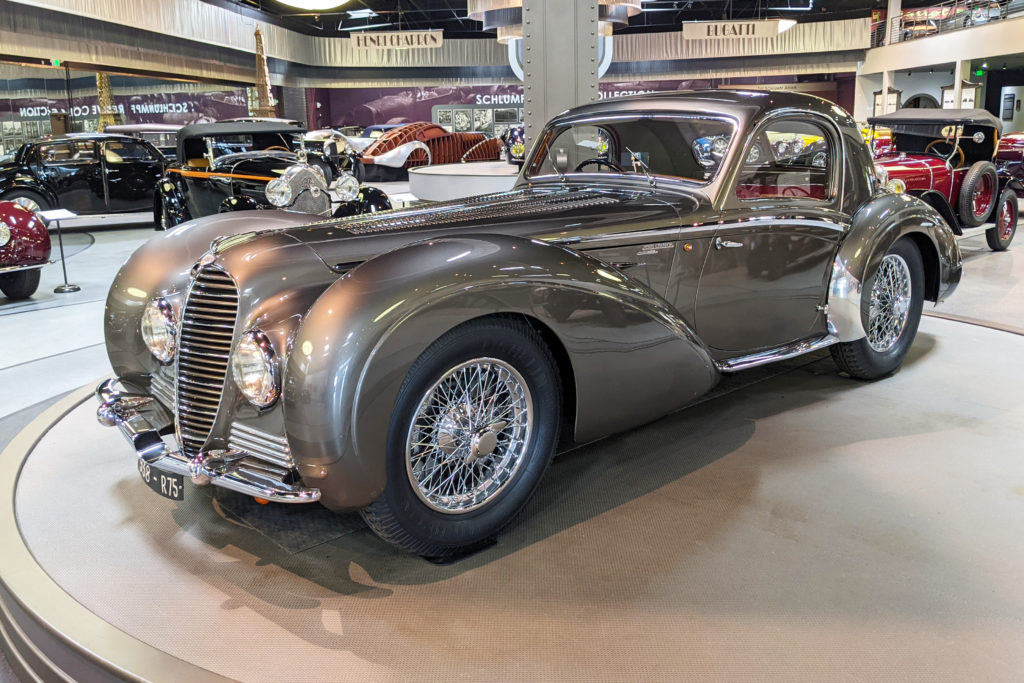 The heart of the Mullin Automotive Museum is its collection of rare and superbly restored vintage French automobiles of the 1920s and 1930s. During this period, aerodynamic body styling was beginning to influence the design of many automobile designers and builders. They used wind tunnel testing and engineering strategies to create smooth and rounded bodies that cut through the air like a hot knife through butter.

Those same designers and builders were also influenced by the Art Deco revolution of the day, leading to the creation of some of the most astonishingly beautiful and technologically advanced automobiles ever built. Museum founder Peter Mullin said, “I became captivated with the body styling of French vehicles from that period. The Art Deco curves make these machines rolling sculptures of art.”

Founded in 2010 and located in Oxnard, California, the Mullin Automotive Museum is dedicated to educating guests about 20th-century French automotive styling, design, and technology. With more than 100 vehicles in the collection ranging from early horse-drawn carriages such as the Kellner Carriage “Break de Chasse” built in the 1800s to the 1951 Talbot-Lago Type 26-GS powered by a 4483cc inline 6-cylinder hemispherical-head gasoline engine that was parked just inside the museum entrance the day we visited.

The current exhibit housed in the Mullin Automobile Museum’s main hall is titled “L’Epoque Des Carrossiers: The Art and Times of the French Coachbuilders.” It’s a rare vintage car gold mine with over 30 vehicles on display, representing the unparalleled skill and craftsmanship of the most revered French master coachbuilders of that time.

This era of coachbuilding was marked by the elegant automobiles commissioned by some of society’s most prominent members. Designers crafted bespoke works of rolling art atop powerful chassis manufactured by car builders.

The main exhibit hall showcases the works of preeminent French automobile designers and builders such as Bugatti, Gabriel Voisin, Figoni and Falaschi, Chapron, Million, Citroen, and others that helped create the remarkably beautiful automobiles of the 1920s and 1930s.

Highlights of the current exhibit included outstanding visions of automotive craftsmanship, such as the 1939 Delahaye Type 165 Cabriolet designed by Figoni and Falaschi. The Type 165 Cabriolet (Delahaye’s production version of the successful 145 racecars) ran a retooled 145 V12 racing engine.

In fact, it was a Delahaye that sparked Mullin’s interest in French cars. “A good friend asked to use my house as a backdrop for a photoshoot. When I saw his green Delahaye glimmering in the California twilight, it was the most gorgeous thing I’d ever seen at the time, spurring my love affair with French automobiles,” Mullin said.

Some of our favorites were the 1922 Hispano-Suiza Type H6B “Skiff Torpedo,” powered by an aluminum inline-six-cylinder engine. The custom “torpedo-shaped boat” inspired wooden body was created by Henri Labourdette. The 1939 Bugatti 64 Coupe was another standout with its radical use of duralumin (a lightweight aluminum alloy used in aviation) for its riveted body.

Also on display was the gorgeous 1939 Bugatti Type 57C Aravis, considered by Jean Bugatti to be the most beautiful Type 57. This Type 57C hides an inline 8-cylinder engine under that sweeping Gangloff-built body.

Beautifully designed road cars are always interesting, but race cars are also a big hit with many automotive enthusiasts. The Mullin Automotive Museum had quite a few outstanding examples of unique competition cars, such as the 1923 Voisin Type C6 Grand Prix car. The Type C6 was revolutionary in its aluminum monocoque design and aerodynamic design inspired by an airplane wing.

In a special section of the museum, you’ll find a row of unrestored cars. They almost look out of place among the dozens of crisp and glossy cars on the main museum floor. These cars are the “Schlumpf Reserve Collection,” a collection of unrestored vehicles that once belonged to the Schlumpf family, one of the leaders in the European textile industry of the day.

One of the most unusual exhibits in the Mullin Automotive Museum is the “Lady of the Lake.” This 1925 Bugatti Type 22 Brescia Roadster spent some serious time at the bottom of Lake Maggiore in northern Italy.

The story goes that the car once belonged to Grand Prix driver René Dreyfus who lost it in a poker game to Swiss playboy Adalbert Bodé. Bodé left the game with his prize but no cash and couldn’t pay the duties at the Swiss border. The Swiss border guards took possession of the car and later dumped it in the lake.

The Type 22 was recovered in 2009 and is now on display in a dimly lit space to replicate what it must have looked like at the bottom of the lake.

Not everything in the museum is of French origin. Among those “others” is the 1938 Tatra Type 87 with its fish-like dorsal fin and three headlights with a center lamp. The 1938 Tatra Type 87 is a Czechoslovakian (now the Czech Republic) car, but the main designer was heavily influenced by the Western European school of automotive aerodynamics and design.

Rare and beautiful cars aren’t the only gorgeous items you’ll find in the 47,000 square feet, two-level exhibit space. The same Art Deco styling of the day that went into many of the automobiles found in the Mullin Automotive Museum also went into furniture, decorative arts, painting, and other automotive-related objects, and the entire exhibit makes a nod to this bygone era.

Spirit of the Mullin Automotive Museum

Mullin is not only the museum’s founder; he is also a devotee of fine automotive design and culture. Mullin supports classic car events such as the Pebble Beach Concours d’Elegance as well as others around the world. His enthusiasm for fine automobiles extends to driving them too. Mullin has entered and driven his cars in vintage races and rallies for nearly three decades.

However, the museum is more than just a building. The Mullin Automotive Museum Foundation also supports non-profit public charities that are focused on education, preservation, and public display of classic automobiles.

When planning your visit to the Mullin Automotive Museum, keep in mind that, with a few exceptions, the cars in the collection are routinely rotated in and out of display and storage. Call ahead to find out what cars will be on display. Information about location, ticket prices, special events, new exhibits, and hours can be found on the Mullin Automotive Museum website.

For a look at other automobile museums with vintage and rare cars, check out these virtual car museums.


Amphibious Russian 4x4 Named Sherp is the Ultimate Toy
Van Life: Evolution Of The Mercedes Van Cockpit
The 7 Fastest And Weirdest Cars and Their Ads of the 1970s!
7 Future Classic Cars To Buy Before Prices Skyrocket
10 Most Expensive Production Pickup Trucks
Cars So Weird They Could Have Only Come From The '80s

A passion for anything automotive (especially off-road vehicles), camping, and photography led Stuart to a life exploring the mountains and deserts of the Southwest and Baja, and a career in automotive, outdoor, and RV journalism. He has held editorial staff positions at publications such as Four Wheeler, 4Wheel & Off-Road, Jp (all-Jeep), Trailer Boats, and Camping Life. When not behind a camera or in front of a computer, Stuart can often be found behind the wheel.