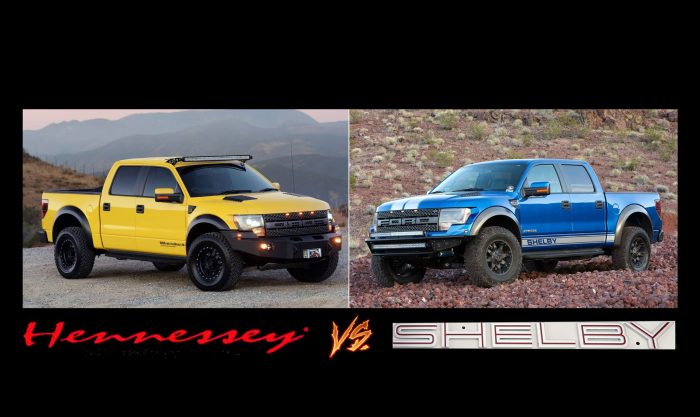 With the Ford Raptor production in hiatus, there’s a void in the truck market for 2015, which two of the best known Ford tuners are more than ready to fill.

Shelby and Hennessey have taken two completely different approaches to the upgrading  of Ford trucks for off-highway duty. The Shelby team mods an existing Raptor while the Hennessey crew starts off fresh with an aluminum 2015 Ford that shaves 700 pounds off the old truck.

It should be noted here a couple of points of information. First, while the Hennessey truck is named the VelociRaptor, it is not built from a Ford Raptor, but rather a standard Ford truck. The other is that if you already own a Raptor and want to go the Shelby route, the Shelby team expects to keep all the OEM Raptor pieces they replace as part of the conversion. Good things to know. 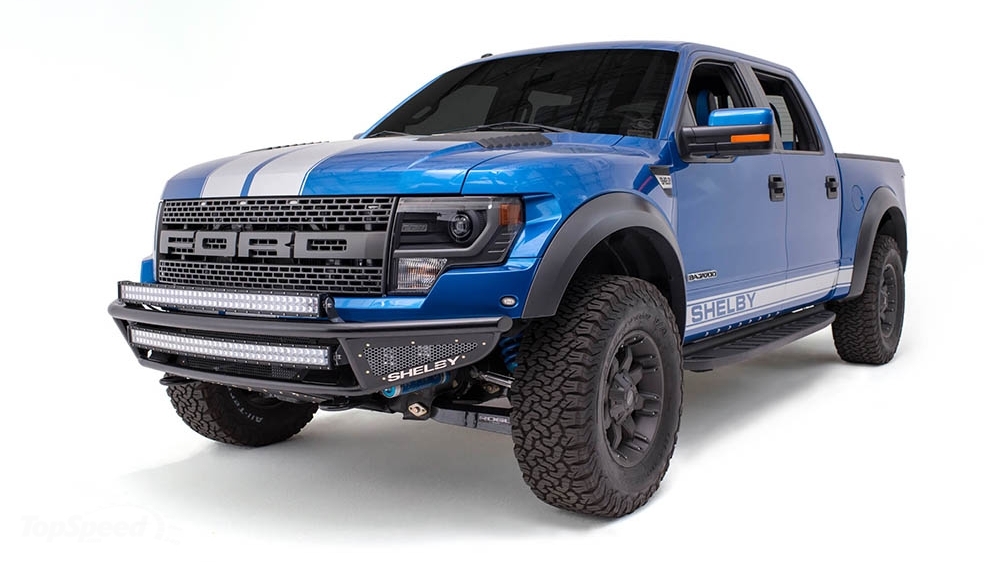 While we’ll get to price shortly, a question that has to be asked is: are these trucks worth the money that the two companies are asking for them?

Let’s go through the two trucks in detail:

According to Hennessy the 2015 VelociRaptor 600 name relates to the 600 horsepower produced through the Roots-type supercharger which is blowing at 8 psi of boost. Helping the 5.0L V8 breathe more deeply is a high-flow air induction system and stainless-steel exhaust system. Upgraded fuel injectors will help feed the supercharged V8, under command of Hennessy’s proprietary engine management calibration.

The new Shelby Baja 700 is built on the 2011-2014 Ford SVT Raptor, is powered by a 6.2L V8 engine fed by a Whipple supercharger coupled with bigger throttle bodies and injectors, plus a more robust heat exchanger and a Borla exhaust system. The supercharger increases power from the stock 411 horsepower rating of the Ford SVT Raptor and takes it up over the  700 horsepower mark.

The Hennessey package leaves to choice of any suspension upgrades to the purchaser, but each VelociRaptor 600 Supercharged will be delivered on 17″ Hennessey wheels and 33″ BFGoodrich tires. 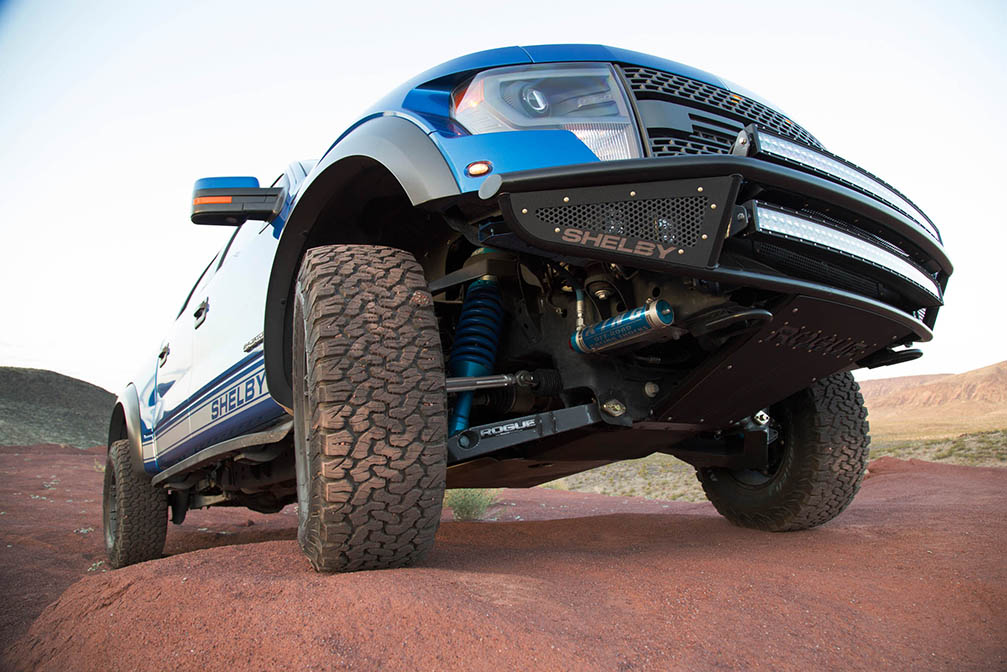 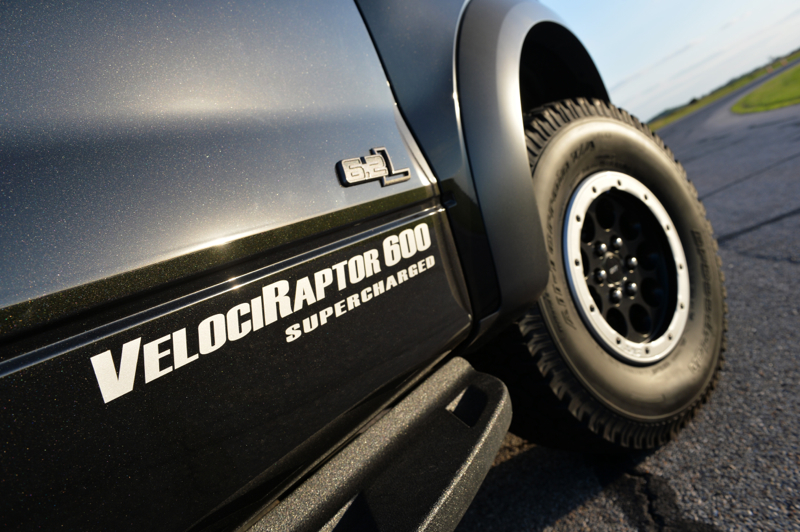 The Shelby Baja 700 features exterior badging on the tailgate, fender vent, and on the stripe package. On the inside, look for a Katzkin custom interior, Shelby Baja 700 floor mats, and a unique three gauge dash pod.

The limited edition Shelby Baja 700 starts at $45,000, not including the base Raptor. Only 50 of these limited edition trucks will be built exclusively at the Shelby American factory in Las Vegas, and each will be numbered and documented with a unique Shelby CSM number and entered into the official Shelby Registry. There was no mention of a third-party warranty in any of the Shelby materials.

My vote goes to … neither. What each company is offering is really a bag of aftermarket parts that can be purchased by anyone with a credit card and a dial-up connection. In both cases the power increases are fully attributed to the pre-packaged supercharger system sold to them by Whipple.

What I find most disappointing is the Shelby truck. It appears to be nothing more than an assemblage of aftermarket parts bought off the shelf. All you really get that’s not available  online are some stripes and badges, a number placard, and a listing in the official Shelby Registry. To me, adding this truck to the list of extraordinary cars starting with classics like the 289 FIA Cobra is a disservice to the brand. 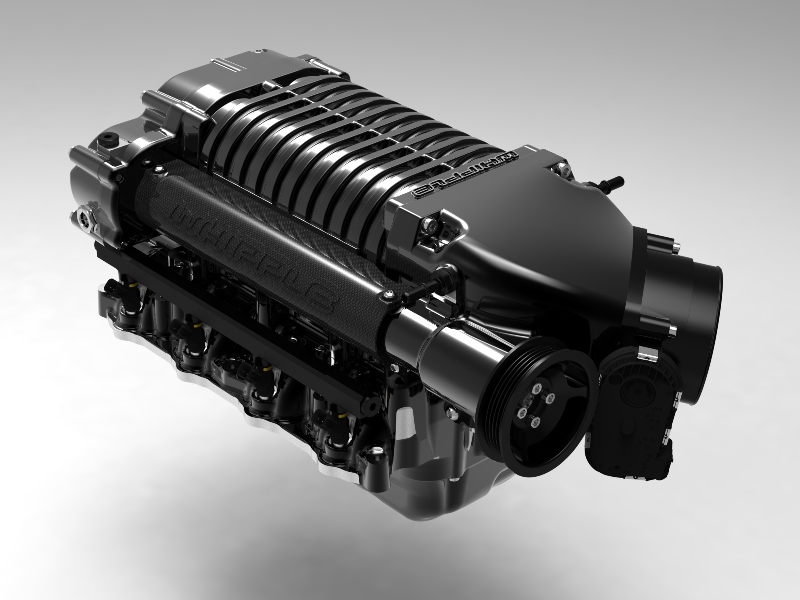 By the way, if you’re the owner of either a Raptor or an F150 with the 5.0L Coyote engine, Whipple will sell you a complete kit, for far less money, that makes the same horsepower numbers that Hennessey and Shelby quote, respectively. The best part is the price. The complete, ready-to-install Whipple kit for the 5.0L is $7395, leaving you with plenty of extra cash to have stickers and badges made with your own name.