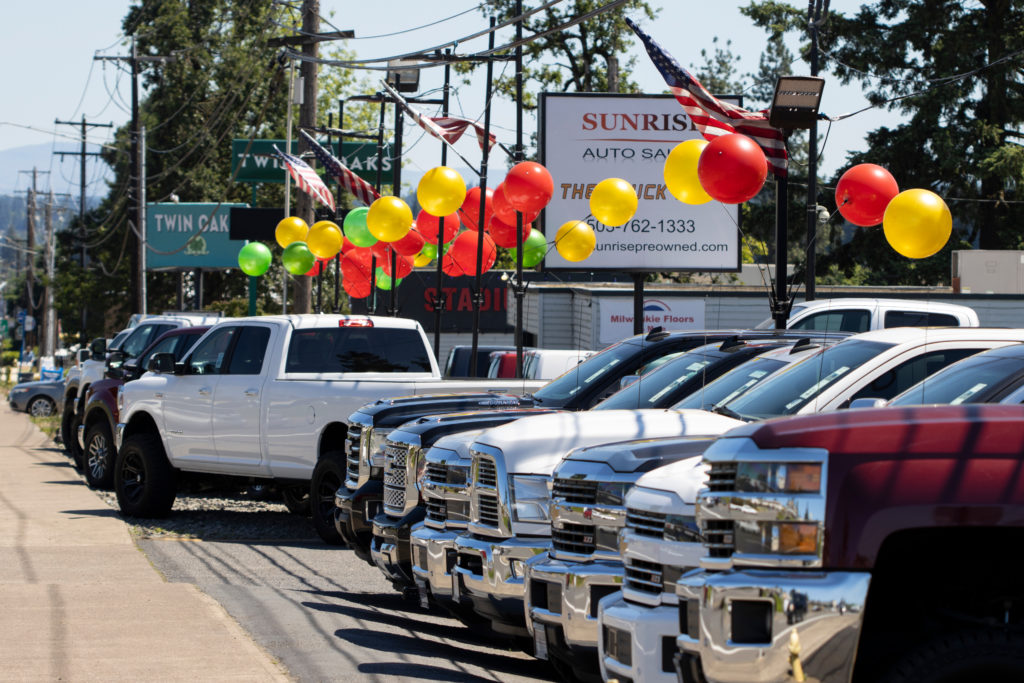 Trucks have long been one of America’s favorite vehicles. Built for both work and play, they offer plenty of room for people and cargo, and they can tow, too. And even if you can’t afford a brand-new truck, with some persistence and a bit of luck, you can still find used trucks under $10,000 if you’re shopping on a tight budget.

In light of the current car sales market, you’ll find that your options are limited in terms of the number of used trucks under $10,000 available. Many of the current offerings are older models with high mileage, though you will still have some choices when it comes to bed size, cab configuration, and available features.

Depending on whether you want a light-duty truck or a heavy-duty hauler, you may find that your options are even more limited. Below we’ve outlined 10 of the best used trucks under $10,000 that you can find on the market today.

Though many of these trucks are older, these models will be your best bet for finding a used pickup in decent condition that still has some miles left. As with any used vehicle purchase, be sure to do your homework before buying. 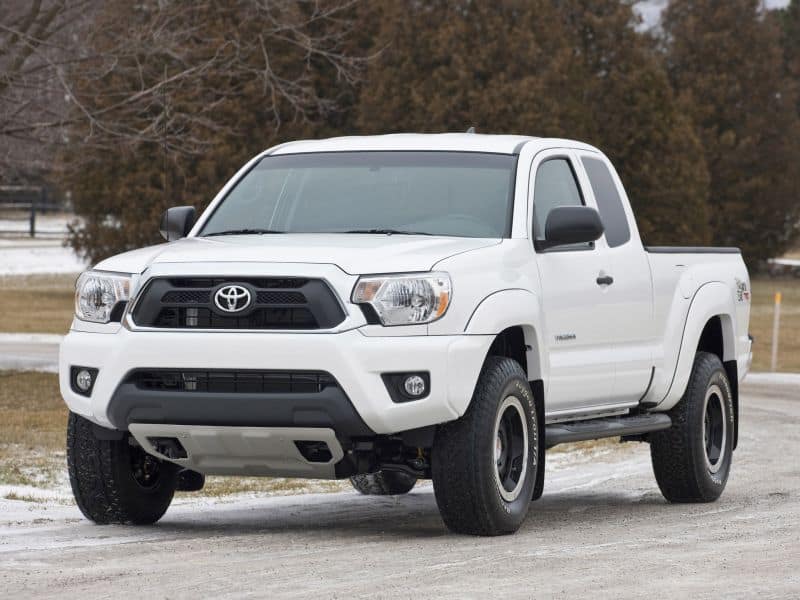 The Toyota Tacoma has long been one of the best-selling mid-size trucks on the market. If you want a compact pickup that is known for its reliability, you’ll be hard-pressed to find a better option than the Tacoma. For under the $10,000 mark, you’ll likely be looking at models from the early to mid-2000s which spans the first and second generation of the Tacoma.

The Tacoma was offered with several cab configurations and truck bed lengths, so keep an eye open when shopping online. Opt for the two-wheel-drive, short bed, single cab if you want something maneuverable and light. Otherwise, the larger option — the extended or double cab of the second-gen models —  with 4WD should satisfy all your weekend outing needs.

Additionally, Tacomas have superior resale value. When you’re ready to sell, you should be able to get a good price for your truck, as long as you took care of it. And the cost of Tacoma ownership is usually low making this versatile truck a great bargain option. 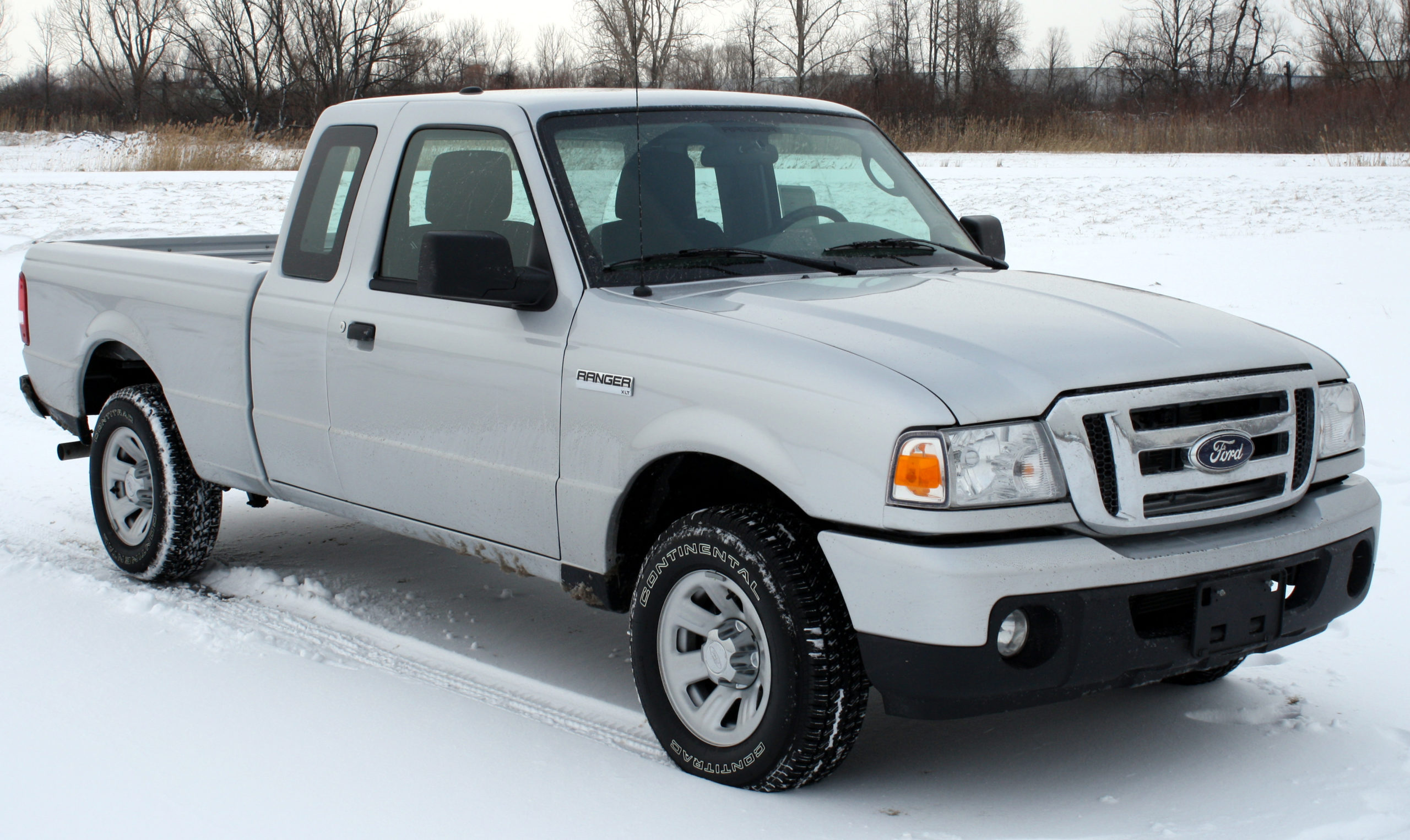 With all the hype surrounding the Ford Ranger these days, it would be fun to drive a used model if you can’t afford a shiny new one. The third-generation Ranger (1998-2011) was a staple in the American automaker’s lineup and came in regular and extended-cab body styles.

Though this compact truck didn’t have all the bells and whistles, it was durable and utilitarian. The Ranger was available with either a 4 or 6-cylinder engine, though the 4.0L V6 is the way to go if you can find a used truck under $10,000 with that option.

And good news for your wallet — if you need any parts down the road, you won’t need to look far or pay a fortune. Ford made a generous supply of parts for the Ranger, making this an affordable truck to repair. 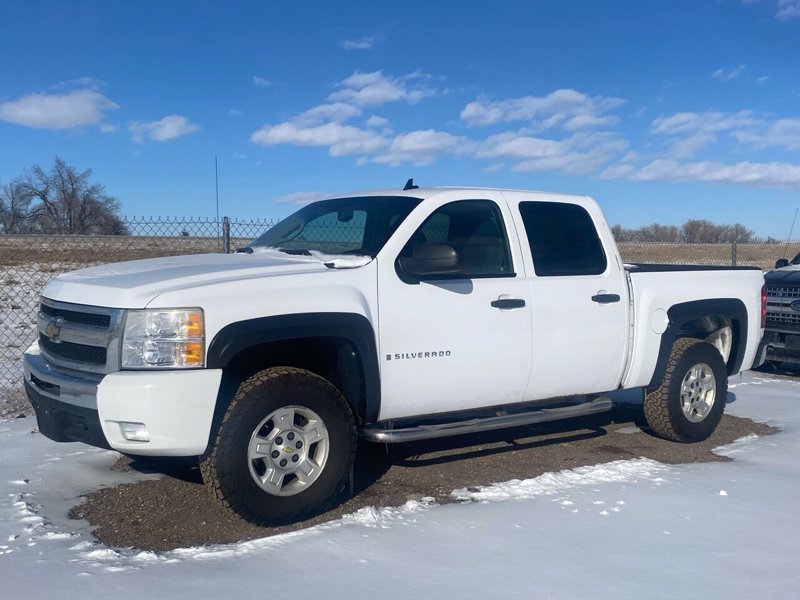 For more than two decades, Chevrolet has offered the midsize 1500 which has proven itself time and time again to be a well-built option for the American driver. Chevy has sold about 400,000 Silverados annually since the end of the 1990s.

Over the years, the Silverado has been offered in more than a few configurations. You can opt for everything from a single cab, short bed V8 to a crew cab V6 or a quad-cab V8. For under $10,000, you find plenty of first or second-generation 1500s spanning the 1998-2007 year models to choose from with more than a few bare-bones work trucks thrown into the mix.

If you like to go off-road, you’ll even find that this is one of the more capable 4×4 trucks, often optioned with Chevy’s off-road package. And if you can’t find one already equipped with the off-road goodies, the Silverado 1500 has plenty of aftermarket support should you decide to make the truck even more off-road capable. 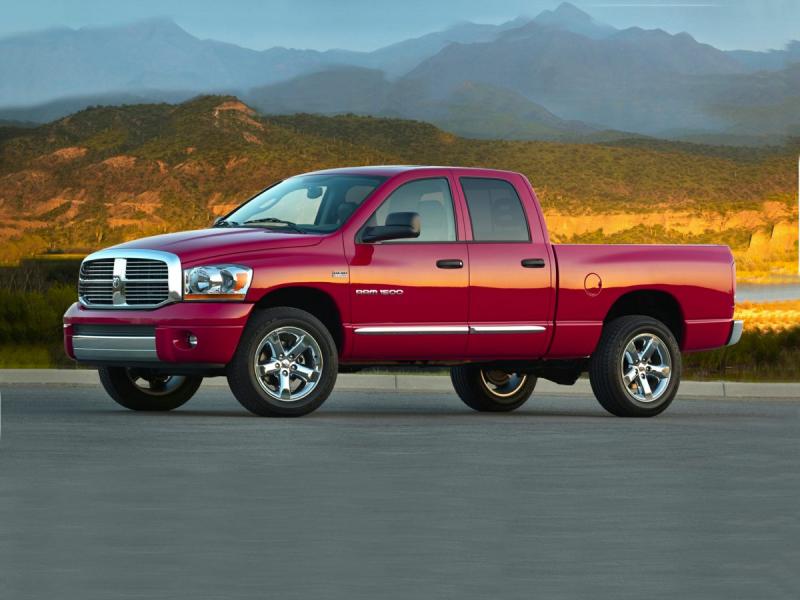 Just like its Ford, GMC, and Chevy competitors, the Dodge Ram 1500 is a good, all-around package. Even the older versions of this truck have exceptional payload capacity and ample power. What Ram does differently, though, is add a little more style than some of the other used truck options on the market.

In your search for a used truck under $10,000, most of the Dodge Ram 1500s available will have high mileage — definitely north of 150,000 miles with some used models clocking in around 200,000 miles — though you should be able to snag a slightly newer model year from the truck’s second or third generation, in the range of 2011-2014. 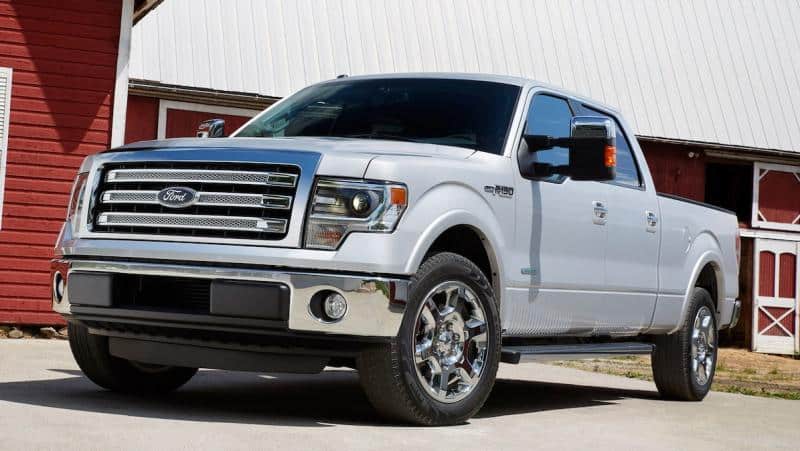 The Ford F-150 has long been one of America’s favorite trucks and for good reason. If you aren’t worried about a truck with high mileage, you should have no trouble finding an eleventh-generation F-150 (2004-2008) in your price range. If you have a little extra money to spare, go for the twelfth generation (2009-2014) instead.

The best reason to consider a newer generation model if you can afford it is so you can opt for the EcoBoost engine which is quite fuel-efficient. Of course, you won’t find as many F-150s in your price range, so if you need a specific setup, you’ll have better luck shopping for older generations of the Ford F-150 instead.

The good news is that these well-made, workhorse trucks hold up well and are known for their reliability and ease of maintenance. Whether you need a truck for work or are looking for a weekend hauler that can tow a small load, the F-150 is a versatile option with a long history to back it up. 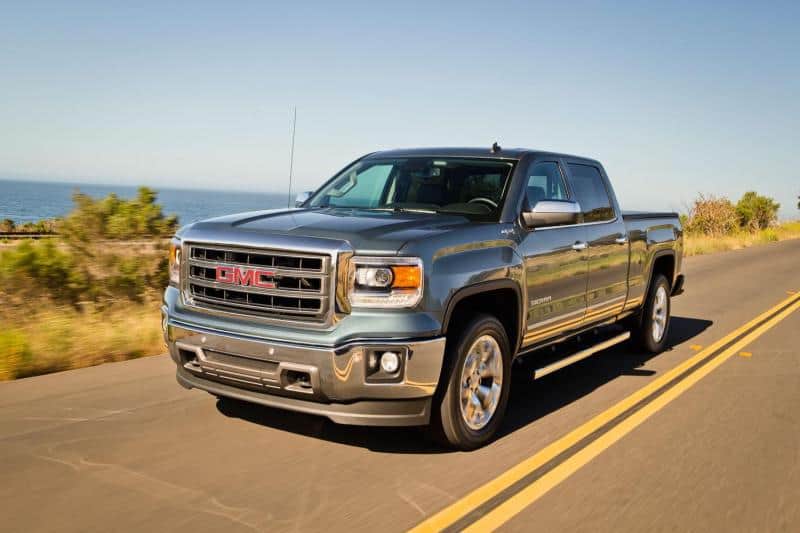 The Silverado and Sierra are twins, except the GMC version of this truck is a little more classy and upscale. Put in other terms, the Silverado 1500 was made to be a work truck, while the Sierra 1500 is a great family hauler or daily driver with a few extra creature comforts. And it is plenty durable to do some heavy-duty hauling too if that’s what you have in mind.

The Sierra 1500 could be optioned with many different packages. When shopping for a used version, you can often find a variety of trim levels, cab sizes, bed lengths, and engines. Although the higher-end trim packages might blow your budget. 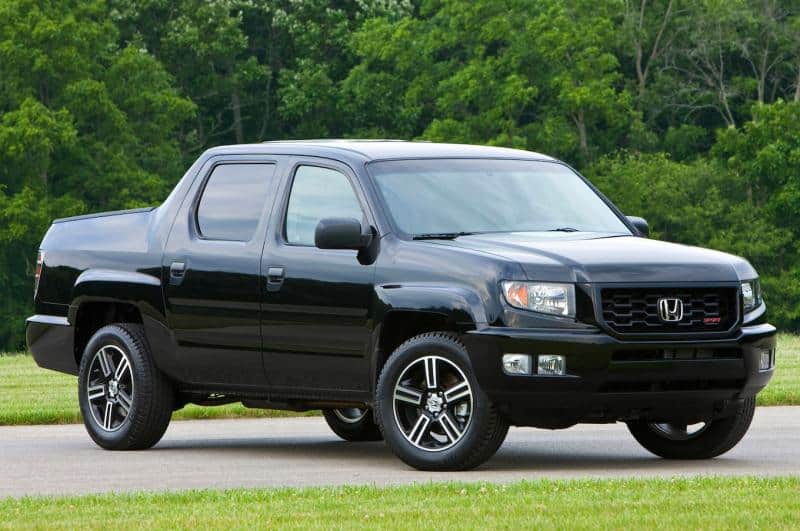 If you want a truck that rides like an SUV, you’ll be thrilled with the Honda Ridgeline. It shares the same underpinnings as the Acura MDX and Honda Pilot.

This unibody pickup also has the fuel economy of a compact pickup to save you some cash at the pump. The Ridgeline is more suited to a commuter lifestyle than that of a heavy-duty hauler. For under $10,000, you’ll be shopping the first-generation Ridgeline which was in production from 2006-2015.

And don’t get us wrong; the first generation isn’t lazy. It still is capable of towing and has plenty of space in the bed. It also comes with an in-bed trunk, barn-door opening tailgate, and a flatbed floor — all great features for hauling smaller gear and weekend toys. Backing all that up is Honda’s reputation for reliability — never a bad thing when shopping used trucks. 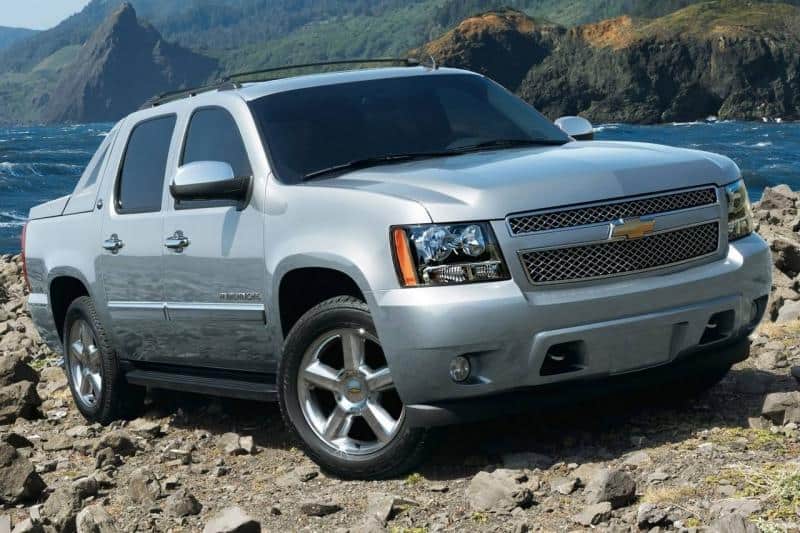 The second-generation Chevrolet Avalanche (2007-2012) is a light-duty pickup option that can be found used for under $10,000. The truck came with an extendable bed with a fold-down rear truck wall. This mid-gate makes the truck extremely versatile, depending on what type of gear you want to haul.

This generation also featured some great crash test scores, making it a great family vehicle. The Avalanche also had a more refined, SUV-like ride and the standard V8 engine gives it plenty of punch. The second-gen Avalanche was available in three trim levels as well.

Finding a used model with lower mileage (most models for sale are sitting around 200,000 miles) will be a challenge, but if you spot a low mileage, well-maintained Avalanche under $10,000 you might have scored a deal. 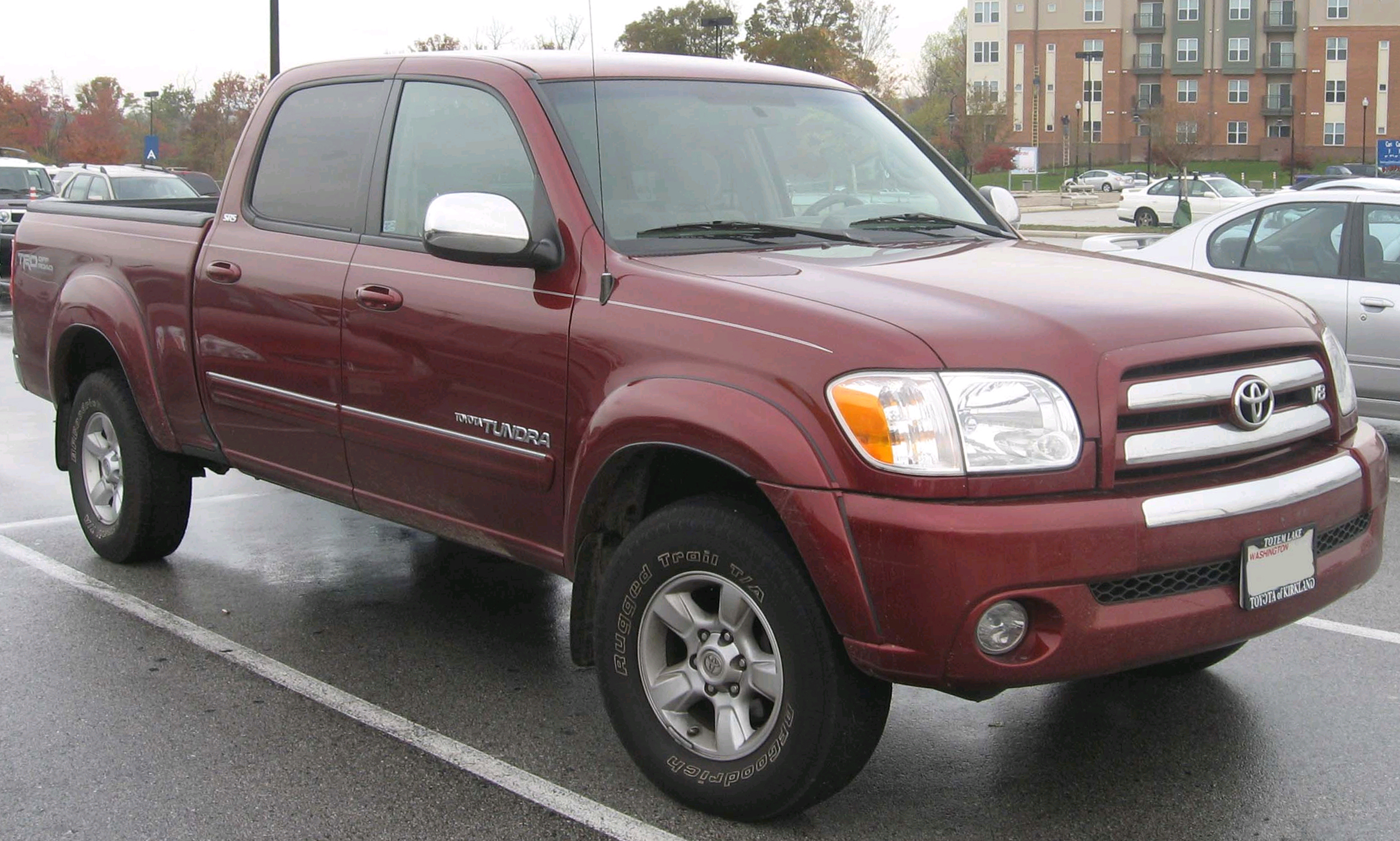 Because of its many generations and long production run, you should feel confident that the Toyota Tundra is one of the more reliable used trucks under $10,000 that you can find. You might have to go for one of the earlier generations to stay within budget, but even an older Tundra can still prove to be a worthwhile investment.

In terms of a Tundra under $10,000, you’ll likely be looking at a higher mileage model from the early to mid- 2000s, but thanks to Toyota’s renowned reliability, if you can find an older truck that’s been well-maintained, a Tundra can definitely be a reliable, budget-friendly option.

Opt for the four-wheel-drive double cab for added space and utility. If you plan to stick to the pavement, a two-wheel-drive regular cab might fit the bill. The Tundra was available with either a V6 or V8 so if you plan on towing, keep an eye open for the beefier V8 option. 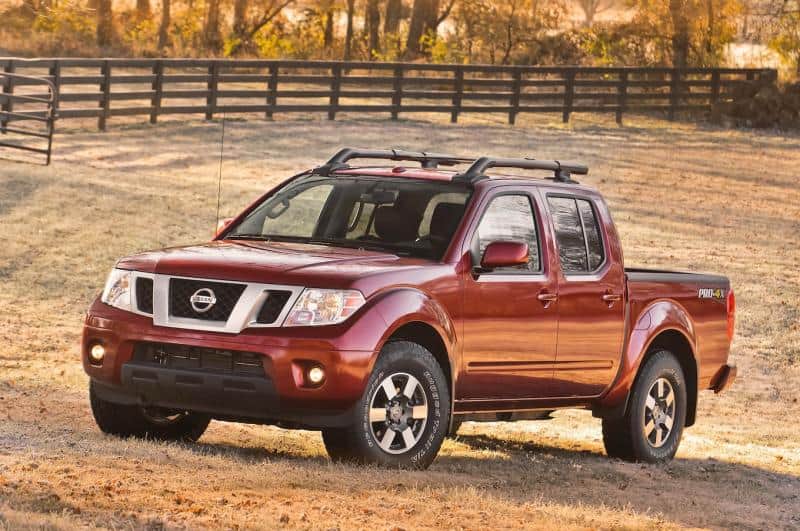 The second-generation (2005-2021) Nissan Frontier never reached the same popularity as the Tacoma, but because it wasn’t as popular, you might be able to find an older model year on the cheap. This midsize truck was capable and dependable in its own right and is worth a look when you’re shopping for used trucks under $10,000.

The Nissan Frontier was available with either an extended King Cab and crew cab configurations with either a 4- or 6-cylinder engine. Both rear-wheel-drive and four-wheel-drive were options. For under $10,000, you should be able to opt for a Frontier with a mid-level trim.

Many of the two-wheel-drive models have relatively low mileage (compared to other used trucks under $10,000 on the market). It’s even possible to score an off-road Nismo with a supercharged V6 if you’re willing to go for a higher mileage model.

If you need to stick to a budget, but still want a quality pickup, you have a few options for trucks under $10,000. It might take a little extra leg-work to find the truck that suits your needs. All of these pickups offer reliability, comfort, and power — in a budget-friendly package that will get you where you need to go.