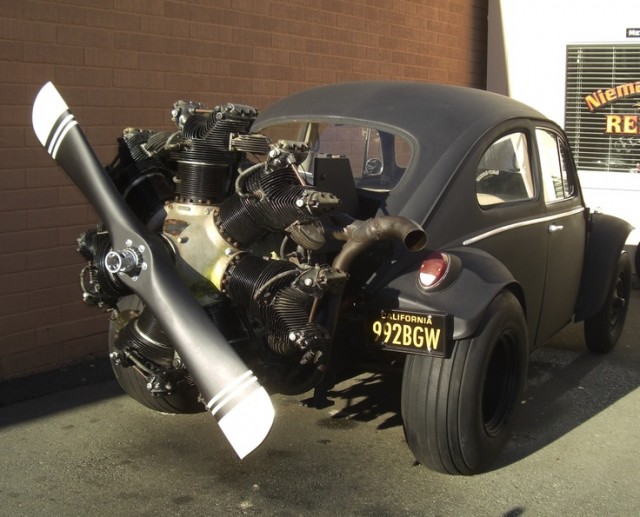 There’s no V8 in a Mini Cooper here. These swaps are so out there they could have only come from mad geniuses, or someone missing some grey matter, or both.

There are cars so outside the box here that they’ve been pulled over by the cops, and then the cops can’t figure out what to charge the owners with. We’ve got everything from a diesel from a bread van to a radial aircraft engine from the 1930s that was mounted in a tank. Read on… 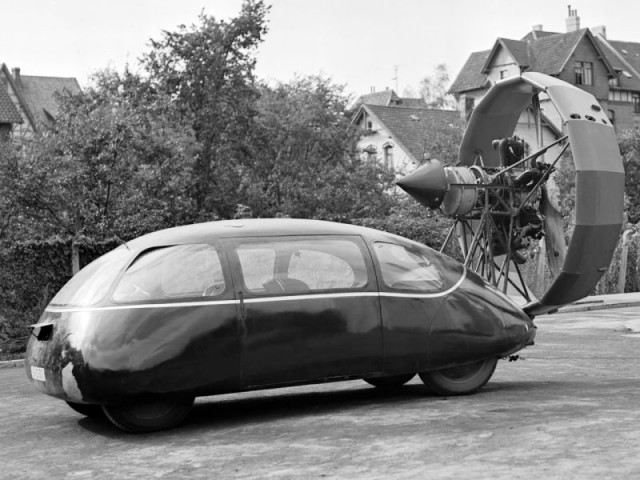 Say you have an older Baja Bug (tastefully updated with a matte black paint scheme) but are at a lose for what engine to install. Every version of VW, Porsche, and Corvair has been done to death. There are even VWs running around with Small Block Chevys hanging off the back. No, to be truly original you need a Continental W670-9A seven cylinder air-cooled radial aircraft engine. The engine, which was first introduced in 1934, is rated at 250 horsepower and weighs 550 lbs. While primarily an aircraft engine it was used in a variety of applications, and this 1941 model was pulled from an M2 tank. Bore is 5.125 inches with a 4.625-inch stroke, giving the engine total displacement of 668 CID. While the car was finished a coupe of years ago with plans to take it to Bonneville to determine it’s ultimate performance, but as of yet the VW’s not hit the salt.

During WWII Ford was a huge defense supplier building bombers, Jeeps and whatnot. They also wanted to get into the aircraft engine business, for they developed a monster 60 degree V-12 with four vales per cylinder and DOHC, all cast from aluminum. A pretty modern engine for a company still installing Flatheads in their cars. The Army and Navy said no to the plane engine, but the Army asked if Ford could create a V8 from the V12 to power Sherman tanks. The result was the Ford GAA, the largest Ford V8 ever built. It displaced 1100 CID (18 L) and produced 525 hp and a very tank-like 1000 ft-lbs of torque. Many still exist and one intrepid Mustang racer is in the process of building a car around a GAA. See the big tank motor in the car does help provide a sense of scale of how large the GAA is. 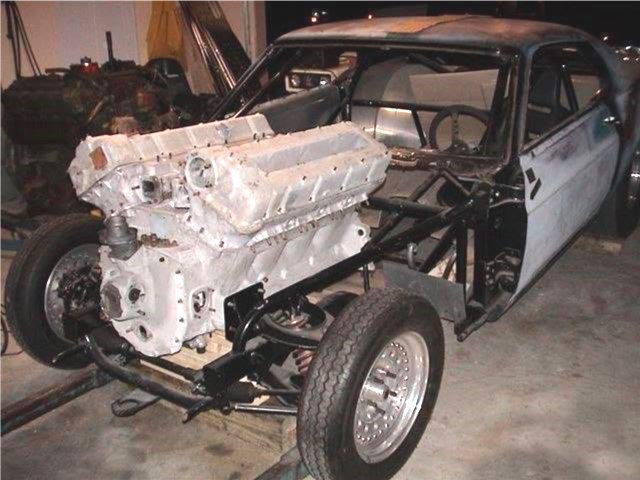 This isn’t actually an engine replacement, but rather the additional of a second engine. A two engine car. There’s a  Cooper “S” engine driving the front wheels, and a Rolls Royce-Allison 250-C20B gas turbine engine driving the rear. This engine, which is not a jet in the sense that it produces thrust from combustion to move the aircraft forward, but rather a gas turboshaft engine – in this case designed to power helicopter rotor blades. Though compact, the gas turbine produces 420 hp with over 400 ft-lb of torque. If you look carefully at the photo, you’ll notice a second rood on the Mini. It’s actually an air intake for the gas turbine, with a control in the cockpit to open the vent for turbine operation or close the vent so that the gas turbine doesn’t ingest rain water, leaves, small children  – you know, the usual stuff. 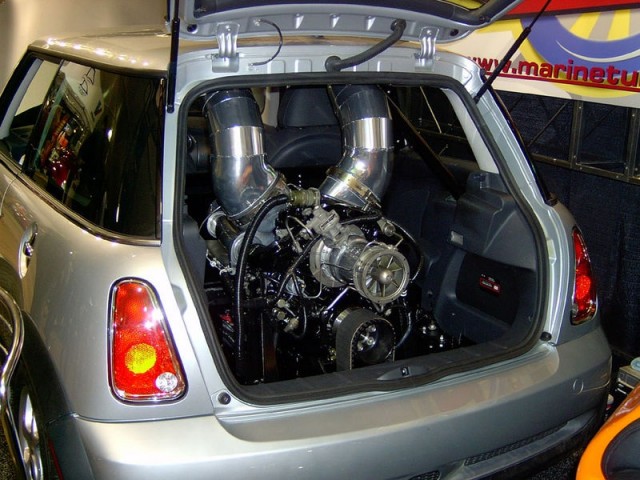 Normally when one sees a 1992 Nissan 240SX with engine swap, it’s the underpowered OEM four-cylinder normally-aspirated engine being replaced by a JDM (Japanese Domestic Market) turbocharged DOHC four cylinder from the Japanese version of the same car. This builder, for whatever reason, went the other direction – in this case Indiana where Cummins diesel engines are manufactured. Well, the engine didn’t come directly from Indiana but rather spent the first part of its career powering a bread van. Now the four cylinder 3.9 L Cummins 4BT fits under the under the hood (mostly) of a Nissan 240 SX. Stock the Cummins produces 105 hp and a modest 265 lb-ft of torque, but has been upgraded with a Holset HX35 turbocharger and a Garrett intercooler. We could find a power rating but one thing you can’t away from is that the engine assembly weights over 800 lbs. (can you say “understeer”?). 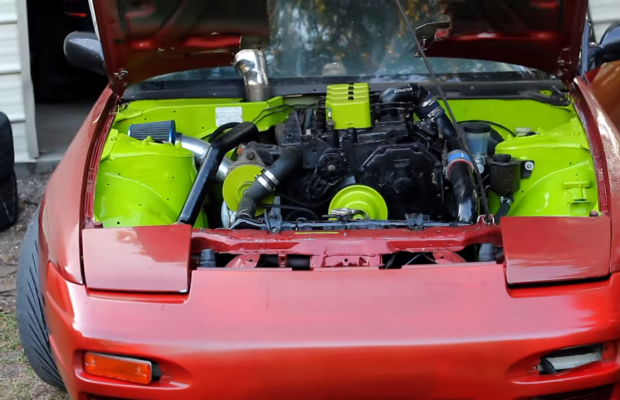 Here’s another dual engine concept, retaining the OEM engine and drivetrain to maintain legality and street-worthiness, but with  a General Electric Model T58-8F in the rear cargo area. This is also a helicopter turboshaft engine that was converted by the builder to a jet engine through some internal modifications and a custom tailpipe (it might be worth mentioning here that the builder has a PhD in Mechanical Engineering from Stamford, so I think we can trust him). The engine spins up to 26,000 RPM (idle is 13,000 RPM), draws air at 11,000 CFM through open windows and the sunroof, and is rated at 1350 hp. The engines comes in at a lightweight only 300 lbs. There’s no mention of any speeds recorded for the jet-assisted VW Beetle, which is probably the way the low-key owner would like to keep it. 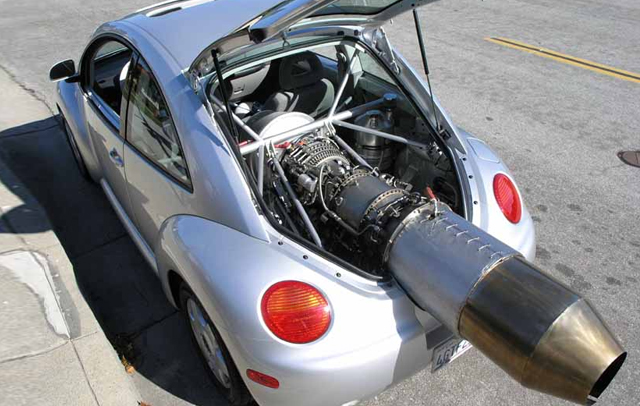 
The 10 Most Groundbreaking Cars in Automotive History
Goodguys Rod and Custom Top 12 Reduced to Top 7 In 2020: Bec...
15 of the Most Outrageously Great Pickup Trucks Ever Made
Why is the 1969 Boss 429 Mustang the Best Muscle car of All-...
Top 15 Old School Muscle Cars You Can Buy
Speedometer Calibration: Does Yours Need Checked?