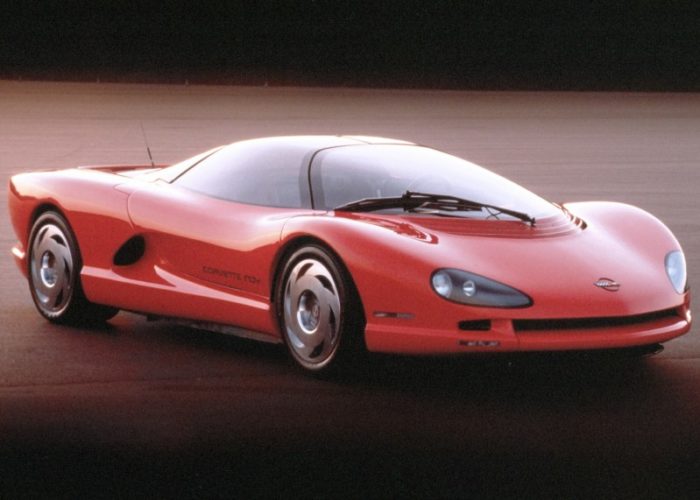 For a period, GM seriously considered developing a mid-engine platform for the legendary Chevy Corvette. Here are the cars with which they explored the mid-engine Corvette concept. 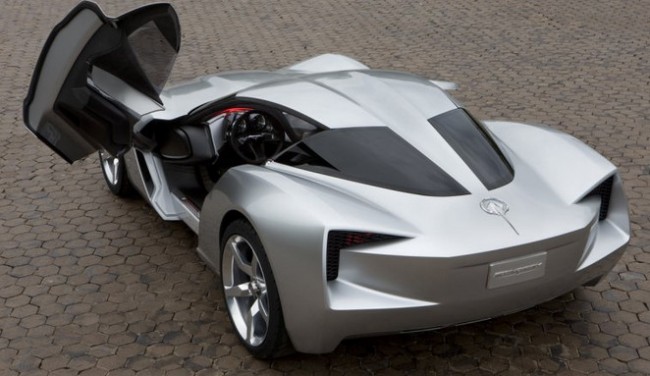 Of course, Ford and its overtures to bring the GT40 to the market as a street car must have had some impact on the boys at Chevrolet Engineering, as did the Lamborghini Muira. Despite numerous concept cars shown to the public over the years at the Detroit Auto Show or at the Chicago Auto Show, with car magazines breathlessly announcing that the next Corvette will be mid-engine, it hasn’t happened. Until now. Or until next year. Or the year after. A mid-engined Corvette IS coming though. Spy shots have proven it because we’ve seen a new mid-engined test mule making its way to the Milford Proving Grounds for road tests, but we’re sick of Corvette spy photos, we want the real thing! Until that day, we can ogle these concepts that never quite made it into production. 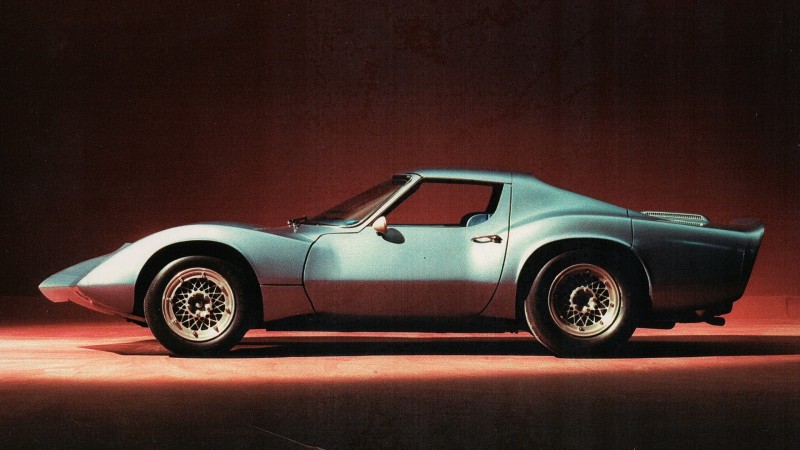 The XP-819 wasn’t really a mid-engine car, but rather had its engine XP-819 was the result of a clash between Zora Arkus-Duntov (The ‘father’ of the Corvette) and engineer Frank Winchell, who’d been involved with the Corvair project. Winchell contended that you could make a balanced, rear-engine, V-8 powered sports car with an aluminum engine and larger tires on the rear to compensate for the rear weight bias. Duntov adamantly disagreed.  A GM marine engine powered the car so the two-speed transaxle from a Pontiac Tempest would operate properly. The entire chassis, suspension, and steering are custom made components unique to this car.

It turned out that Winchell’s theory about rear-engine, V-8 cars was incorrect. The car was demolished on the test track and quickly forgotten. However, stylist Larry Shinoda’s design was well received. Shinoda appears to have picked up styling cues from the Chaparral race cars. It even had Chaparral wheels.

While not a true mid-engine car, it was in reality a rear-engine car with its engine hanging out over the back, Porsche style. It’s important to our story as it drove development toward true mid-engine body styles and designs. 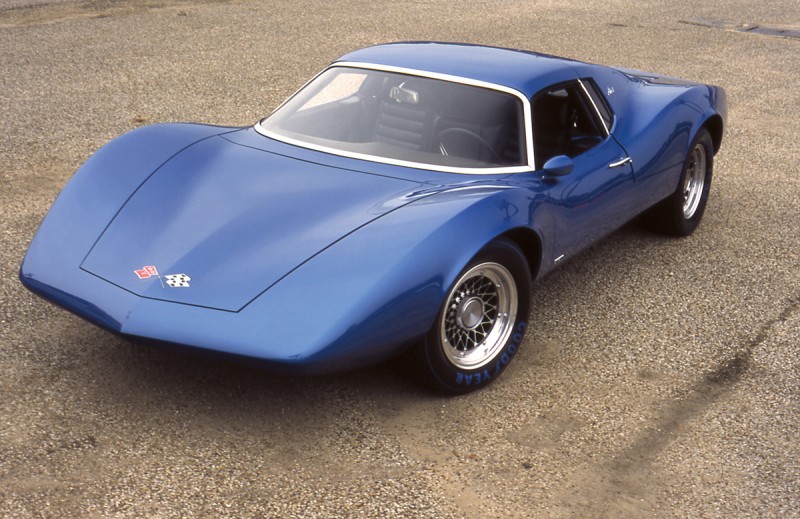 Above all else, it was its success in racing that made the Corvette legend. Sports racing car development in the 1960s was dynamic, with the Ford GT40 and the Chevrolet-backed Chaparral both designed around a mid-engine layout. The XP-880 (Astro II) was the first of several experimental, mid-engine Chevrolet Corvettes that had enthusiasts convinced for more than a decade that the next Corvette would carry its Chevy V8 in the middle of the car.

The Astro II was designed to showcase its mid-engine powertrain application. Chevy R&D’s first mid-engine Corvette positioned a big-block V-8 backwards in the car so the starter and ring gear were behind the driver’s elbow. The torque converter from the Tempest transaxle bolted to what’s normally the nose of the crank. The finished car weighed 200 pounds less than a stock 427 Chevrolet Corvette, but the transaxle was designed for an intermediate sedan, not a 7 liter motor, and couldn’t handle the power.

With its 427 engine, the Astro II was more like a Can-Am racer than a street car. Even with production Camaro and Corvette suspension parts, and performance street tires, the Astro II generated 1.0 g of cornering grip, which at that time was a level only race cars could achieve.  Astro II weighed in at 300 lbs less than a production Corvette, yet had almost the same external dimensions. 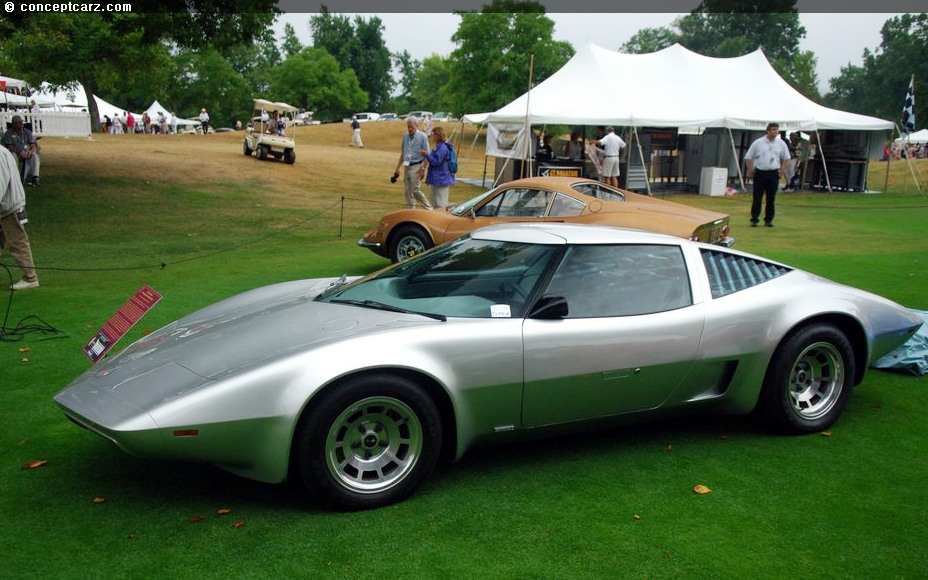 The experimental XP-882 looked production-ready, thus fueling rumors that the next  Corvette would be a mid- engine design. GM built two XP-882 chassis for evaluation, but only one had the bodywork shown here. Zora Arkus-Duntov’s solution to the XP-880’s transaxle problem was to mate a 454 big block V8 to a FWD Toronado transmission, and then mount it all transversely to lower the mass. A bevel-gear driven shaft ran back to a Chevy differential, passing through a hole in the oil pan along the way. It could handle the power, but the powertrain weighed in at a heavyweight 950 pounds. 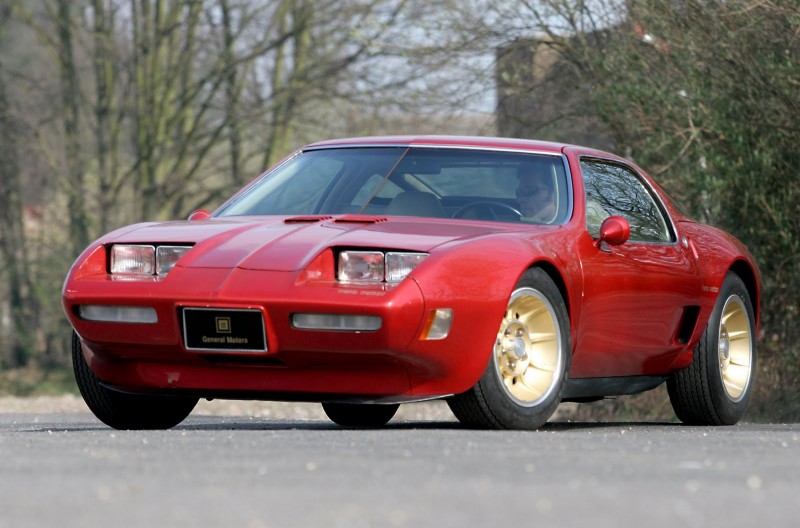 In the early 1970s, a number of manufacturers were experimenting with Wankel rotary engines, GM among them. In the tightly-diminished motors, Chevy engineers saw an opportunity for a better integrated mid-engine design. The XP-897 utilized a 266 CID, 180 hp Wankel rotary engine mounted transversely, driving  the automatic transaxle being developed for the upcoming Chevy Citation. Designed by GM’s Experimental Studio (which was stuck designing the front of the car around the archaic headlight laws of the time) and built in 6 months on a modified Porsche 914 chassis by Pininfarina, the 2-Rotor made its debut at the 1973 Frankfurt auto show. 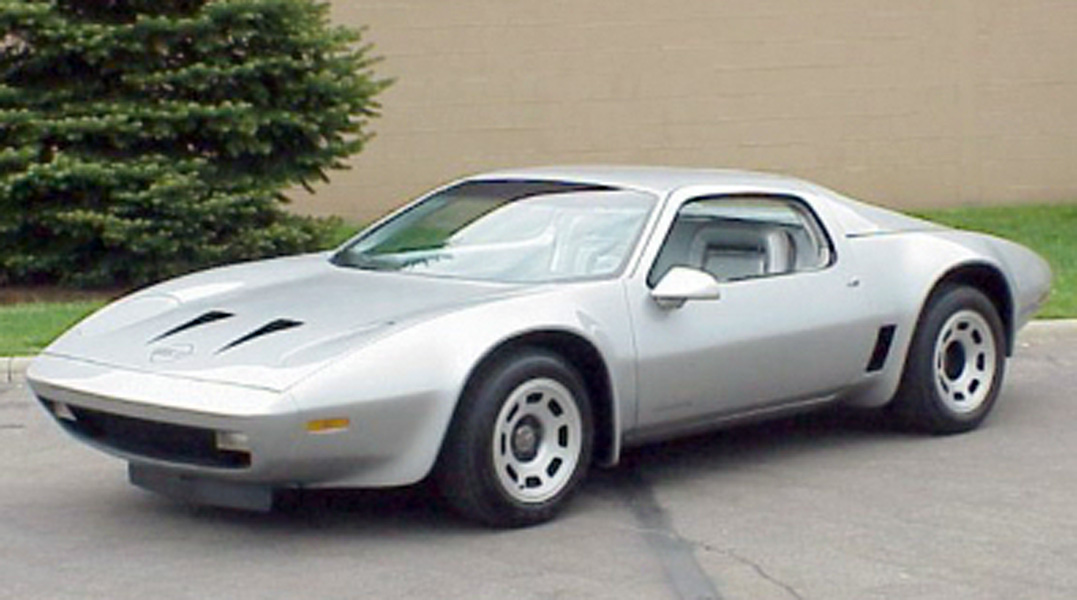 For the  XP-895, a four-rotor engine was created out of a pair of the two rotor Wankels, creating a 420 hp engine . The XP-895 is actually  based on the XP-882 chassis. Somewhere in 1971, Chevrolet Engineering completed a running XP-895 prototype, with primarily steel body panels.

On March of 1972 Reynolds Metals Company, under contract to Chevrolet, begins building a second body for an XP-895 Corvette prototype, duplicating the first steel body in aluminum. On June of that year, the aluminum car was completed and fitted with a 454 V8. Chevrolet unveiled the experimental mid-engine XP-895 Corvette at the New York Auto Show in 1973. The response was overwhelming positive, but it was too expensive to bring to production and the concept was dropped. 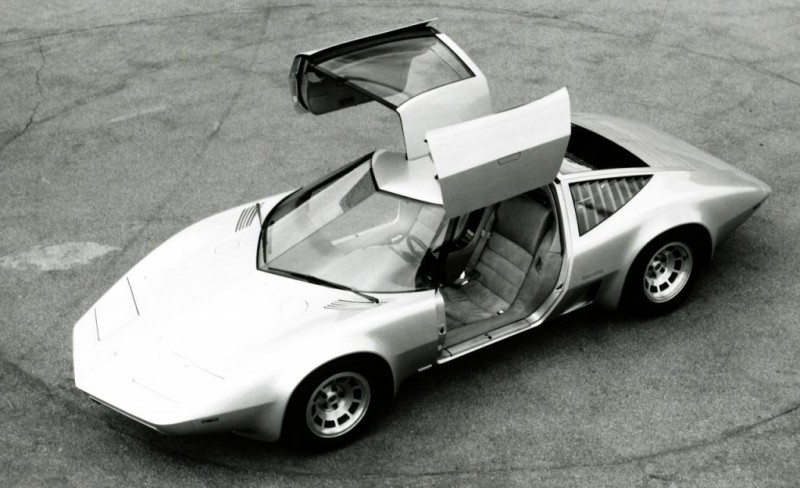 The same XP-882 that had been shown in New York in 1970 served as the basis for the XP-882 Wankel motor prototype.  Built on the first XP-882 chassis it carried the same four-rotor engine as the XP-895.  The very Corvette-like styling cues led many to believe they were looking at the next generation of Chevy’s sports car.

The design, which included radical bifold gullwing doors (like those on the Tesla Model X). The sterling silver paint, with silver leather interior and forged alloy turbine wheels gave the Corvette an appearance unmatched by any other advanced sports car. The interior was also more fully engineered than the show-car norm, which was taken as another indication this model was a serious production candidate.

The car was given a new lease on life by removing the discontinued Wankel program engine and installing a small-block Chevrolet V8, christening it the AeroVette. While it was promoted as the upcoming C4 Corvette for 1980, it never entered production. 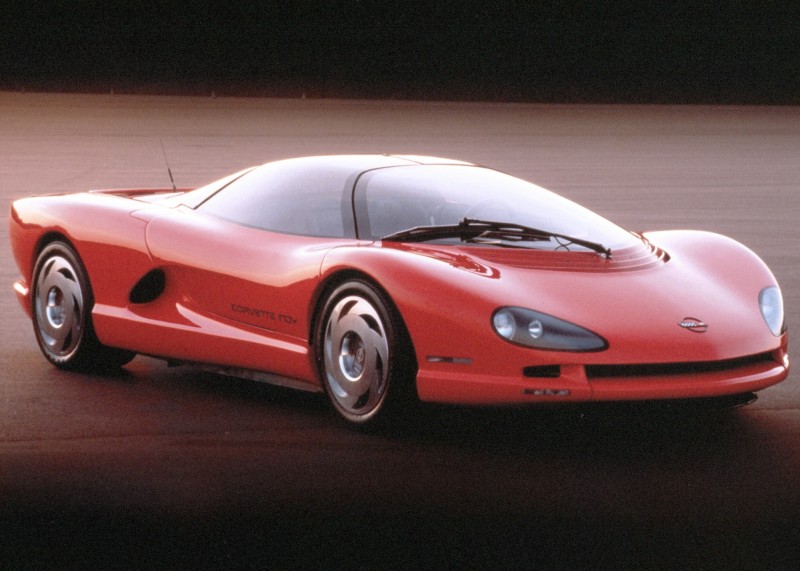 After the introduction of the C4 Corvette, there was a concept car introduced in 1985 to show a possible C5 Corvette.  Called the Corvette Indy, the first example was a silver non-working mockup showing the mid-engine configuration preferred by Duntov.  The silver car was followed by two functional examples.

The Chevrolet Corvette Indy Concept was constructed in 1985 and was powered by a mid-mounted twin-turbo intercooled 32 valve 2.6 liter V8 engine designed by Lotus Engineering (which was owned by GM at the time). The engine was named for the Chevy Indy V8 racing motor. Power is estimated at approximately 600 hp.  Created to showcase Chevrolet’s advanced automotive technology, the Corvette Indy concept featured 4-wheel drive, 4-wheel steering, active suspension and a rear view camera with in-dash view screen. Indy incorporated many “advanced” technologies that are now standard on most cars, including ABS, electronic traction control and electronic throttle control.

Bonus: A Mid Engine Corvette Restomod! Love It Or Hate It?

It’s difficult to find a car more polarizing than the V7 Corvette, a restomod Chevy rebuilt into a mid-engined configuration. There are those who love the audacity of the concept, and applaud the builder for creating what General Motors hasn’t (though they’ve hinted they would several times over many years). That is, build an actual mid engined Corvette.

On the other side of the aisle, both Corvette purists and those who appreciate fine automobile design abhor the V7. The proportions, they say, are wrong. The car ends up with the proportions of a Corvair or worst yet, a Karmann Ghia. The wheelbase should be longer, the windshield tipped back, and the design features altered to better suit the shape, they say.

In either case, there’s no shortage of supporters or detractors willing to take on the fight. A little more on the body:

The cab forward design of the V7 allows the engine to be viewed through the original rear windows openings. Stretching the rear quarters panels forms functional air intakes that aid in cooling and help generate aerodynamic grip.

One enters the cockpit through what the builders call “suislide” articulating door system that works a bit like sliding doors in a minivan. The original Sting Ray dash humps have been fitted with Auto Meter gauges. Adjacent to the steering wheel are paddle shifters for the transmission. The cabin is fitted with race-style seating with a five-point harness system. Conveniences include power windows, heater and air conditioning. The car was built without an audio system, as the owners preferred to listen to the twin turbos “spooling up.”

Here’s the scoop on the mechanicals: A custom tube dual ladder frame forms the base, fitted with a fully adjustable suspension. Stopping power is provided by six-piston calipers with cross-drilled rotors. All this rolls on custom HRE wheels clad with Michelin’s widest production-based rubber. The V7 Corvette engine is powered by a Chevrolet LS twin turbo V8 that’s been dyno’d  at 1,000 HP and 915-lb/ft of torque. Zero to 60 times of 3 seconds are reported.
Do you love it or hate it? Either way, it’s the closest thing to a new mid engine Corvette that we’re likely to see until the covers come off of the rumored new model! Until then, you can always swoon over the latest Chevrolet Corvette ZR1 instead!