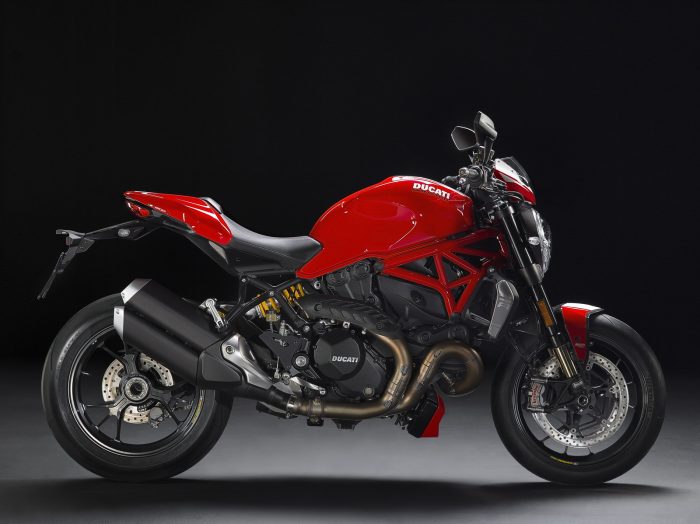 To call the recently unveiled Ducati Monster 1200 R impressive is somewhat of an understatement. 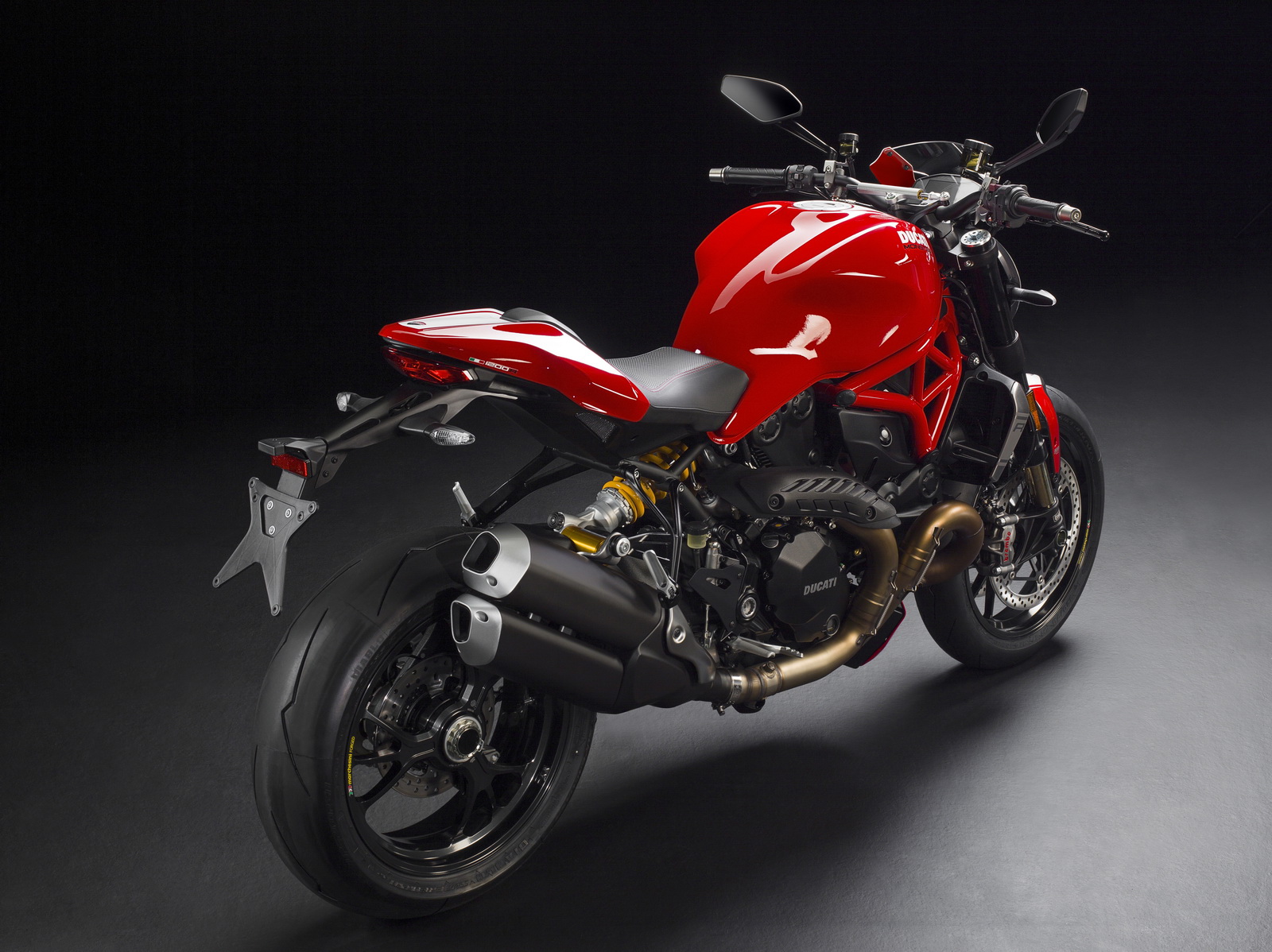 According to Ducati the new Monster 1200 R is supposedly the most powerful, most refined and quite possibly the fastest naked bike that they’ve ever made. The iconic Desmodromic liquid cooled, eleven degree Testastretta “L” twin engine boasts a whopping 158 hp at 9250 rpm, 131.4 Nm (97 lb-ft)’s worth of torque and a 0 to 62 mph speed of around the 3.2 second margin. The Ducati Monster 1200 R top speed, so they say, tops out at over 155 mph too. With performance like that, this iconic Monster is a proper super sport machine. Again, according to Ducati: “[The 1200 R is] unmistakably Monster, aggressively racing. The Monster 1200 R makes an immediate impact with its sporty, compact and lightweight lines.” It can fit the bill on the track, or work it’s comfortable magic on your daily commute through the city. 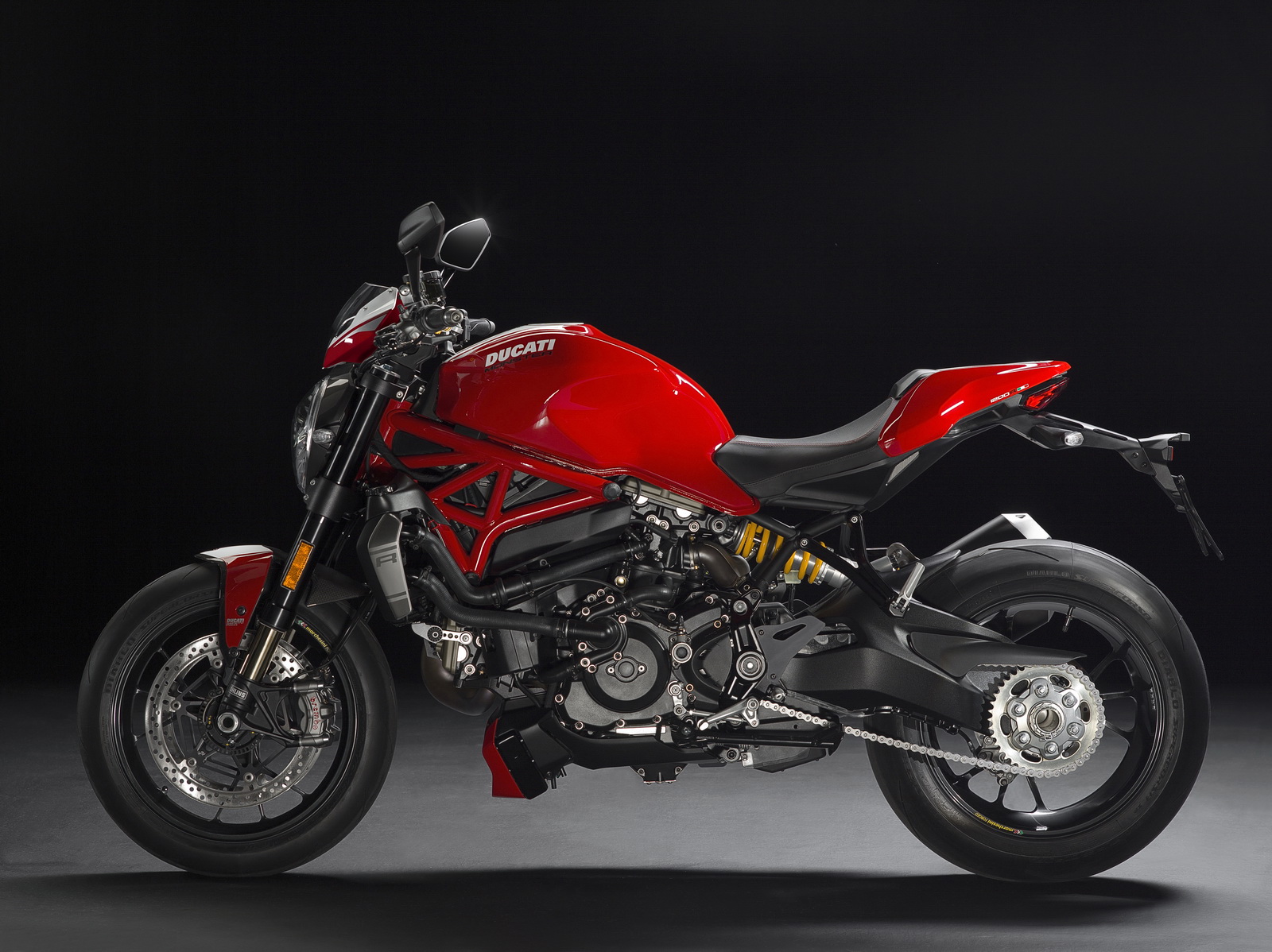 Aside from it’s racing aesthetic, the Monster 1200 R also comes equipped with some serious tech under the proverbial hood. The Monster has been treated with updated suspension, with the latest fully adjustable Ohlins units at the front and an adjustable Ohlins mono at the back complete with (you guessed it) an Ohlins steering damper too. The Monster also wears forged wheels shod with Pirelli Diablo Supercorsa SP at the front and rear, and now that the Monster sits with a higher stance, you can get a bit more lean out of those rubbers too. The bike also wears carbon fiber components to help reduce the overall weight; it now has a dry weight of 180 kg (397 lbs). 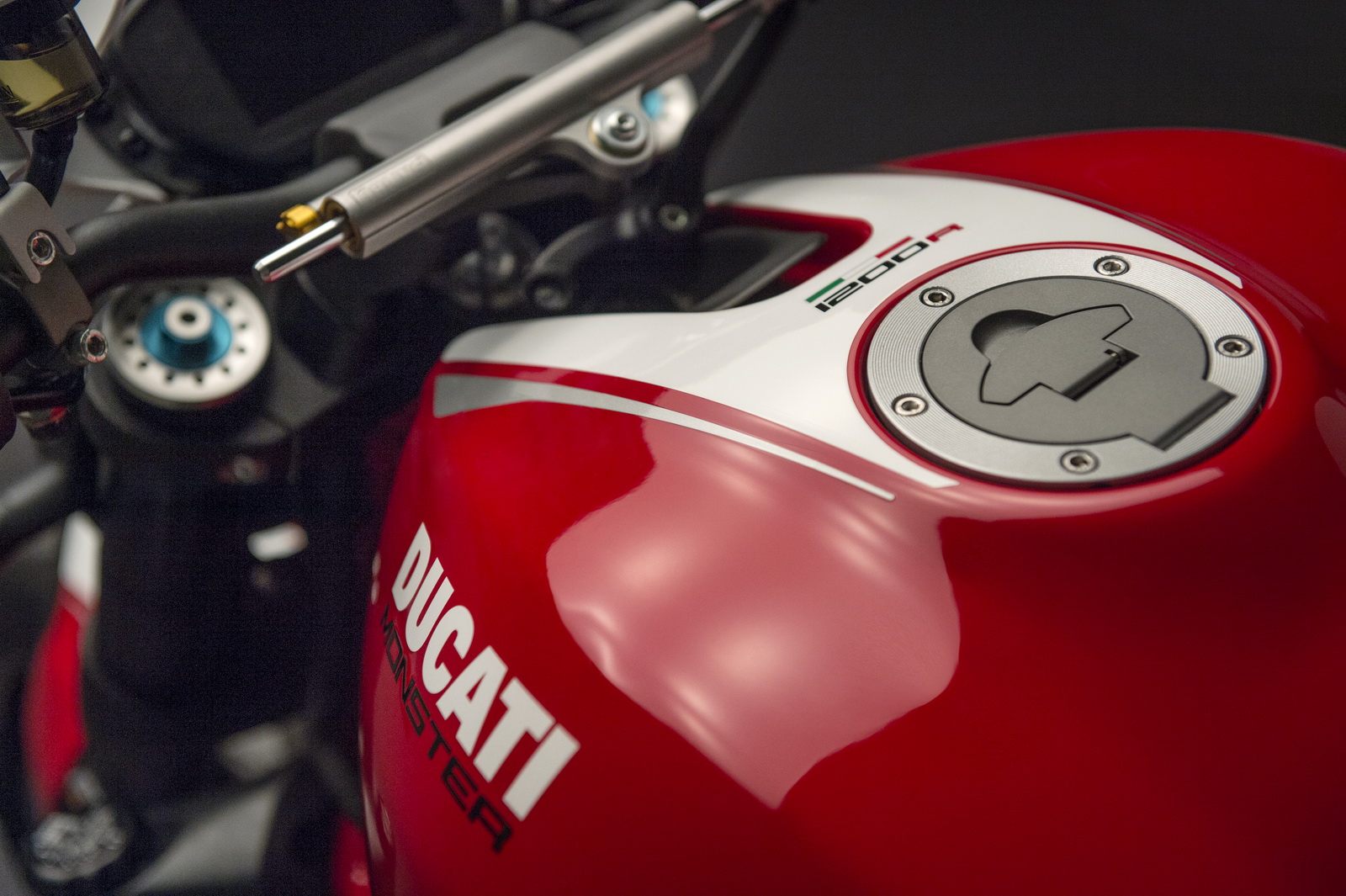 Of course, the Ducati also comes with traction control and three distinct riding modes and a top of the line Bosch ABS system, which works hand in hand with the bike’s Brembo braking package. 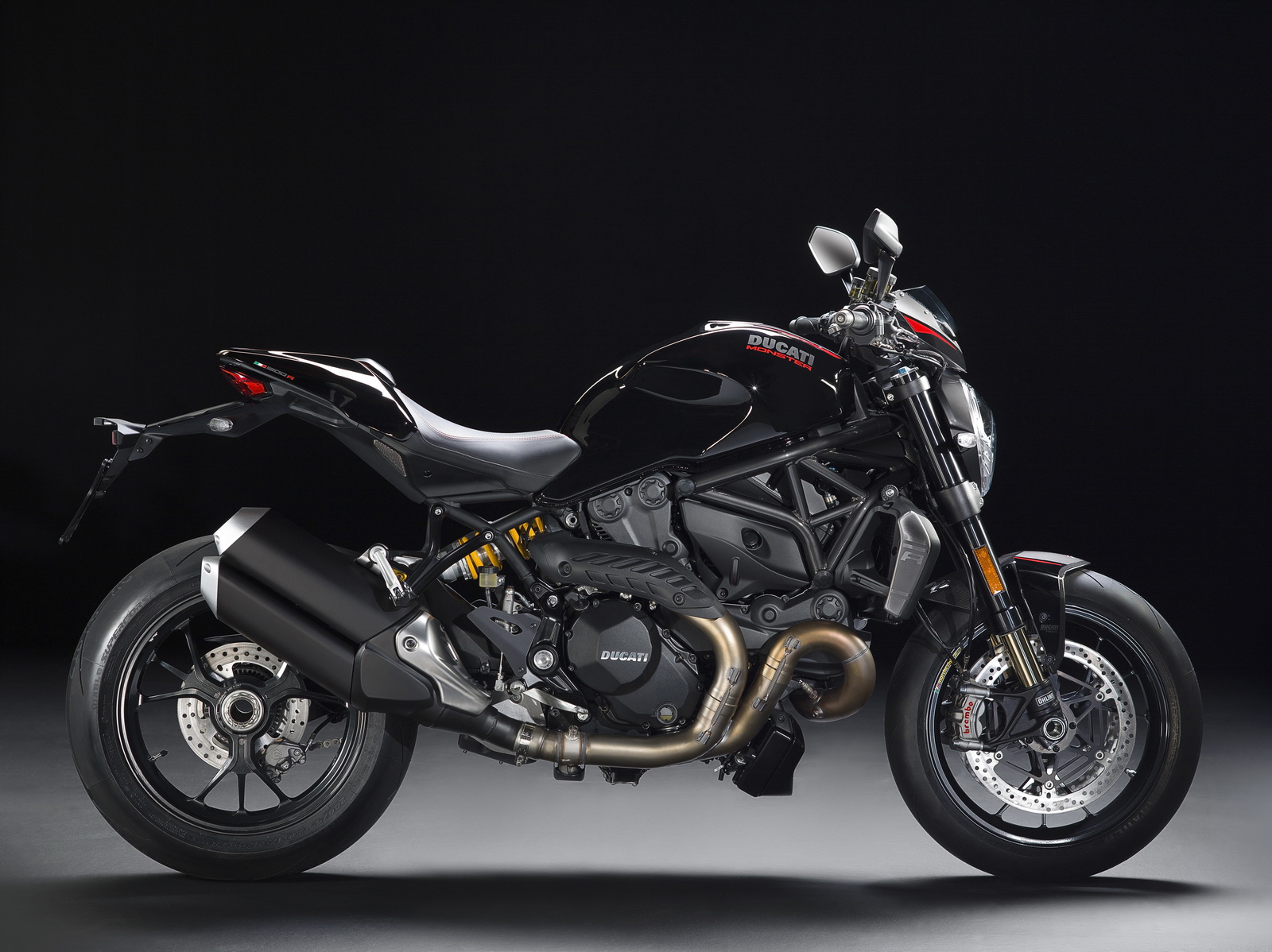 The Monster 1200 R comes in classic Ducati red but you can also opt for what Ducati are calling “Thrilling” black (with a capital “T”) if you want to set your Ducati out from the crowd. 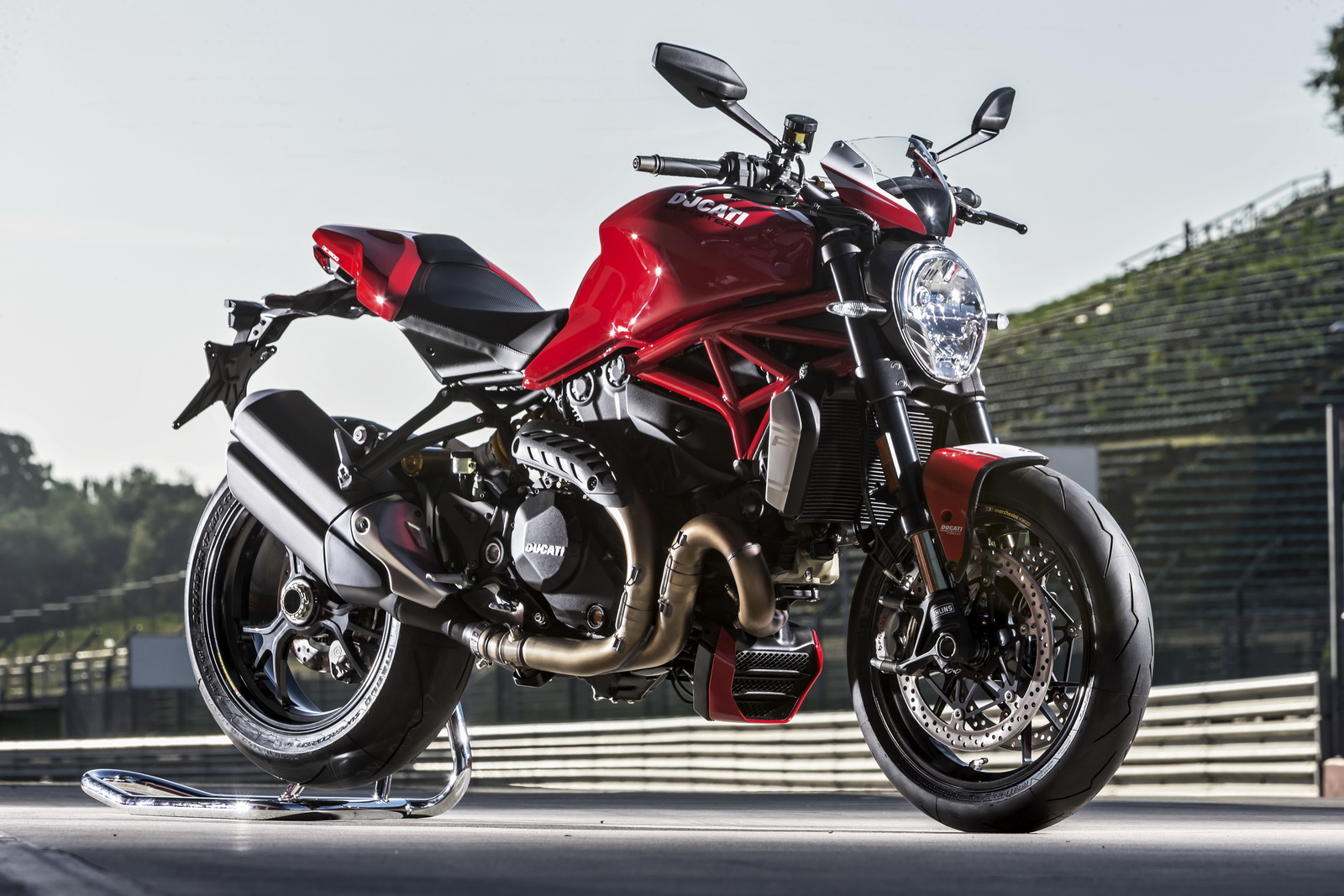 And The Rest Of The New Ducati Monster Family?

The 1200, 1200 S & 1200 R are here, but what are the details? Ducati boss Claudio Domenicali insisted that the whole new range of Monster 1200s were more or less brand new machines; while a lot of work has certainly gone into them, “new” might be a bit of a stretch, though. 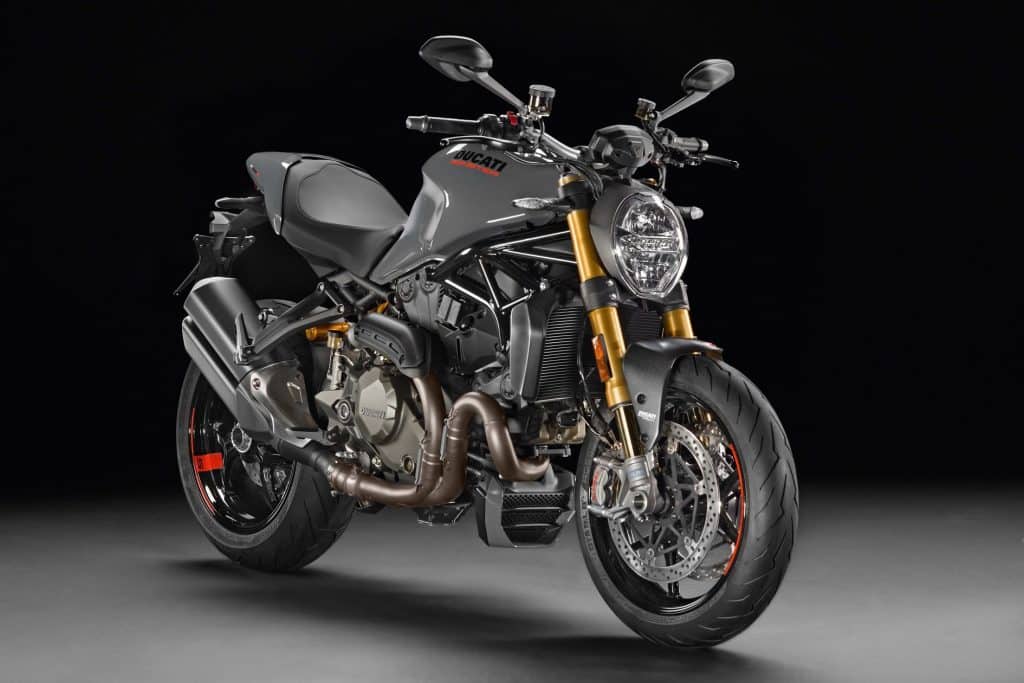 The new range of Monster 1200s come in three distinct versions: the base Monster 1200, the very cool Monster 1200 S, and the range topping Monster 1200 R. All three have seen some nice changes, including revised engines, slimmer tanks, redesigned tails, and most importantly, an all-new electronics package that takes direct inspiration from the 1299 Panigale. 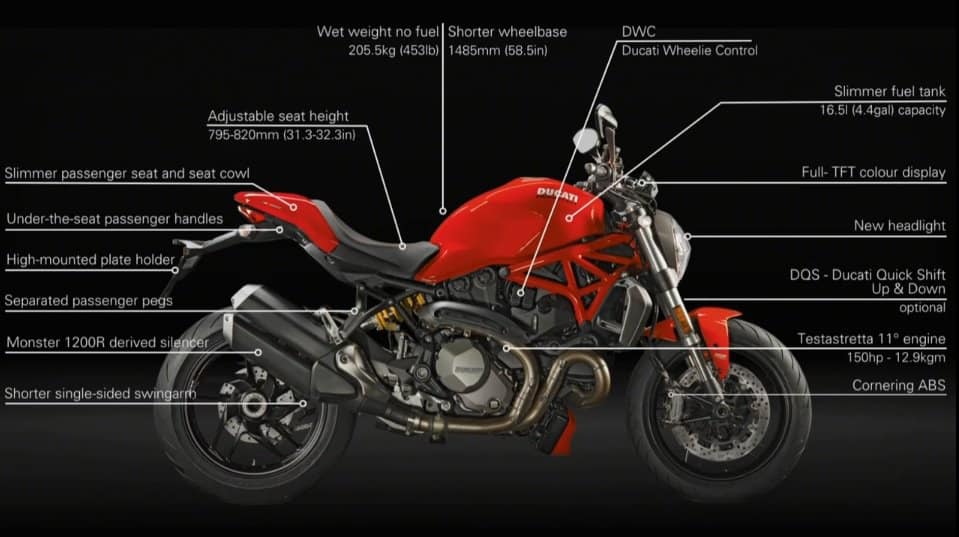 Despite the engine having to have a significant re-jig thanks to Euro4 rules and regulations, the Monster 1200 and 1200 S versions have actually had a nice power increase. Their Testastretta 11 DS engines displace 1,198cc but now produce 150 hp at 9,250 rpm (up 15 hp from the last year’s standard, and 5 hp more for the S version) and now boast 126.2 Nm torque at the 7,750 rpm marker. The Testastretta unit has also been treated with all new throttle bodies, and a twin exhaust arrangement. 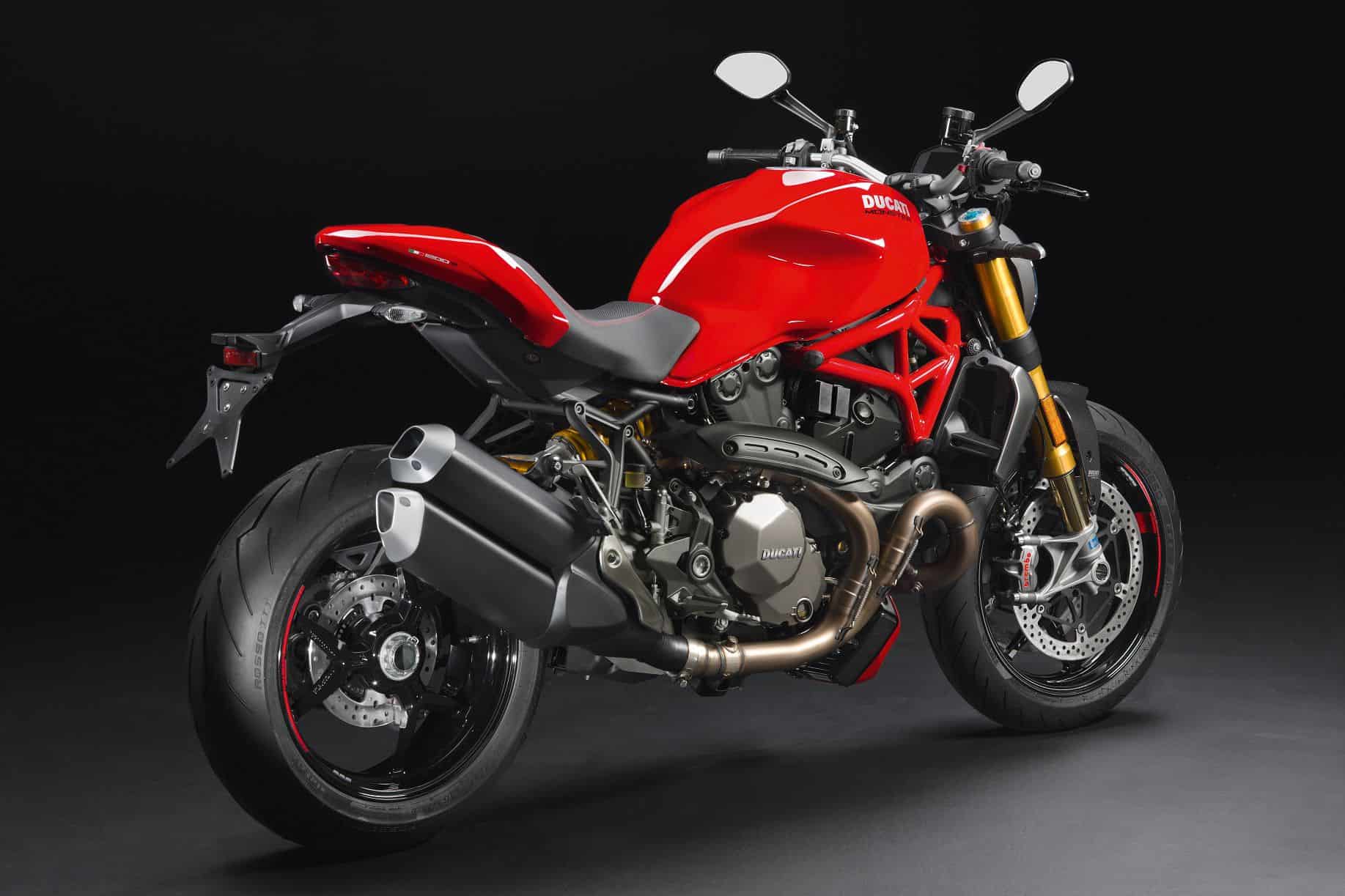 The body has been updated and now has a wide range of new features, including a new headlight assembly, a new license plate holder, a revised tail, and neat under seat passenger handles too. Visually, there aren’t too many differences between the standard model and the “S” version, save for the suspension and color options. The standard model comes with Kayaba forks and a Sachs spring at the rear, while the S version comes with Ohlins suspension front and back. Both have the newly designed and more muscular single sided swing arm, which is a real nice touch. 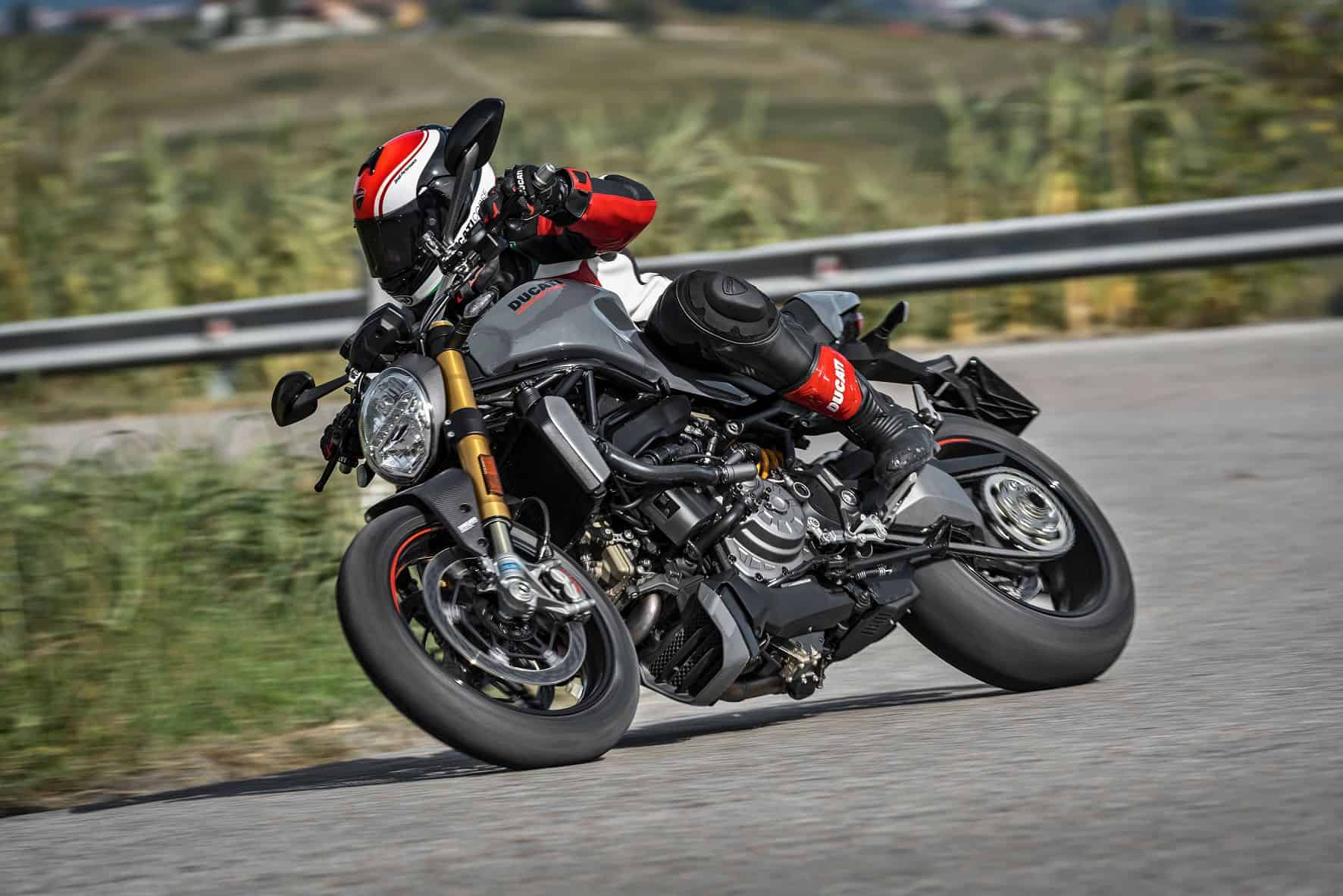 Both models have also been updated to accommodate an onboard IMU that measures all the necessaries for improved traction control, wheelie control and cornering ABS. Despite their similarities, only the 1200 S comes with a quickshifter (up and down) as standard. The base model can accommodate one, but it’s only offered as an optional upgrade. 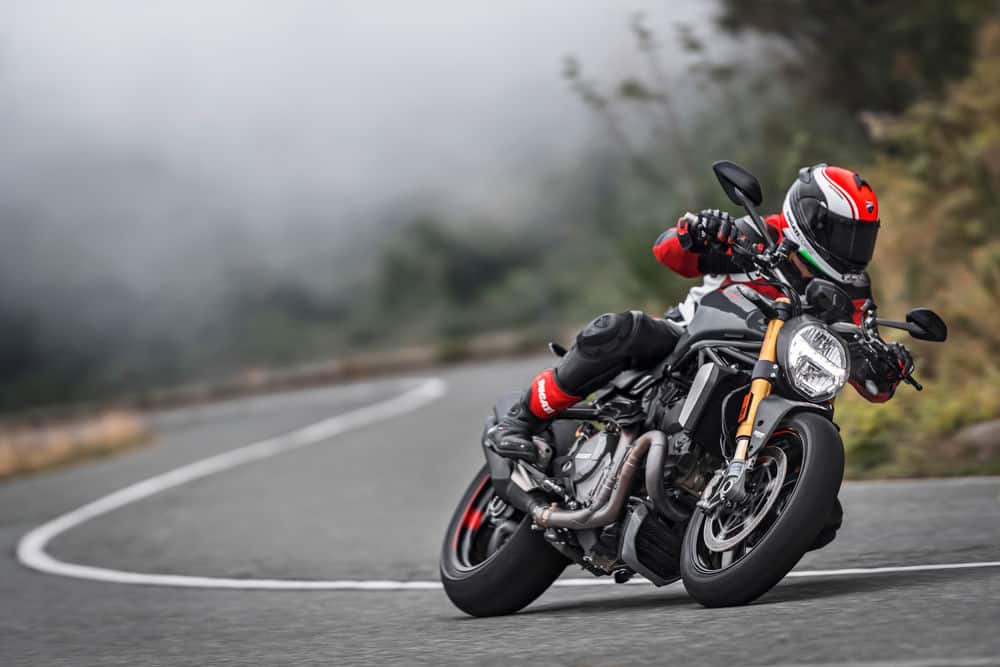 The base Ducati Monster will only come in Ducati Red, but the Ducati Monster 1200 S is offered in the usual red configuration, or the awesome and intimidating Liquid Concrete Grey. We like the grey best. It’s unorthodox for a Ducati, but it really works. 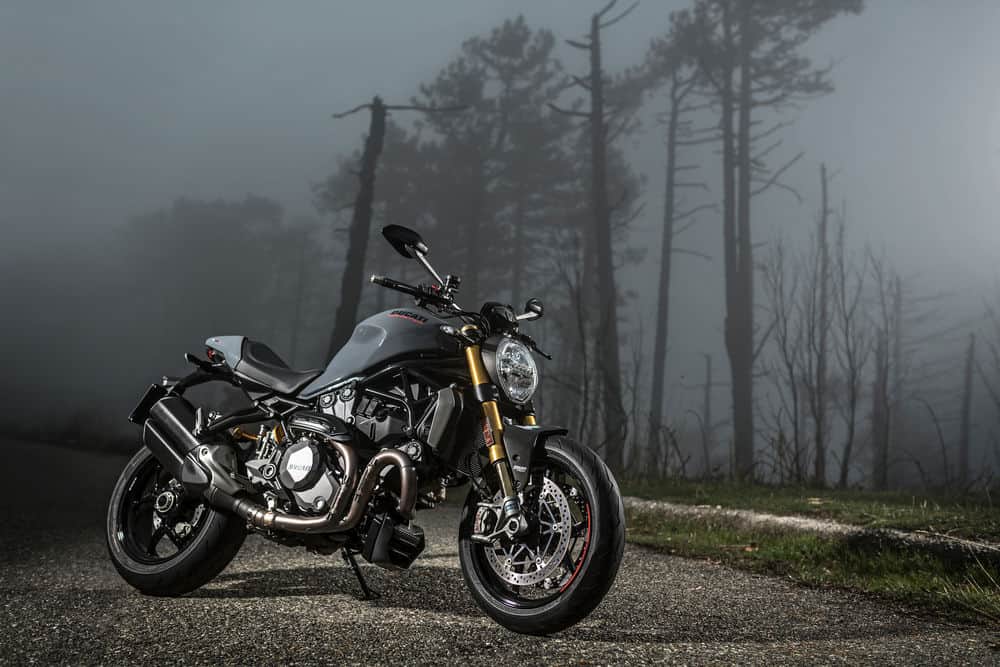 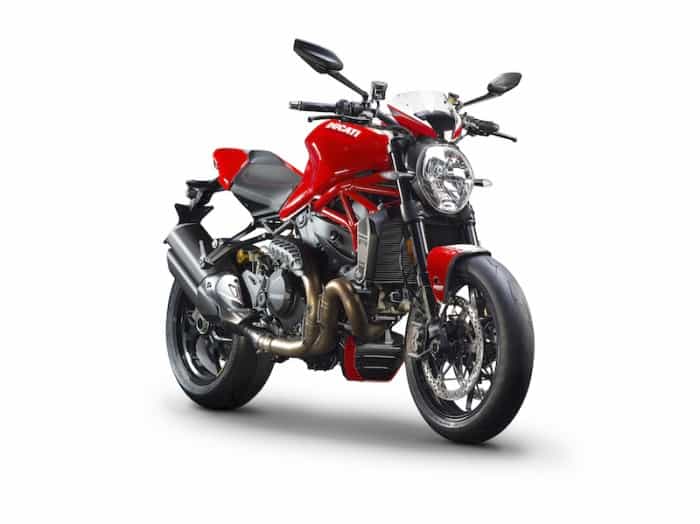 There aren’t too many naked roadsters that you’d be able get the full “elbow” down on, but we reckon the new Monster 1200 R could handle the job. And here’s a picture as proof… Anyway, the new flagship Monster has a different version of the Testastretta engine, and that very engine is capable of an output of 160 hp at the 9,259 rpm margin, and pushes out 131 Nm of torque at 7,750 rpm. It’s not as much as some of its competitors, but it’s definitely a more comprehensive package than everything else in the segment. 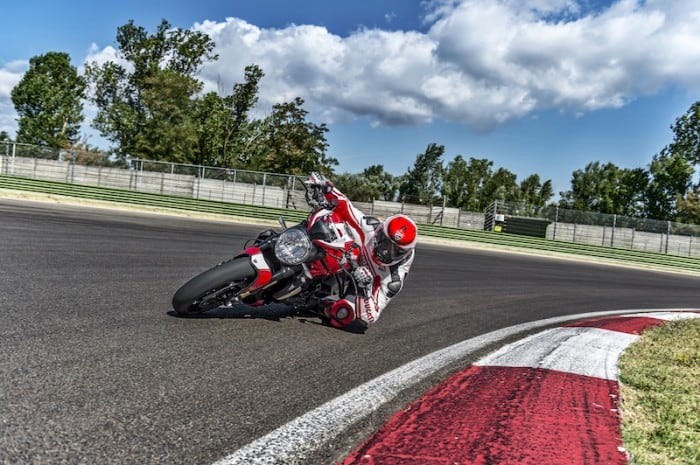 Like the rest of the 1200 range, it comes with a lot of sophisticated onboard technology such as ABS, traction control and the like, but it’s the other goodies that really set it apart from the crowd. Brembo M.50 calipers and 330mm discs give the Monster 1200 R a near superbike spec braking system, and the stopping power is complimented with the impressive suspension suite from Ohlins. Fully adjustable 48 mm forks sit in pride of place at the front, while a single Ohlins shock handles the rear suspension duties. Oh yeah, throw an Ohlins steering damper into the mix too. Forged wheels and Pirelli SuperCorsa tires are also thrown in for good measure. 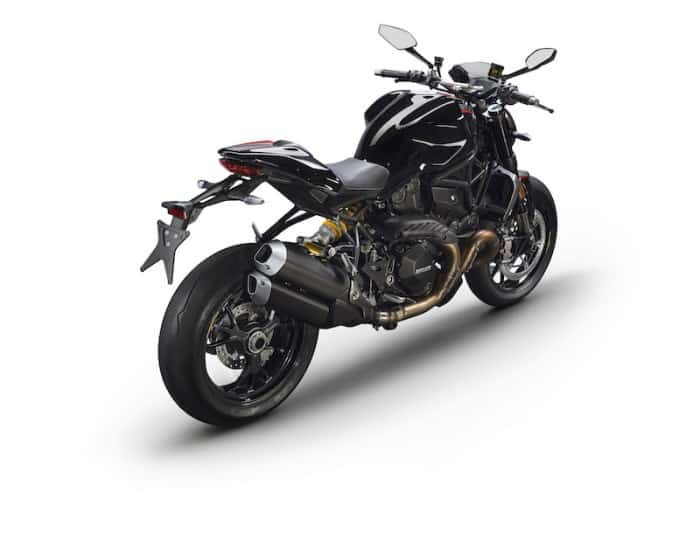 The Ducati Monster 1200 R will be available in traditional Ducati Red or the more intimidating Thrilling Black. But with specs this good, who cares about the color options?


Ranking The Top 10 Modern Parallel Twin Motorcycles
Which Motorcycles Survive The Longest? What Brand Do You Thi...
Motorcycles Are Great on Gas, But Are They Bad For The Plane...
Introducing The Goldwing Killer: The Yamaha Star Venture!
The Lamborghini Motorcycle Design
Suzuki GSX 1340 R Hayabusa – What A Monster