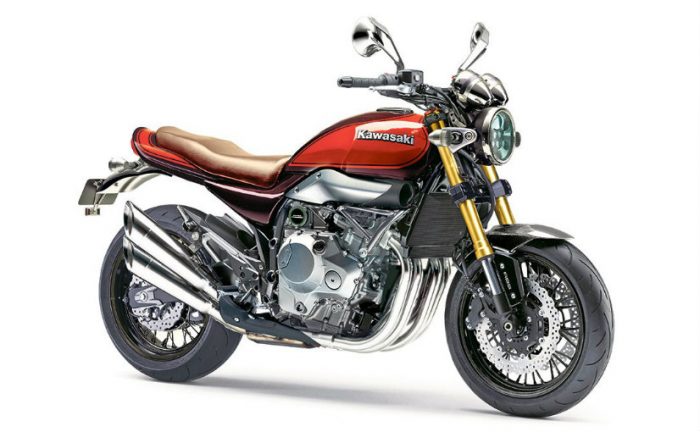 Multiple Japanese sources have hinted that Kawasaki will be introducing the Z900RS…with a supercharged 900cc engine. As they’re currently leading the supercharging game, and have yet to make any significant steps into the retro-modern territory, a forced induction and vintage styled machine may be a sensible idea. Maybe…

As fans of the older Kawasaki “Z” series machines, we’re pretty excited – but at the moment, all of this is pure conjecture and fodder for the rumor mill. However, Kawasaki have dropped a few clues and a few sources have made some interesting comments, but then again it might all be nonsense.

We did see a few interesting concept images late last year, coming in the form of Kawasaki’s SC-02 Soul Charger and their SC-01 Spirit Charger concepts, so the firm is definitely looking at expanding their supercharged line up. And the SC-02 Soul Charger definitely leaned towards the “retro” end of the styling spectrum…and a lot of people are guessing that the SC-02 will be relabeled as the H1 if it were to go into production.

Next on the rumor check list: Kawasaki also trademarked the Z900RS name recently, so it doesn’t take a genius to work out that some kind of Z900 based machine is on the cards. Yamaha’s “Sports Heritage” range of retro-modern machines really took off, and we’ve seen that Honda has plans to release classically styled machines in the near future, so it makes sense that Kawasaki would also jump on the bandwagon.

Anyway, if the rumors are to be believed, the Z900RS will be a supercharged version of the 900cc inline four engine, with retro styled bodywork – possibly based around the SC-01 Spirit Charger concept. So, what about the other concept? – I appreciate all of this SC and Something Charger is getting confusing and monotonous, but stay with us here – Well, thanks to some detective work, we reckon that it’s going to be the new H1, sporting a three cylinder, 675cc engine complete with a supercharger too. Or it could be nothing. We do know that Kawasaki are planning on releasing at least 11 new models over the next two years, and maybe one of them will be the supercharged Z900RS.

Either way, it does seem like Kawasaki are definitely pushing their Balanced Supercharger Engine technology into every available model. It’s a shame for all of those riders who invested their cash into the “limited edition” and highly collectible H2s and H2Rs…which we now know were not from a limited production line, and now that more supercharged bikes are making their way onto the market, they’re not highly collectible, either.

So what’s this supercharged business? 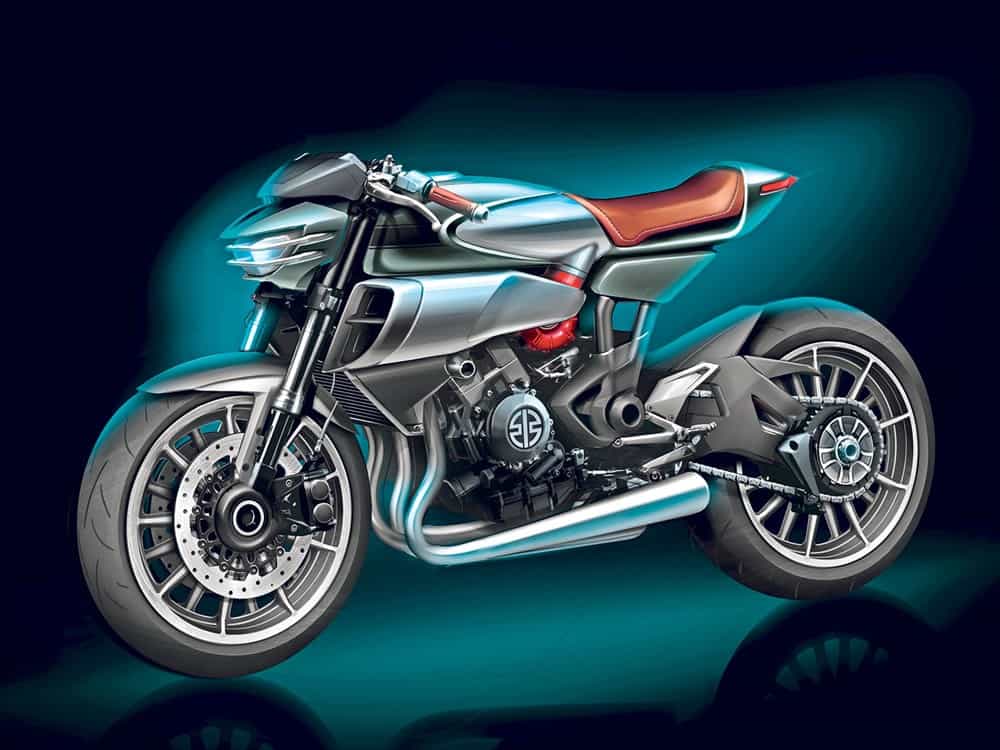 Kawasaki are planning on releasing the Z900RS as a direct competitor to the increasing amount of modern retro bikes arriving on the scene; this may not be their only weapon, but it promises to be a good one. Last year, we saw supercharged concept drawings in the form of the SC-01 Spirit Charger and SC-02 Soul Charger, with Kawasaki promising up to 12 new models to be released before 2018, and it’s no secret that the “SC” part of the name stands for “Super Charged.” According to our sources, the supercharged version of this stunning retro modern Z900 will be coming in the near future.

Kawasaki have put a lot of emphasis on their supercharged technology of late, and it’s a move that seems to have paid off. Other manufacturers are way behind in that department, and Kawasaki has very much become the industry leader. While everyone else is struggling to produce one supercharged model, Kawasaki is already designing and their next range of forced induction machines… 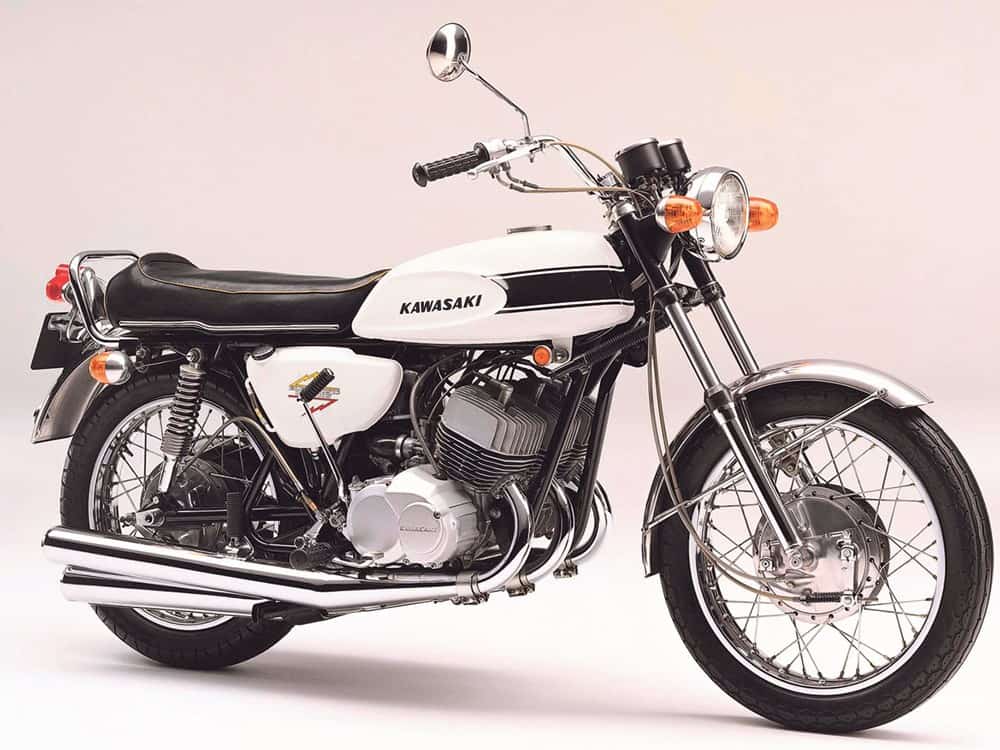 What we’re expecting to see in the next few weeks is the Z900RS, which comes with a brand new and liquid-cooled inline four cylinder engine, with awesome nods to the Z1 of old, including the old school cooling fins. If you want a motorcycle with that classic 1970s look but kitted out with modern technology, then this could very well be the bike for you. However, if you’re looking for something a little more feisty, we’re also expecting to see a supercharged number appearing alongside the Z900RS at EICMA. This other model – which we’re expecting to be dubbed the “H1” – will be a 675cc three cylinder machine, complete with the retro looks…and a supercharger. But we’ll have to wait until November for news about that!

After a rather hurried reveal at Cologne’s INTERMOT show, Kawasaki have now officially pulled the covers of their new breed of streetfighters at Milan’s EICMA festival: introducing the 2017 Z650 and the Z900. Thanks to the latest batch of rules and regulations from Europe, it’s time for us to say goodbye to the ER-6n and the mighty Z800. But after a quick look at their replacements, we’re happy to welcome these feisty new alternatives. Middle-weight nakeds have never looked so good…But which one do we prefer? Let’s look at the Kawasaki Z650 Vs Z900! 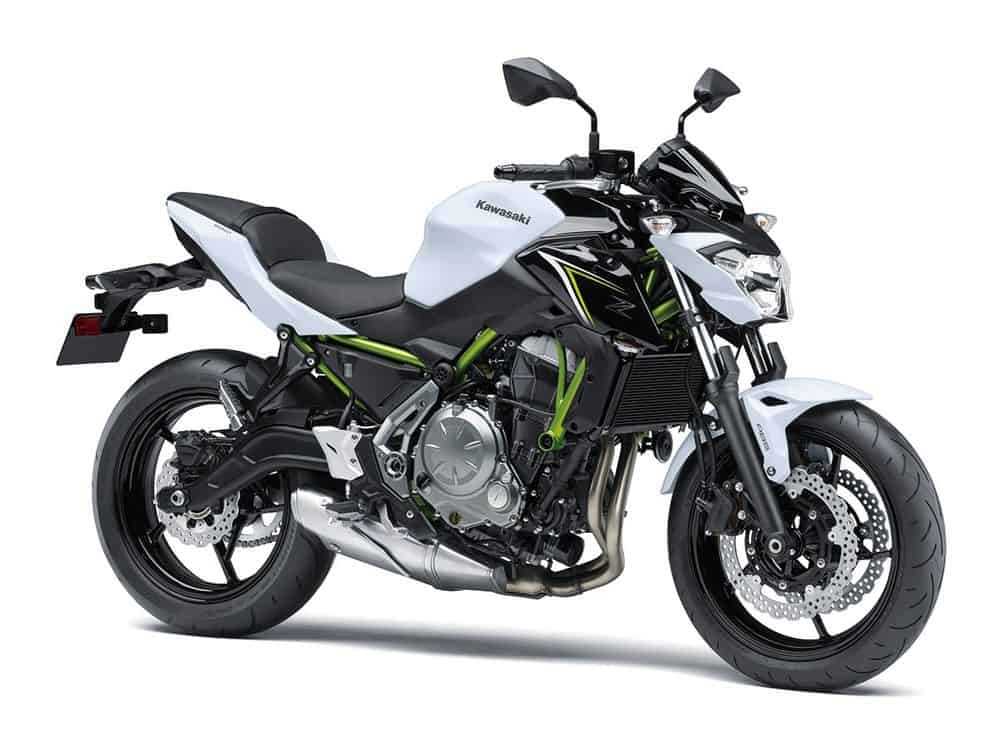 As in all things, it’s best to start small, so we’ll kick off with the all-new 2017 Kawasaki Z650. Name-wise, the Z650 is a bit of a blast from the past, but physically, it’s nothing like its classic predecessors. In fact, the 2017 Z650 is more like a naked Kawasaki Ninja 650, and that is no bad thing. Kawasaki have boasted that this new platform will be nimble on the roads, carry improved handling and should appeal to a wider audience than ever before. 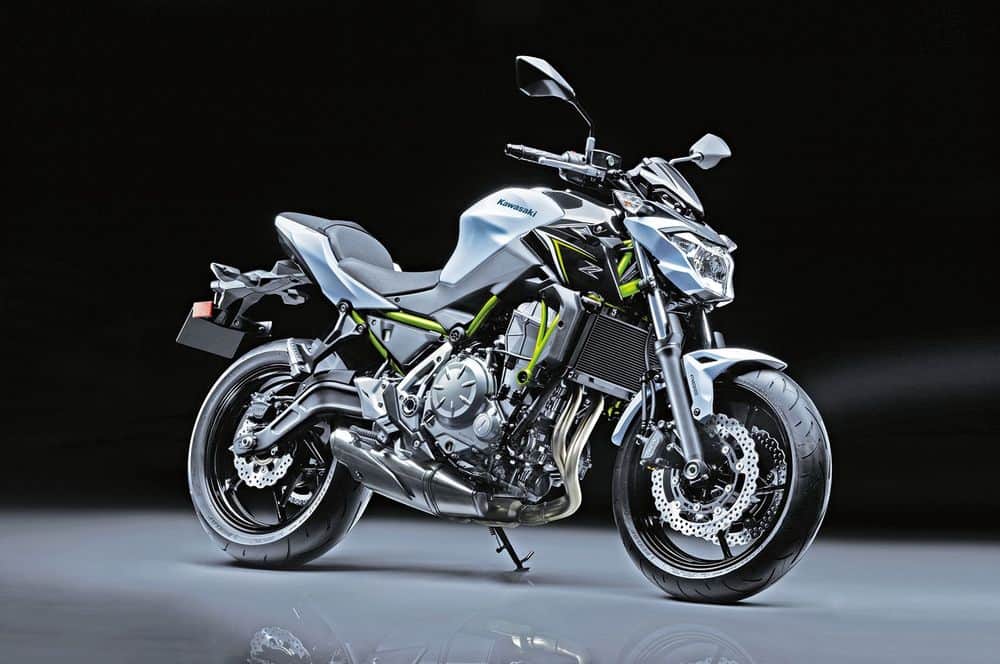 Weighing in at a mere 185 kg (407 lbs) and equipped with an accessible seat height of 790mm, the new Z650 has been aimed at a very broad target market. Couple the easy ergonomics with the modest 649cc twin-cylinder engine and you’ve got a very versatile platform on your hands. The output is rated at 68 hp, which is a little less than the ER-6 used to push out, but the ER-6 was a much heavier bike. So it’s all relative…

Other boons on the new Z650 include: the Kawasaki Assist & Slipper clutch, a repositioned rear shock for a more balanced chassis, and optional extras including 14 liter panniers, and a 30 liter top box… 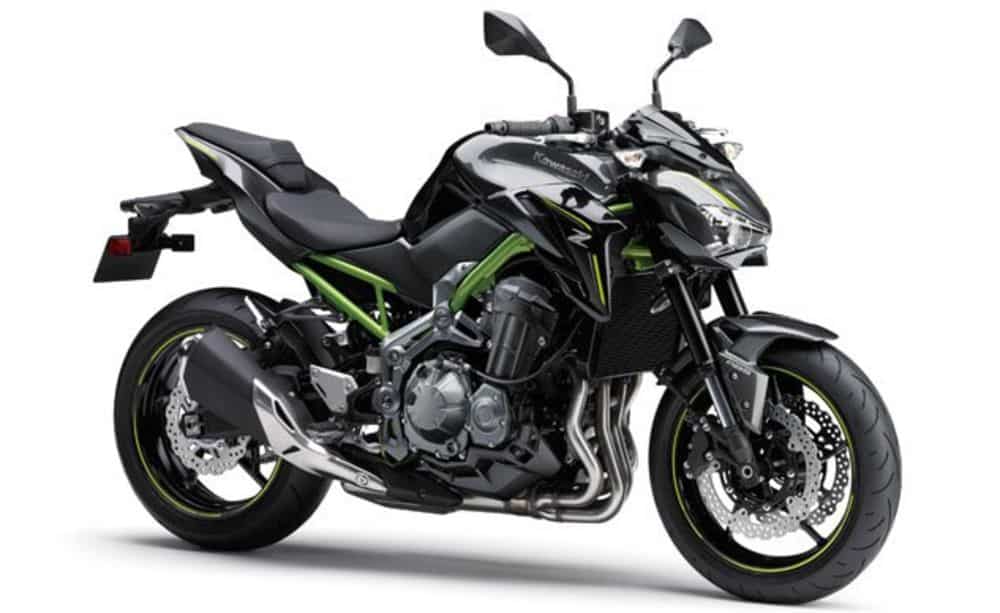 While the Z650 is rather impressive, it’s got nothing on the all-new Z900. This aggressive looking streetfighter is the direct descendant from Kawasaki’s late Z800. The body is angular and intimidating, the new Trellis frame ticks all the right boxes, and the engine is something rather special. The Z900 borrows the engine from the Z1000, rather than being a tarted up version of the Z800. The superb inline four 948cc engine produces a very respectable 126 hp, which is around 12 more than the Z800 used to. It weighs a little more than we expected, weighing 210.5 kg (464 lbs) – but the added weight is a small price to pay for the unprecedented power increase. 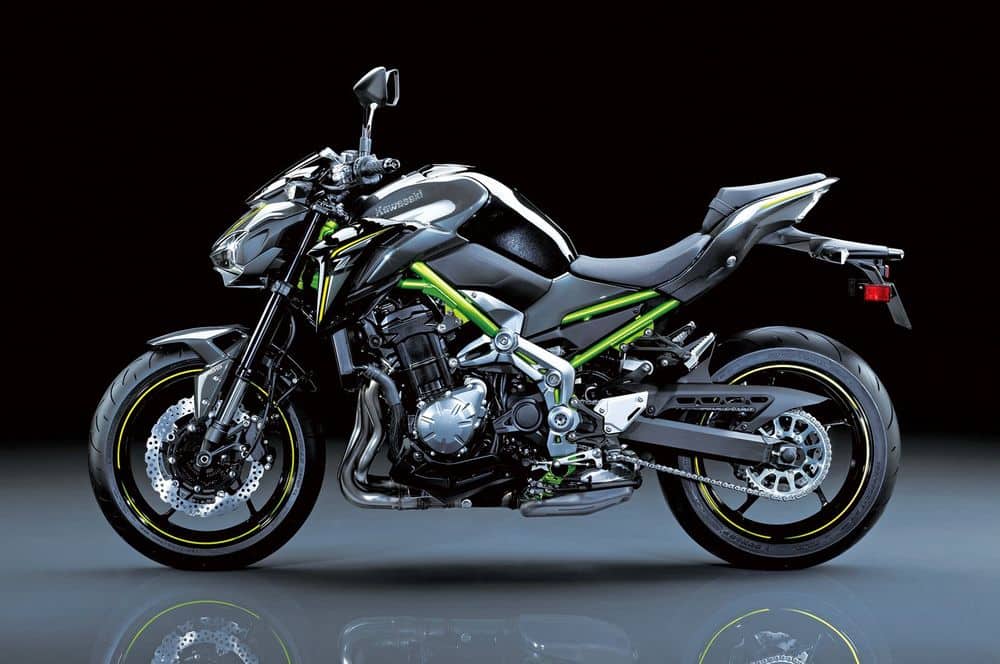 The Z900 comes equipped with USD-style 41mm forks, with stepless rebound damping, and adjustable preload, and a rear monoshock with adjustable preload too. Braking duties are handled by 300mm front discs and Nissin four pistoned brake calipers. The Z900 also boasts the Kawasaki Assist & Slipper clutch, a 525 chain to reduce drive issues, and ABS as standard.

While both models aren’t exactly the most show stopping bikes for the 2017 range, they definitely serve their purpose, and will serve their customers very well. Who has ever complained about the quality of Kawasaki’s more vanilla models? No one. That’s who.