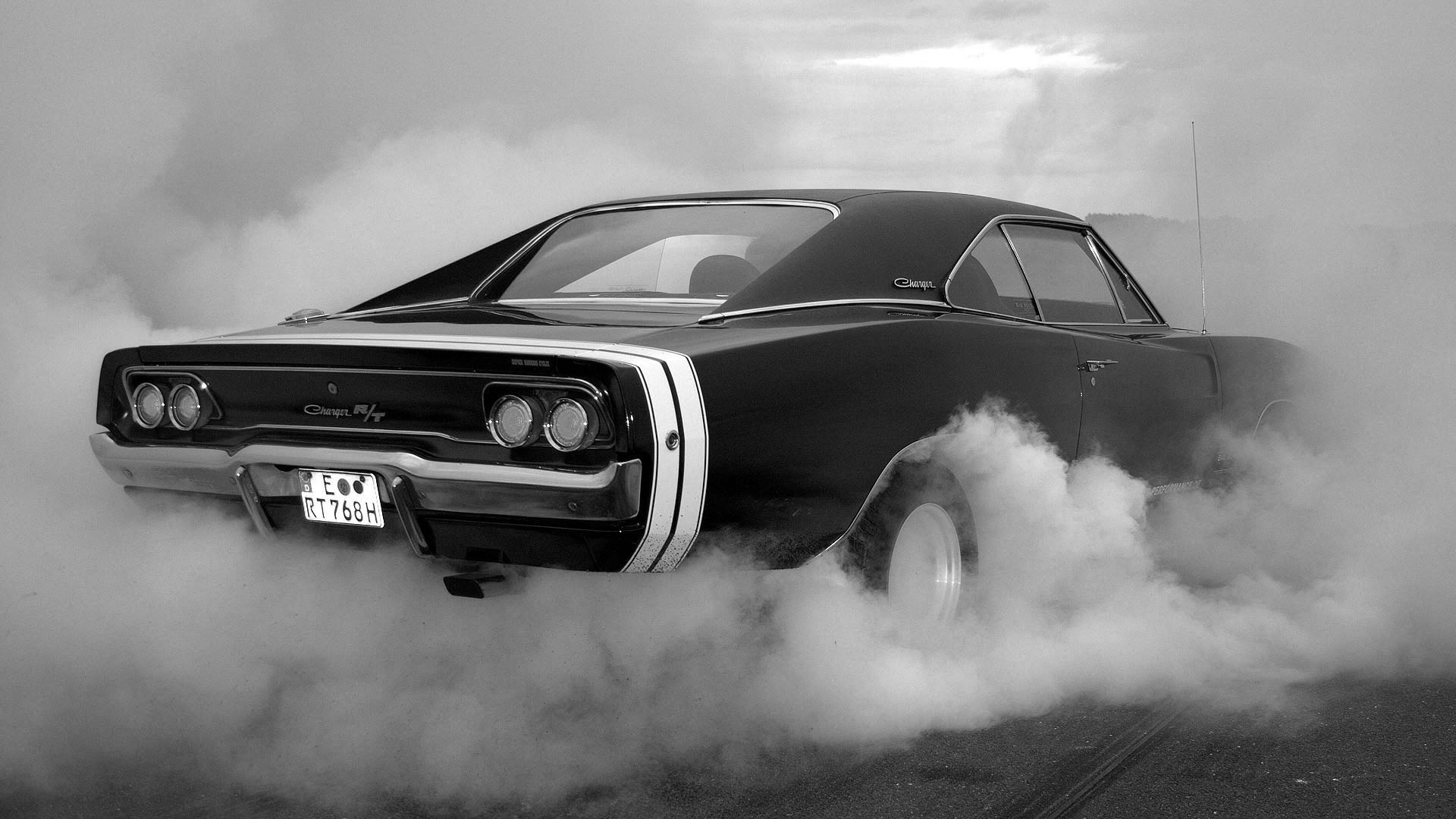 So, you have a budget of 30K and want a fast car. Given that the average new car price in North America can top 40 grand in a heartbeat, finding the fastest cars under 30K may require a nod to the used car market. Luckily, at 30K, you do not have to buy a very old car. Depreciation hits many fast cars hard over the first three years of their lives.

Since 30K is quite a substantial budget, we are going to limit our list to cars that are no more than 5 model years old…just to keep the thing manageable. We are also going to limit ourselves to models that are actually available in North America. After all, why add Euro-spec material if you can not buy it?

The classic Ford Mustang has been reinvented a half dozen times since its inception in 1965. In some iterations it has been a basic fun-to-drive car, in others it has been a pure muscle car that could pull enough Gs to push you through your seat.

At our current price point, you can get a great used Mustang GT Premium with a 5.0L V8 capable of 435 ponies and 400 lb-ft of torque. That gives you a chance at a top speed of 155 mph and a 0-60 time of just 6.5 seconds. The Premium package offers you enough of the tech and creature comforts you want to make this a great family option. It just happens to be a bonus that it is one of the few cars on our list of the fastest cars under 30K that seats more than two. 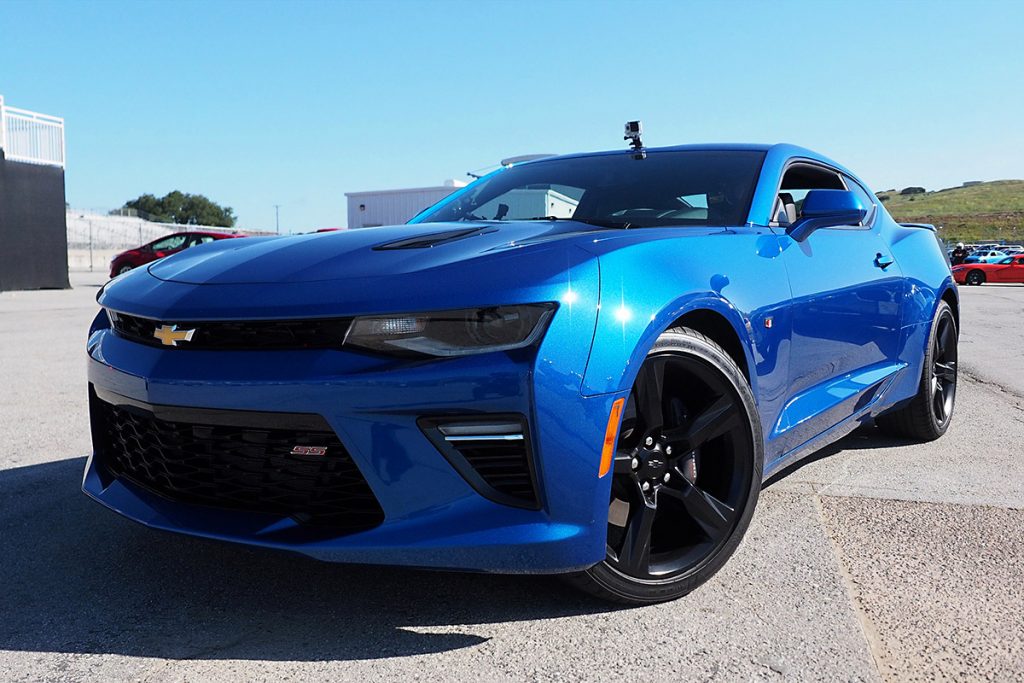 The base Camaro LT offers a nice V6 with 335 hp and 284 lb-ft of torque. It also fits nicely under our budget, but to make our list of fastest cars under 30K more interesting, we decided to step up to the Camaro SS.

A Camaro SS is equipped with a 6.2L V8 based on the engine used in the Corvette. The powerplant is capable of 455 hp and 455 lb-ft of torque. Output numbers like that give you a 0-60 time of 3.9 seconds (when equipped with an automatic gearbox) and a top speed of 165 mph. 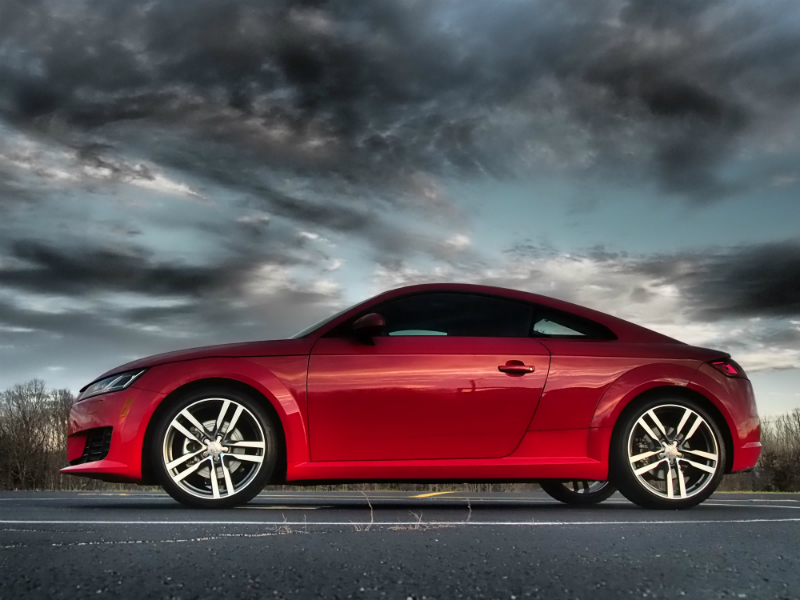 Audi builds several great cars. The A4, A6, and A8 are outstanding options for other lists, but the Audi TT Quattro is the offering from the automaker that best fits onto our list of the fastest cars under 30K.

Powered by a turbocharged 2.0L four popper, the TT Quattro is capable of 220 hp and 258 lb-ft of torque. The TT Quattro is able to move from a stand still to 60 mph in approximately 5.3 seconds and has a top speed of 135 mph. Pair those output numbers with Audi’s outstanding Quattro AWD system and you have a true driving enthusiast’s car! 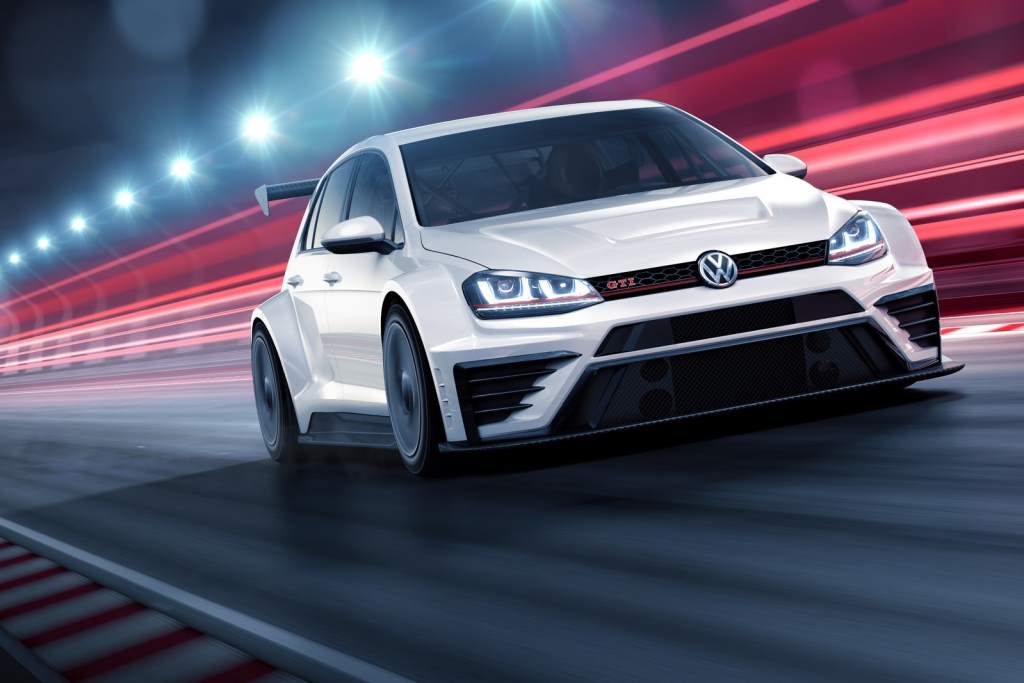 The Volkswagen Golf GTI makes just about every list of hothatches on the internet, so you know it is fast. What you may not know is that it is a very affordable car. You can buy the most recent model year for our price point; arguably making this the most affordable option on our list of the fastest cars under 30K.

A Volkswagen Golf GTI Sports Hatchback is equipped with a superb 2.0L turbocharged four with an output of that matches that of the Audi TT. The powerplant is capable of 220 hp and 258 lb-ft of torque. Output jumps to 247 hp if the car is equipped with the Performance package. The GTI Sports Hatchback is able to get from 0-60 in less than 6 seconds and has a top speed of 138 mph with the Performance package. 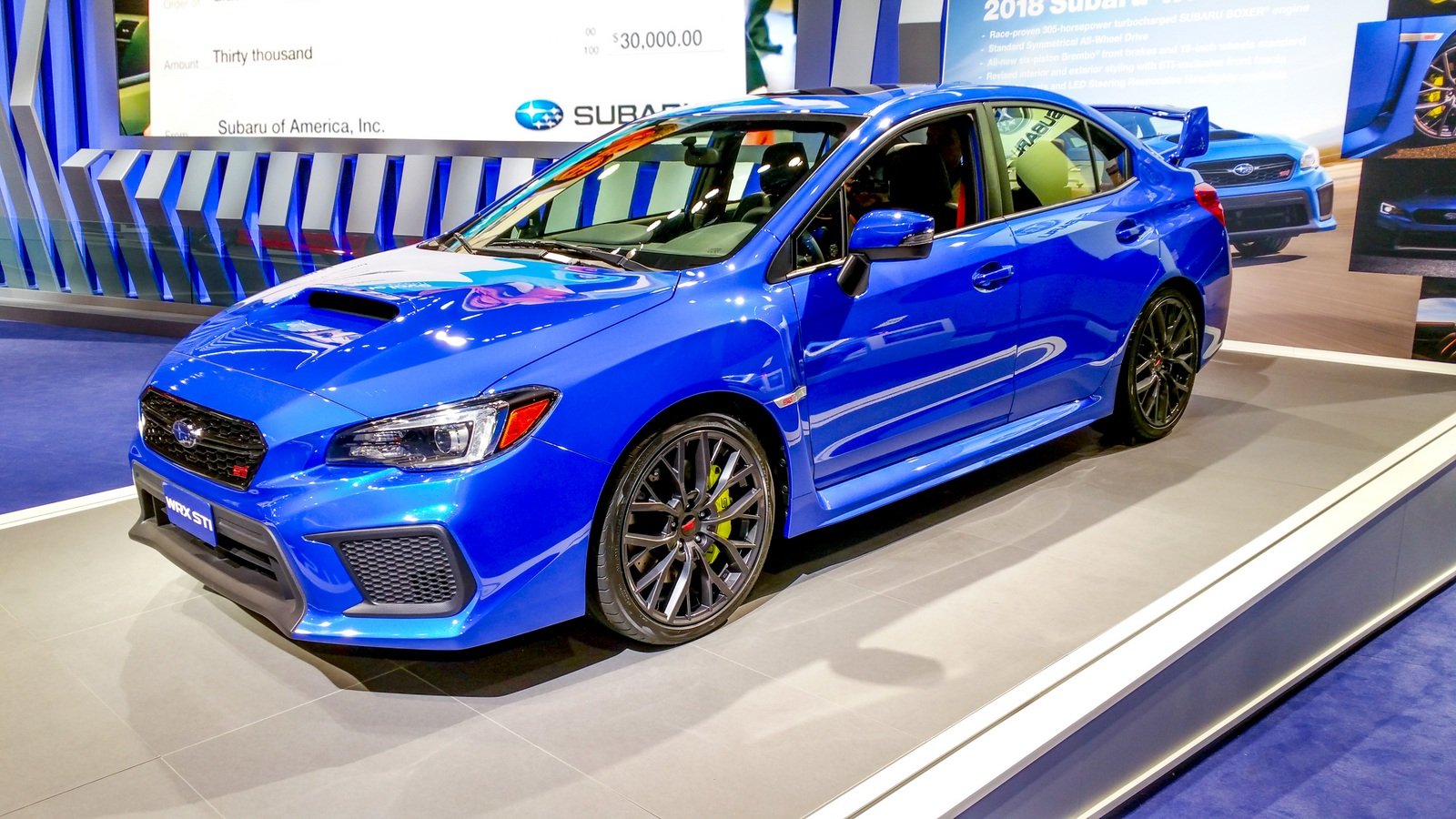 Subaru is not a name that one associates with performance in many models other than the Impreza WRX. The automaker generally evokes visions of blandness in its other model. The most powerful option in the WRX lineup is the STI, so let’s have a look at it.

You have to go back a few model years to find a WRX STI that fits onto a list of the fastest cars under 30K, because these cars hold their value quite well. Luckily, you should meet the price point with a car that is no more than three model years old. What you get with a used WRX STI is a 2.5L turbocharged four banger that tosses 305 hp and 290 lb-ft of torque onto the pavement. Pair that output with a durable and easy to shift six-speed manual and you have your hands full of fun. These cars are exhilarating to drive straight from the factory, but the aftermarket for the WRX is massive. Large enough in fact to deserve its own internet. With the right combination of parts, you can easily double the output of a WRX STI. 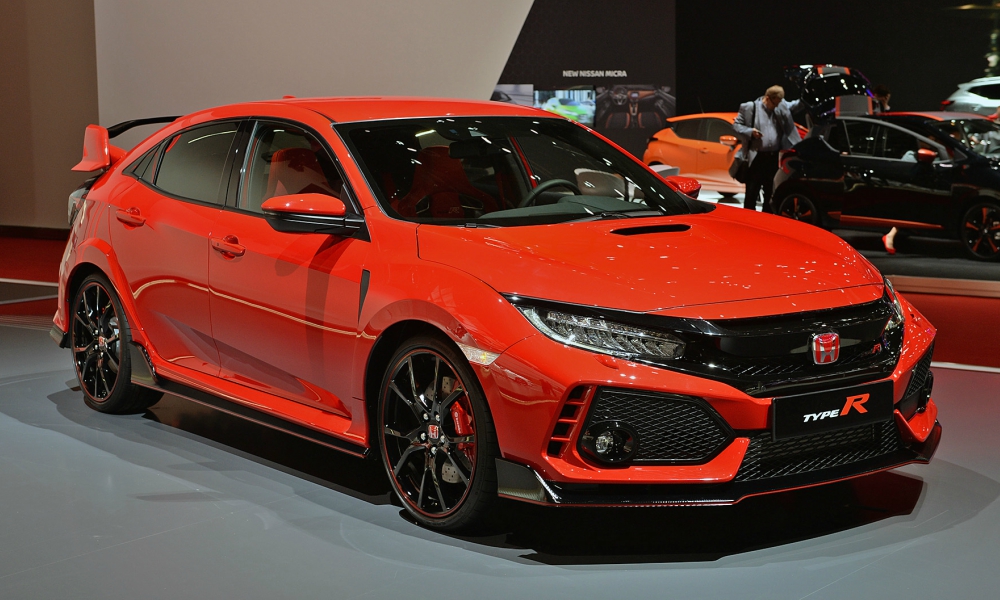 The Honda Civic Type R is well known to fans of the hothatch. Where the Honda Civic generally evokes thoughts of responsible driving and fuel economy, the Type R embodies power and endorphin-charged driving.

The Honda Civic Type R packs a 2.0L turbocharged four-cylinder under its hood. The powerplant thrusts 306 hp and 295 lb-ft of torque to the pavement through a six-speed manual transmission. The Type R is able to jump from 0-60 mph in just 4.9 seconds and will hit 100 mph in an a scant 11.5 seconds. In addition to its quickness, the Type R brings a drag-limited top speed of 170 mph to the table. These are numbers you expect from production sport cars rather than a Honda Civic. 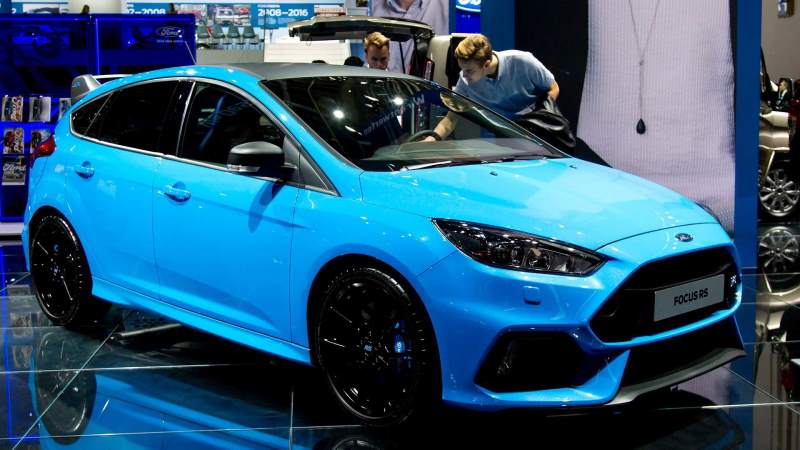 The base Ford Focus is another car that is more apt to make you yawn than it is to excite. That is unless you step up to the Ford Focus RS.

The Ford Focus RS packs one helluva punch with a turbocharged 2.3L four popper that produces an exciting 350 hp and 350 lb-ft of torque. Where the Civic Type R is a front-wheel drive car, the Focus RS is an AWD dynamo. The engine’s output is directed to all four wheels through a six-speed manual gearbox. Thanks in part to an interesting torque-vectoring system, the Focus RS rockets from 0-60 mph in 4.6 seconds and hits 100 mph in a mere 13 ticks. With an electronically-limited top speed of 165 mph, the Ford Focus RS can give many sport cars a run for their money. 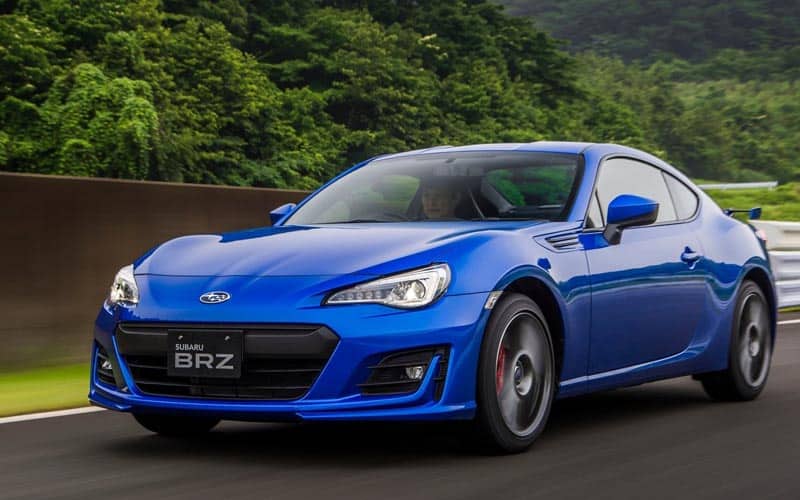 After saying that most Subarus are boring here we are with the automaker’s second entry on our list of the fastest cars under 30K. The Subaru BRZ is not only fast, but is as sharp as they come.

The Subaru BRZ is powered by a 2.0L boxer engine that cranks out 205 hp and 151 lb-ft of torque. That doesn’t sound nearly as impressive as the WRX STI, but the BRZ’s low curb weight allows it to put up numbers like a 0-60 time of 6.7 seconds and a top speed of 145 mph. It also costs about 40 percent less than a WRX STI, so the loss in power is made up for in your wallet. 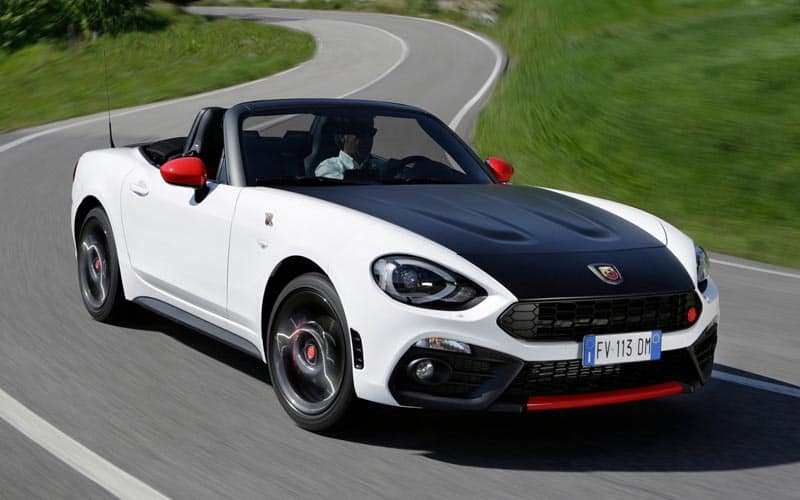 Fiat first introduced the 124 Spider in 1966. The car is most likely the model that many Americans picture when they think of an older Fiat sports car. Production stopped in 1985 after sales slipped to unimaginably low numbers.

As Fiat tries to reenter the North American market, the company has brought the 124 Spider back. The current iteration is powered by a turbocharged 1.4L powerplant that is capable of 164 ponies and 184 lb-ft of torque. With an experienced driver manning the six-speed manual, the Fiat 124 Spider can get from zero to 60 mph in 5.9 seconds. With a top speed of 143 mph, the 124 Spider may not be the quickest entry on our list of the fastest cars under 30K, but it makes a respectable case for itself.

Before passing from the North American market, Toyota’s sub-brand Scion gave us the FR-S. The FR-S is very respectable sports car that is easy on the budget and fun to drive every day.

The Scion FR-S is powered by a direct-injected 2.0L engine that places 200 hp and 151 lb-ft of torque
at a driver’s disposal. With a 0-60 mph time of 7 seconds and a top speed of 136 mph, it can not head our list of fastest cars under 30K. On the other hand, it is the lowest priced option on our list, so it does have the ability to lure budget-conscious sports car buyers. 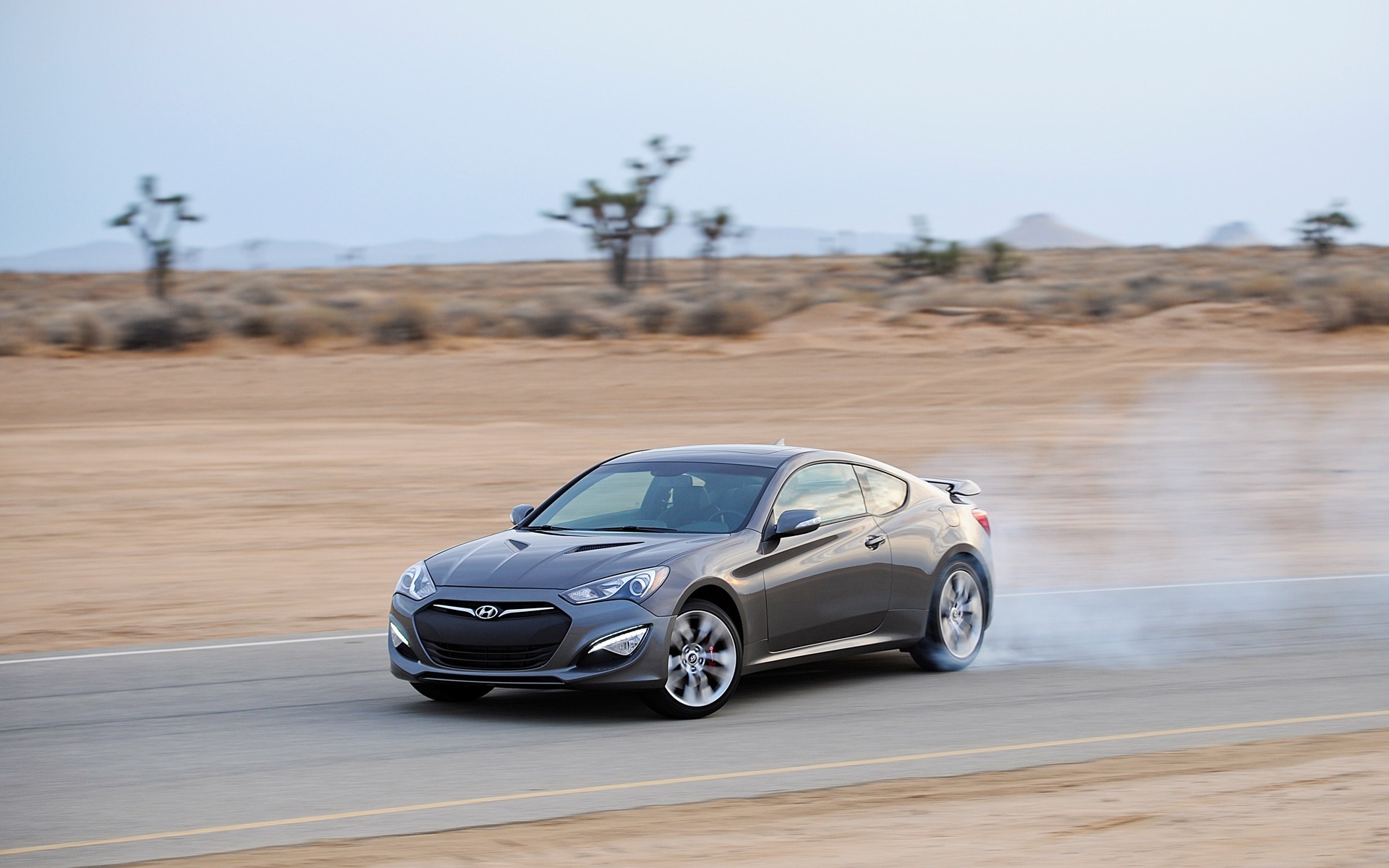 Powered by a vivacious 3.8L V6, the Genesis Coupe 3.8 R-Spec produces 348 hp and 295 lb-ft of torque. Power makes its way to the rear wheels through a hell-bent six-speed manual gearbox. Add in a low curb weight, a 0-60 time of just 5.3 seconds, and a top speed in excess of 150 mph and you will forget all about the standard Brembo brakes, limited slip rear diff, and performance suspension. Well, maybe not the suspension. You’ll appreciate that when you are testing the R-Spec’s limits. 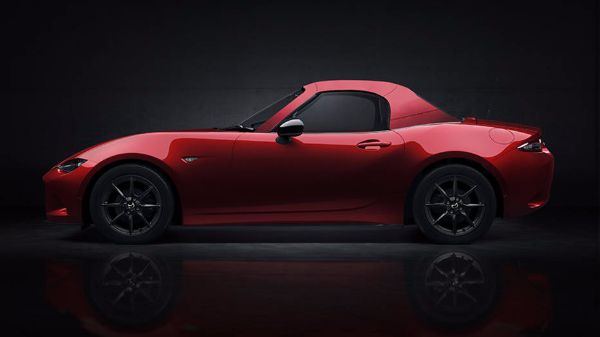 Rounding out our list of the fastest cars under 30K is the Mazda Miata MX-5. Not for its straight line speed, but for its agility in curves and good old-fashioned driving fun.

The Mazda Miata MX-5 is powered by a single engine no matter what trim level you purchase: a 2.0L four-popper. Power output is 155 hp and 148 lb-ft of torque. Both are low, but that is more than enough power to propel a car that is light enough for two people to pick it up. The low curb weight allows the four-banger to throw the Miata from 0-60 in 5.8 seconds. Where a Mazda Miata really stands out is in a curve. If you have ever driven one, you have probably thought it impossible to force it off the road; no matter how hard you tried.

Well, there you have it, our list of the fastest cars under 30K. Hopefully, we have helped you narrow your search for your next car. It is quite possible that we have missed a car or two. If you think a car should be on this list, sound off in the comments.