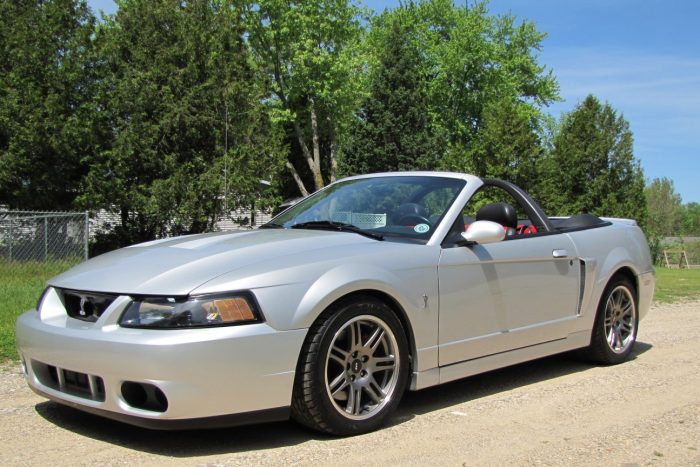 When the Ford Motor Company unveiled the 2015 Mustang to the world, three words seemed to resonate louder than any other: Independent rear suspension. Finally, the most iconic Pony Car in the world received a long-overdue upgrade to the 21st century of motoring. No longer would it be the butt of jokes referring to wagon axles or truck parts. No longer would it be forced to shuffle along with a solid chunk of iron connecting both rear wheels. Automotive journalists cheered. Children laughed and squealed. It’s even rumored that Ralph Nader shed a quiet tear of happiness. 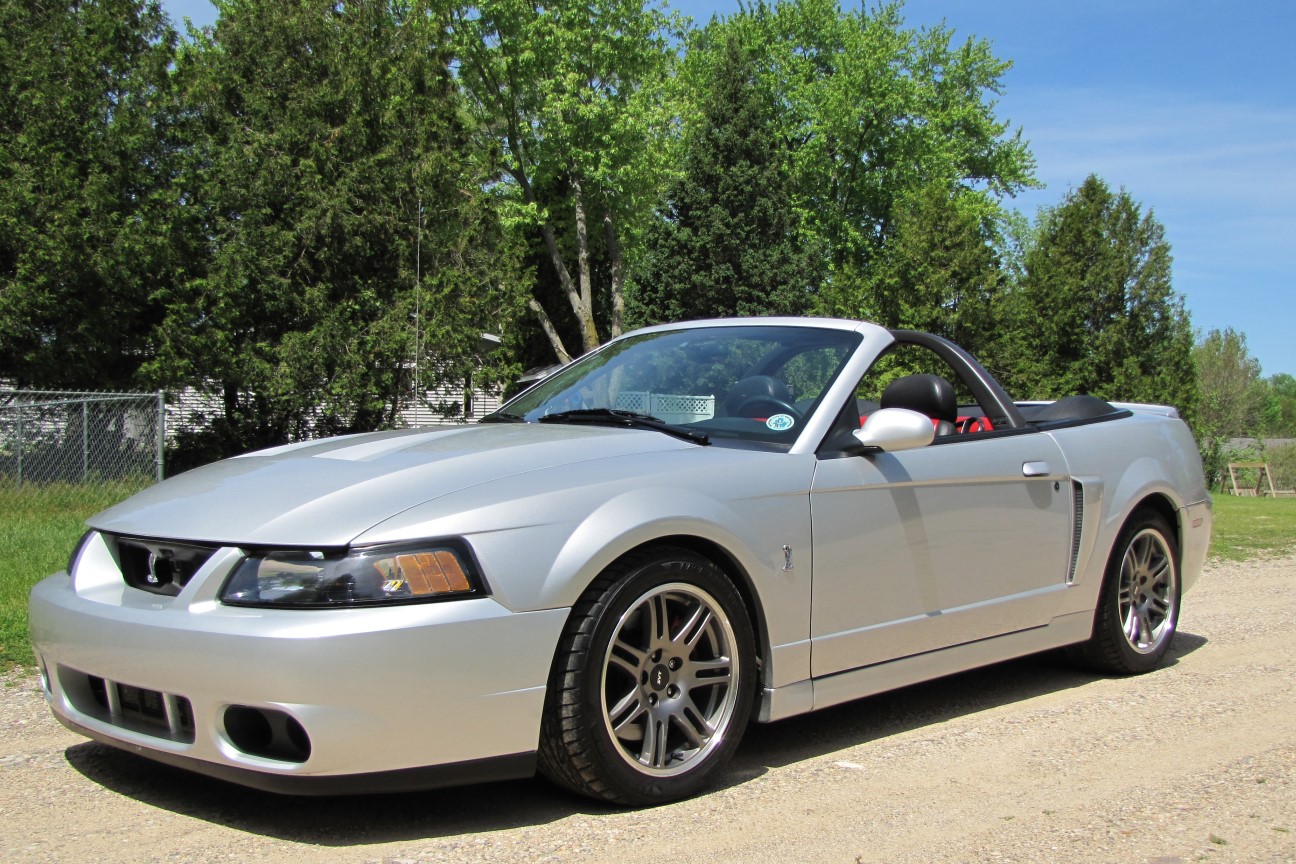 Which is all well and good, with one very notable, extremely glaring exception. The 2015 Mustang was not the first steed to actually sport fully-independent rear suspension. That honor goes to the 1999-2004 Mustangs adorned with the title of SVT Cobra.
Oh how quickly the world forgets, but yes, when Ford introduced the “new edge” Mustang body style in 1999, the top-of-the-line SVT Cobra variants received the Mustang’s first-ever independent rear suspension. And then in 2003, the niche team of engineers took it all to a whole new level with the introduction of a supercharger and numerous other tweaks.
The result? 390 horsepower was the official number released from Ford, but whereas the 1999 Cobras were famous for being slightly overrated in the power department, the 2003 Cobras went the other direction. Unofficially, the 2003 Cobra produced around 425 horsepower, all channeled through a Tremec T-56 six-speed manual transmission. Thusly motivated, the supercharged Cobra could run through 60 MPH in about 4.5 seconds, en-route to a quarter-mile time in the high 12-second range. It’s no wonder SVT staffers nicknamed the car “Terminator”—a name that has well and truly stuck with the car through the years.
The Cobra’s story takes a bit of a twist, however. With GM pulling the plug on the Mustang’s direct competition—specifically the Camaro and Firebird—and with the pony car sporting independent suspension, suddenly comparisons against the Corvette began to arise. Whether Ford had considered this from the onset of the Terminator’s development is uncertain, but the new Mustang turned out to be a surprising match for America’s premier sports car. While never quite the balanced corner-carver that the C5 Corvette had become, the Terminator still had enough stance and more than enough power to hang with the ‘Vette on a road course. When things straightened out, only the 400-horsepower Corvette Z06 could offer a challenge to the SVT-trimmed Mustang; standard-issue Corvettes would see Cobra tail lights. Not bad for a car that still utilized a basic chassis design from the late 1970s.
That’s not to say these cars were ideal in every sense. The Fox chassis was never designed to deal with modern technology, and as design requirements changed through the years, seating positions became increasingly awkward. Ask any 03-04 Cobra owner about finding the sweet spot behind the wheel—most are still looking, especially the taller crowd. And the new IRS did have some wiggle when dealing with all that supercharged grunt. Additional chassis stiffening was something Terminator owners soon undertook, with many others actually choosing to remove the IRS completely, in favor of a tried-and-true solid rear axle.
Wait, what? It’s true, but not for the reasons many people think.
Here’s the thing about the Mustang, the whole independent rear suspension saga, and why Ford didn’t stick with it back at the end of 2004. Sure, it’s more expensive to build a car with IRS than a solid axle, and Ford went on record saying as much, notably when talking about the Cobra’s successor, the Shelby GT500. But consider for a moment the Mustang’s target market—drag racers. When Ford unveiled IRS for the Cobra, the target buyers simply weren’t interested. They wanted the solid rear axle, which generally delivers better traction and reliability at the strip over an IRS setup. That’s why it took Ford another decade to get independent suspension back on the Mustang.  It’s not that the Cobra’s IRS setup was bad, as many people outside the core market believe. And it’s not an issue of money or Ford trying be cheap, as many auto journalists have said through years. The fact is, Mustang buyers simply weren’t ready for it yet. 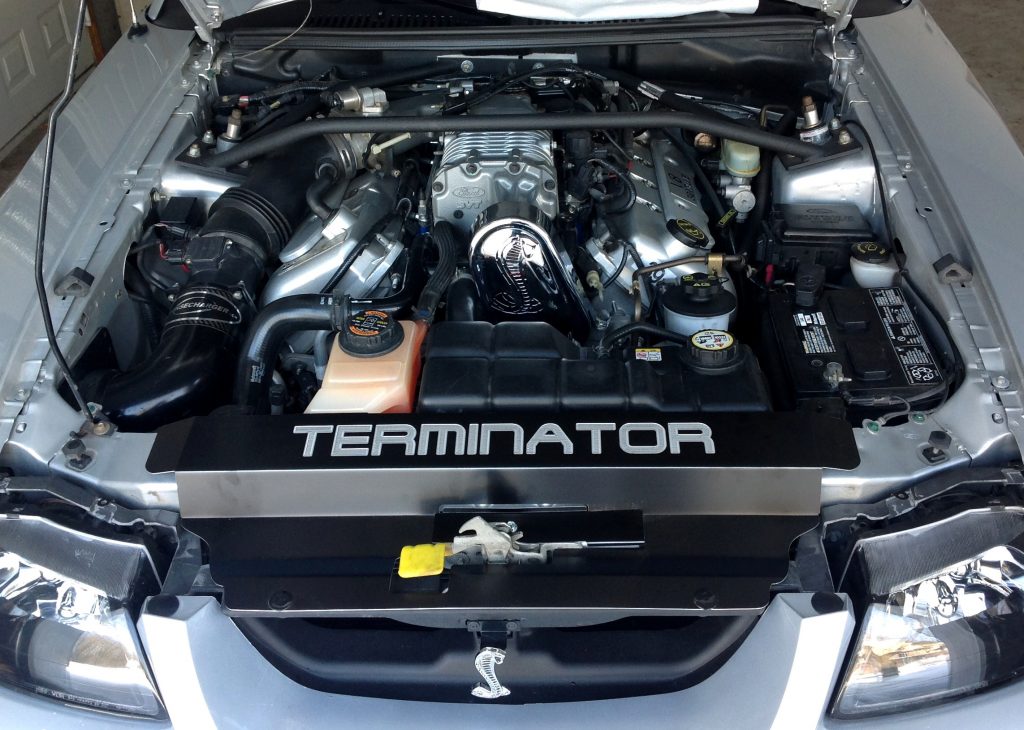 Ford ultimately built nearly 20,000 Cobras for 2003 and 2004, and they are already considered classics. So if you want all the performance of a new Mustang—complete with 400-plus horsepower and the coveted independent suspension—at half the cost and without taking a hit on depreciation, take a look backward. There just could be a Terminator waiting to change your future.