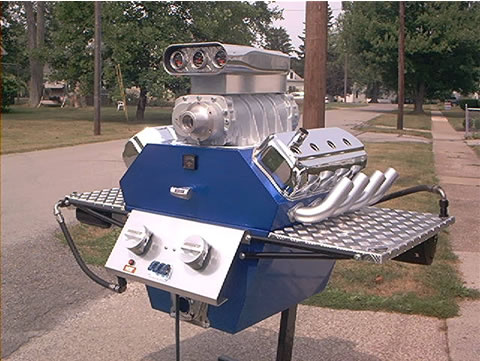 It’s the big holiday weekend and time to go paleo and char some animal flesh. You can express your internal combustion with these car grills. Check ’em out.

I don’t know about you but I’m just not all that interested in digging out the plasma cutter and torching a car in half so I can install a charcoal grill where the engine once sat. I prefer a more pre-fab solution. 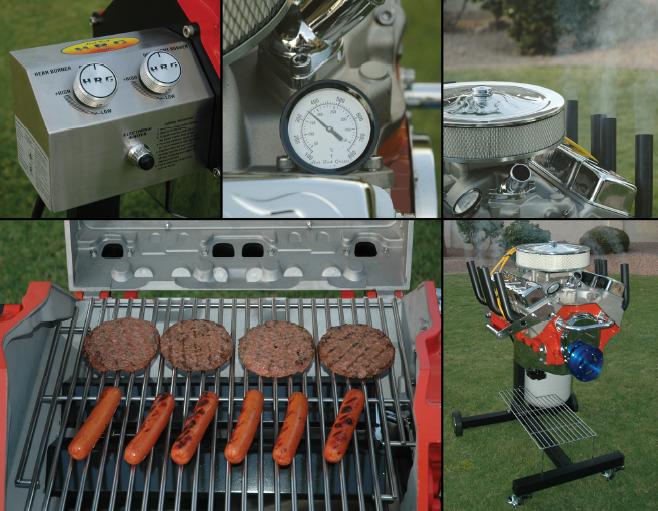 The company claims it’s the only grill on the market featuring an authentic 1:1 scale for a realistic engine look (small block Chevy?). The grill itself is manufactured by one of the largest Gas Grill manufacturers in the industry, with a die cast aluminum lid and body. Power output is 30,000 BTU through two stainless steel tube burners with individual controls. Personally I like the thermometer disguised as a fuel pressure gauge. 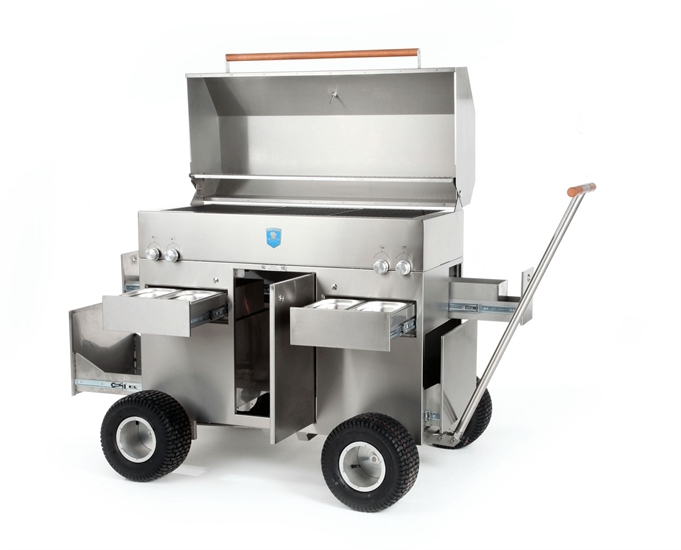 If this grill looks like a pit cart that a race team pulls trackside during the race, there’s a good reason. The engineers behind the Brennwagen used to work on a DTM team.  Under the hood, the GT 1200i impresses with four cutting-edge infrared burners with an amazing total power output of 15.6 kW – about the same power as a whole-house air conditioner. With its special high-temperature burners, the sizzlezone of the GT 1200i tops out at 1800° Fahrenheit, making it the ideal hardware for the perfectly seared steak. The name is a pun in German. A racecar is a rennwagen, and to burn is brennen, combined it creates Brennwagen. 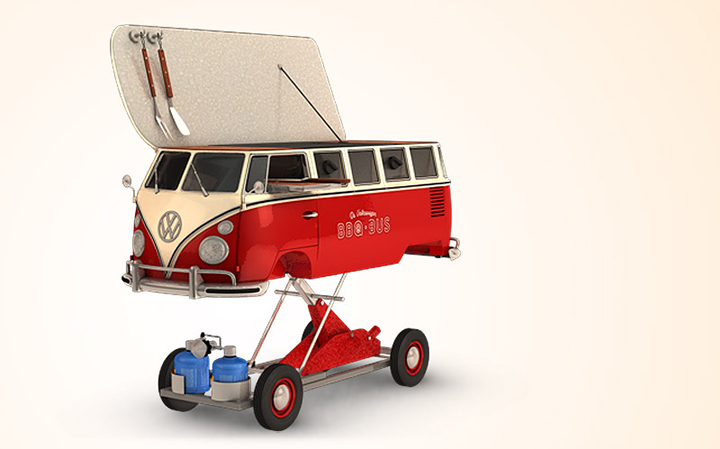 An Amsterdam-based creative agency teamed up with industrial designer Thierry van Raay to design BBQ-VAN for Volkswagen Netherlands. The Volkswagen BBQ-VAN is a full-scale model of a Volkswagen Transporter that’s a specially-built barbecue grill. Unfortunately it’s a one-off as The Netherlands has a special connection to the Transporter – Dutch VW importer Ben Pon requested a van body on a Beetle chassis and even provided a drawing to Volkswagen, which turned out to be very close to the final design, making him the father of the Type 2. 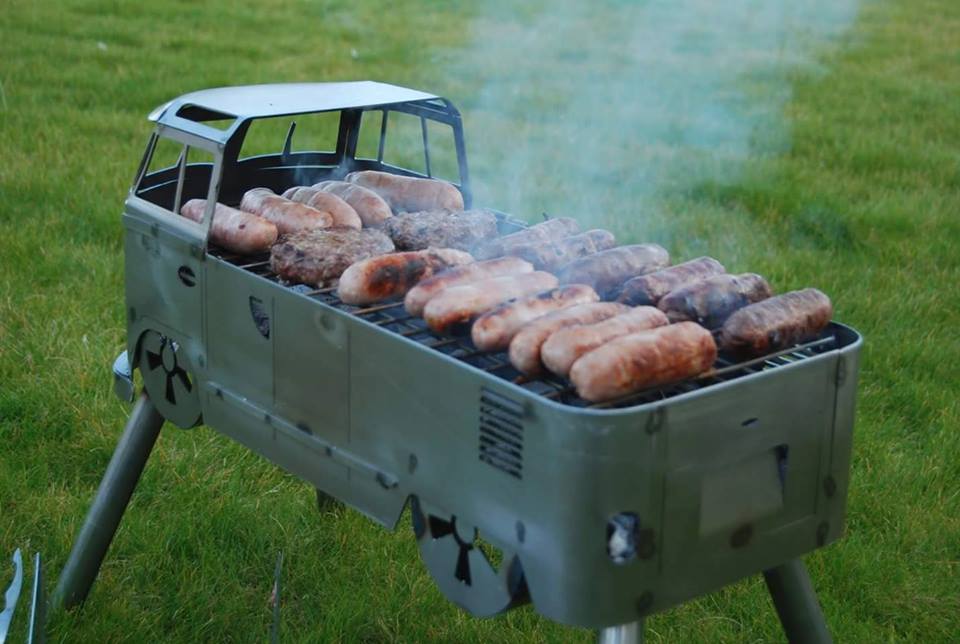 Since the BBQ-VAN is a one-off, here’s an option if you’re hot to purchase a VW Type 2 BBQ: The Busbecue is a functional portable barbecue in the design of the classic split screen transporter that’s compact and portable with a 21″ x 8″ cooking area. According to the manufacturer, “They can also be used as a fire pit as the nights get colder, for keeping warm, toasting marshmallows, or just simply because fire is fun.” Made in England by Chicken Shed Creations, the company will ship to the US.

The only information I could find on this grill was several years old, so eBay or Craigslist are probably the only ways to find one. It features zoomies that let smoke out, a powder coated grill box that can withstand 900 degrees, pistons instead of knobs, diamond plates side panels. The valve covers look like they’re straight off an old school Chrysler Hemi. Options included LED lights and switches for night BBQ-ing, as well as CD and MP3 player with indoor/outdoor speakers and remote control. The grills came in either charcoal or propane flavors. If you find one, let us know.
TOOL BOX GRILL 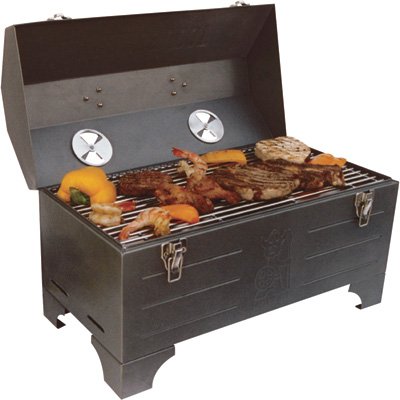 Tired of your tools mixing with charcoal ashes? Maybe it’s time to buy a dedicated toolbox just for grilling. This model is formed from  20-gauge steel construction, a pair of adjustable vents, and feature a 172 sq/in cooking surface. And they’re available in both gas and charcoal flavors. 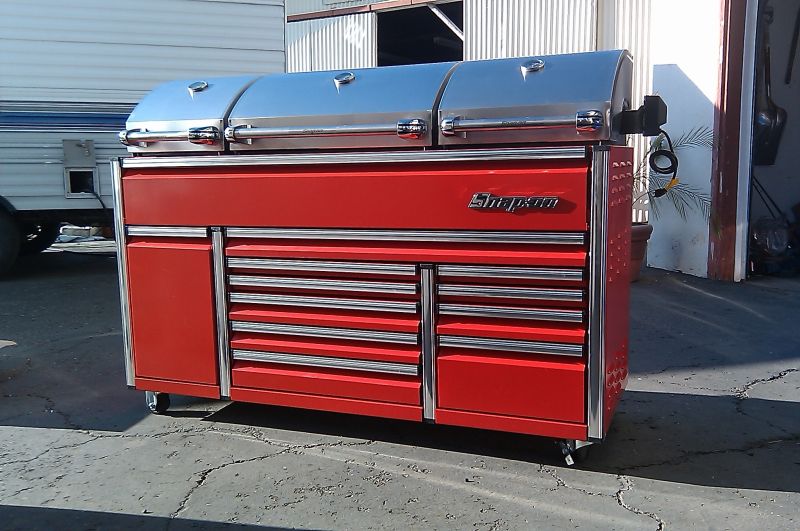 The famed tool company created a limited edition of 200 BBQ units, comprised of a grill, refrigerator, and a keg dispenser, all built into  their sturdy cabinets. This 48″ high, 64″ wide, 24″ deep monster is gas fueled and features multiple burners and a rotisserie. The entire assembly weighs close to 400 lbs. Snap-on no longer sells them, but they can be found on eBay (even new units) with prices into the several thousands of dollars.