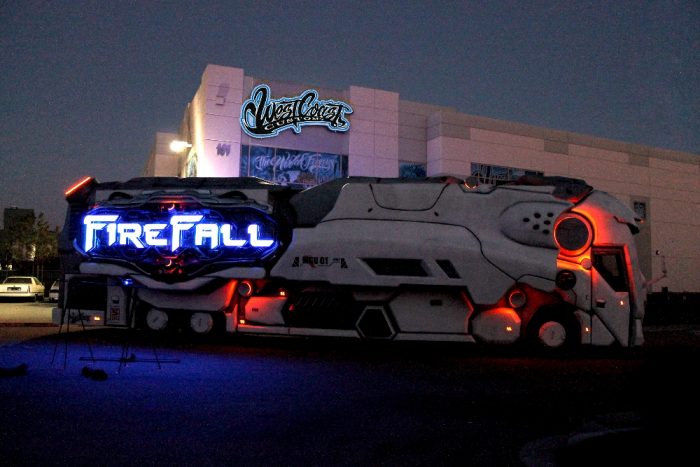 This article is going to start a little different than the rest.  But don’t worry it will still revolve around a vehicle of sorts.  So, have you heard a new PC game called FireFall?  Well apparently, its a brand new first person shooter style online game, that promises to be as big as, if not bigger than the Halo series.  For a brief synopsis of the game, the story line is as follows. 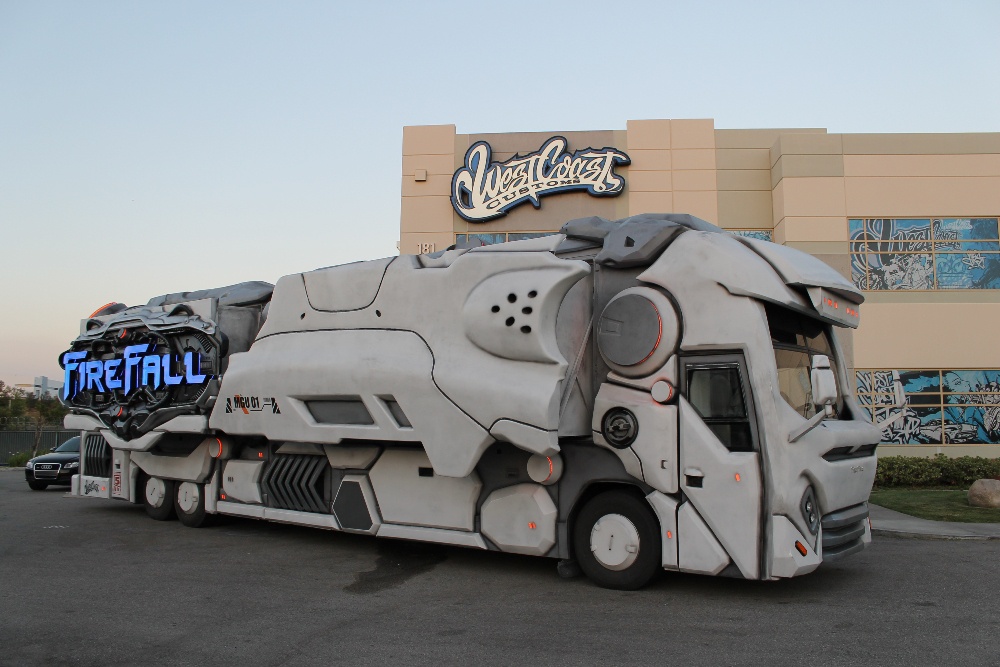 In about 200 years from now, an asteroid is destined to pass by the Earth on its way through the cosmos, when instead of it passing, it splinters and breaks apart, as it comes in contact with the Moon’s gravitational field.  As pieces break off of the monstrous asteroid, the final chunk finds its way even deeper into Earth’s orbit, and then collides with the planet, causing cataclysmic devastation.  Once the dust settles and the remaining humans begin to pull themselves from the ashes, all seems to be lost due to the fact that, the dust cloud from the impact has now enveloped the Earth, completely blocking out the Sun’s life giving rays, and warmth. 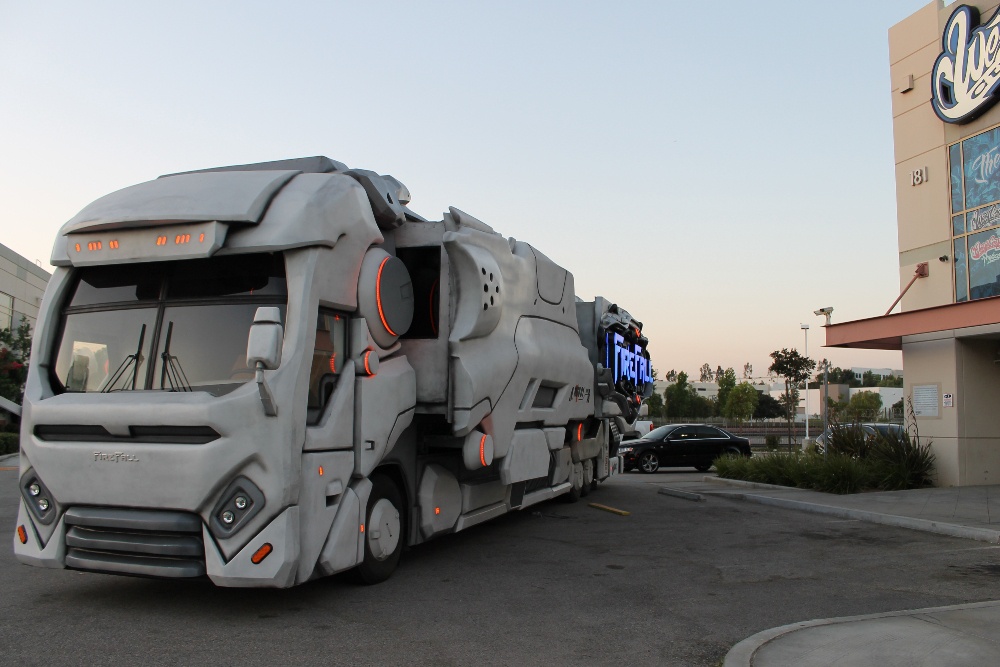 This event was known as the 9 Year Winter.  Even with the Sun no longer being readily available to life on Earth, salvation was to be had from mining a new mineral that came form the very source that destroyed life as it used to be known.  The mineral was called Crystite. Basically this mineral yielded an unlimited energy potential, and soon began a war for the ultimate control of the Crystite.  So ends the introduction, of this life changing event, and begins the struggle of mankind to find a new way to survive in this God forsaken world of death and destruction. 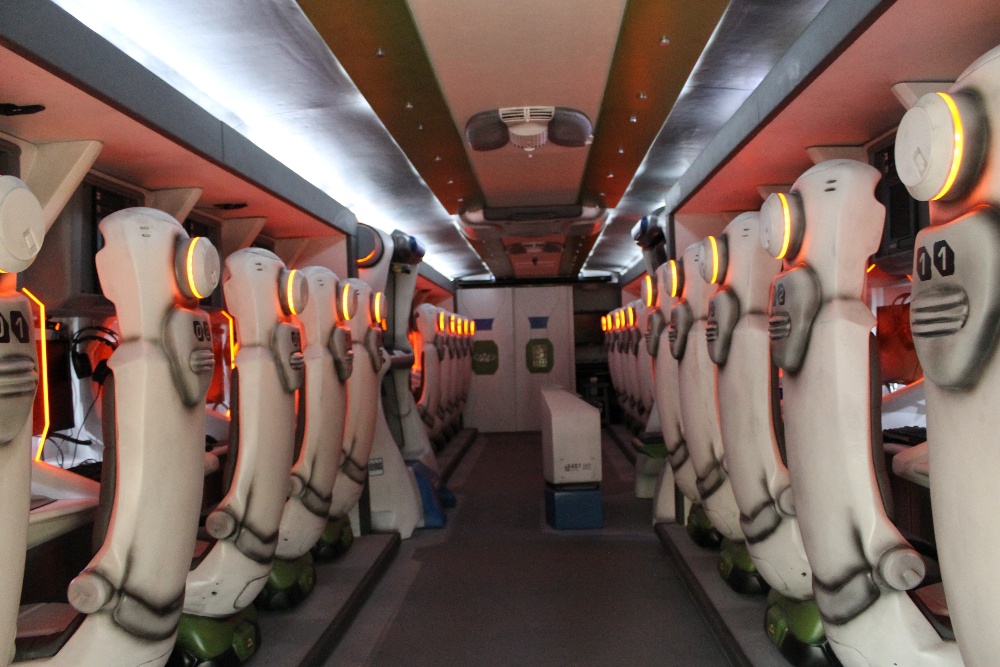 So where do you stand? I threw that last part in there, cool right?  Anyway, as I mentioned before this game is all the rage, and the creators of this new masterpiece of gaming excellence needed a way to push their wares on the world.  You know, advertise if you will.  So the guys over at Red 5 Studios came up with an idea, that kind of went something like this. “How hard would it be to turn a coach bus into a place where our game can be played by dozen or more players?” 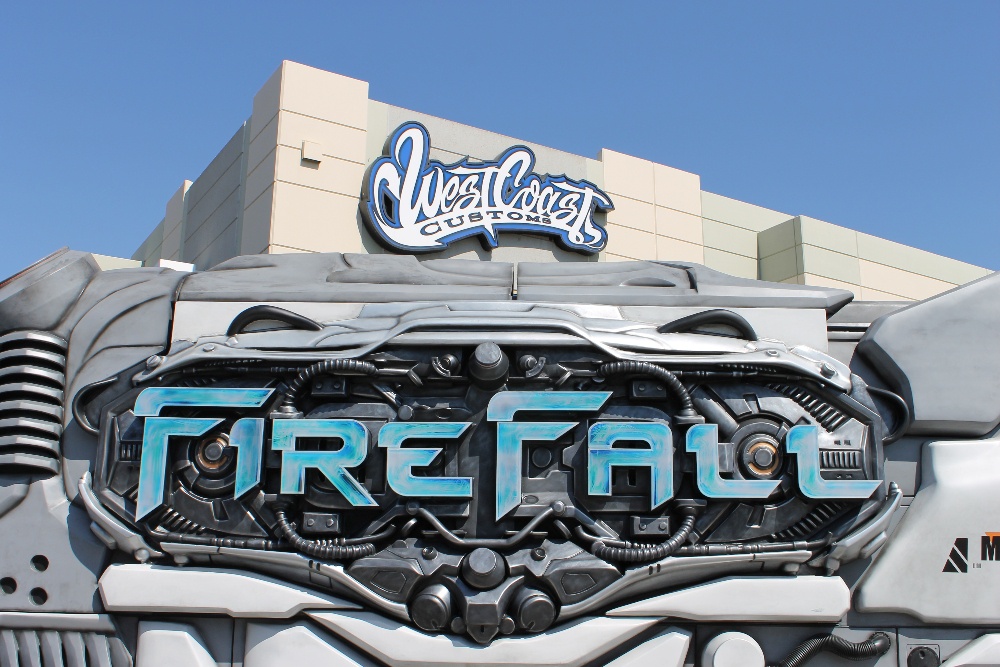 So what happens next, you ask well, Ryan Friedlinghaus and the crew over at West Coast Customs did just that. They procured a naked (empty) motor coach, and proceeded to load it up with a plethora of electronics.  There are twenty (20) gaming stations that are placed in a side by side manor, for ultimate efficiency.  All of the PC equipment was provided through AMD, and has been optimized for “REAL-TIME” game play.  What that means for the non-video gaming adults is, when this rig stops, and plugs in you can play FireFall via the strongest possible internet signal that’s fed & channeled throughout the coach.  The WCC team didn’t stop at the interior they knocked the ball out of the park, with the over the top fiber glass molded exterior.  Between the molding, the airbrushing, the interior lighting, the miles of wiring that was tucked into every nook, and cranny of this coach, the LED’s, and the extreme attention to detail, the FireFall MGU or, Mobile Gaming Unit will be nothing short of astonishing.

The FireFall game has a ways to go before it truly takes over the gaming world, but with the MGU providing nothing, but pure and unrelenting access to this game, it won’t be long before absolute notoriety is achieved.


13 Fantastic Gems You'll Be Able to Import to the US in 2018
10 Best 4 Seat Convertibles
10 Women Drivers Rewriting The Stereotypes
10 Once Illegal Cars You Can Finally Import In 2017
Driven: 2021 Subaru Outback [Review]
The 7 Fastest And Weirdest Cars and Their Ads of the 1970s!