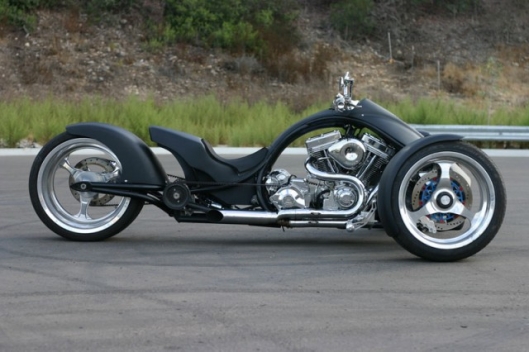 It’s hard to say exactly why trikes aren’t more popular than they are. Probably because motorbike purists just can’t quite bring themselves to drive one. And it likely doesn’t occur to the casual driver to try one out. I’ve yet to ever take a joy ride on one myself but it has to be said, they look like a lot of fun.

There are loads of advantages. For starters, with it’s low center of gravity and wide stance, you get all the stability of the trike but the same open air experience as a motorbike. The power is there but so is the sticky traction of a tiny sports car. Road trips would be a total blast since they’re a little more capable of carrying extra cargo. Sure you have far greater maneuverability and narrow width to a bike, but you can’t drop a trike.

There are several out there available but one of the sexiest is the F3 Adrenaline by a company called Trirod out of San Diego. They make one of the hottest trikes on the market simply because their goal was to build a machine that was performance oriented. They’ve implemented technologies from Formula 1 racers and the aerospace industry.  When building the F3 Adrenaline Trirod decided on the layout of two wheels in front and the third in the back. This provides extra cornering stability especially with the engine positioned towards the front. They’ve utilized a Formula 1 style front end suspension system. It’s double, unequal, non-parallel a-arms position the outside tire for maximum traction. This enables the F3 to corner in excess of 1g. Equipped with roll center height and spindle offset it’s designed to provide optimal handling and reaction from the road surface. It’s made lightweight with carbon fiber body and fenders. 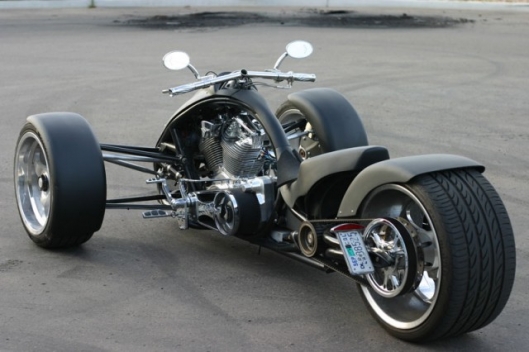 Powering this little beast is an air-cooled V-Twin, fuel injected JIMS Twin Cam 120 cubic inch engine. Mated with a 125 Tooth, Kevlar reinforced belt drive and 6-speed transmission. This produces 120hp effortlessly. Needless to say the F3 Adrenaline is a demon on wheels. There is no shortage of fun to be had on this thing. Unlike the Can Am Spyder Roadster, the F3 Adrenaline is not designed for long road trips, it’s more of a pleasure vehicle.

Trikes are fairly rare. You don’t tend to see many of them on the road but when one passes by they get a great deal of attention. Perhaps it’s the association of tricycles as a children’s bike that has given trikes such a bad rap. Regardless, as we move towards more size conscious and economically inclined vehicles it’s very likely we’ll see more of these on the road.