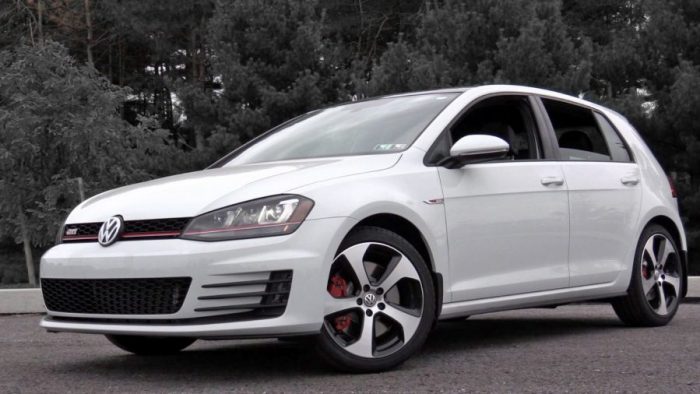 Hatchbacks, for whatever reason, never caught on in America like they did overseas. Maybe the influence from Motorsport, with rally racing being popular worldwide and stock car racing being most popular in the States, that made consumers want to emulate different things. After all, nothing can prove that one car is superior like numerous races each season in front of thousands of spectators.

If you’re looking for an updated version then check out new list of best hatchbacks 2018. 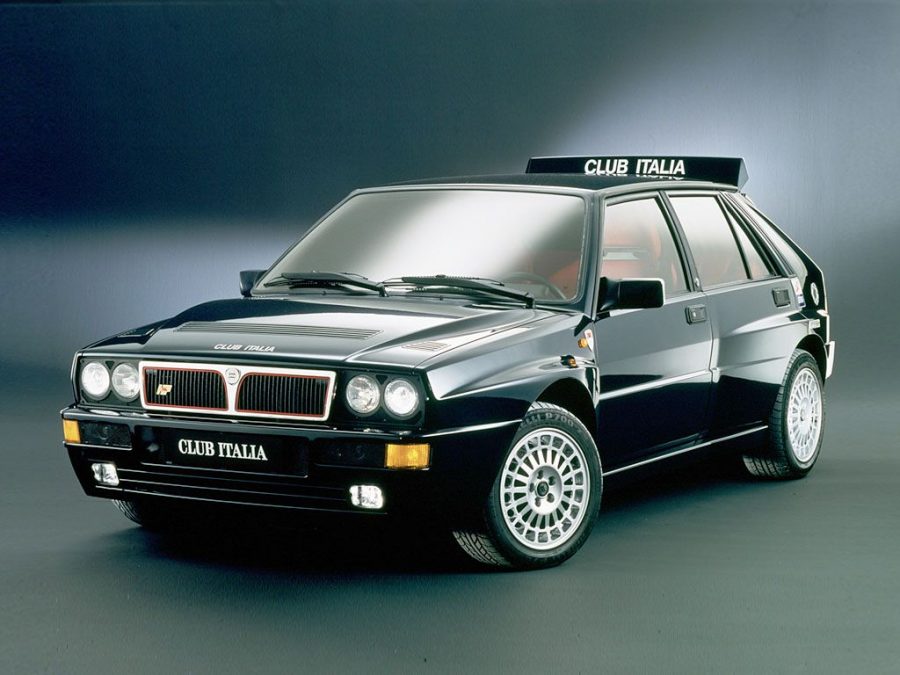 Because of that, few gearheads and fast drivers took to the small souped-up hatchbacks because the alternatives; rear-wheel drive muscle cars that were affordable, offered them all that they wanted. That means that they never experienced having a practical, useful daily driver that could go the grocery store on Friday and the race rack on Saturday. 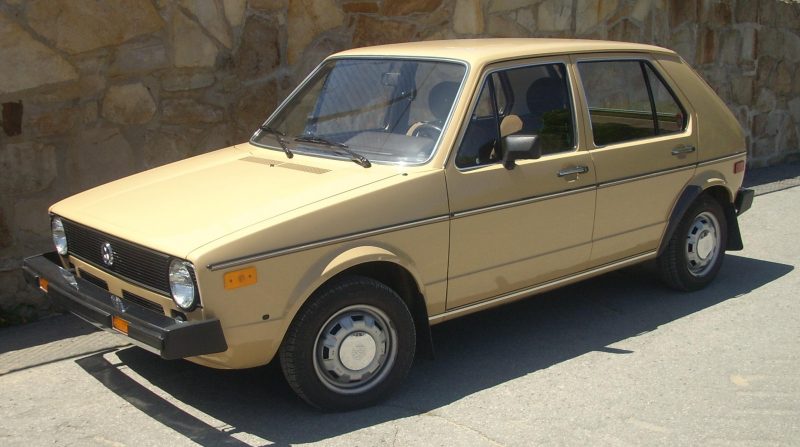 The Americans that took to hatchbacks ended up being of the more eco-minded and frugal sort, meaning that popular models were slow and stripped of the go-fast bits. Luckily, this is changing and 2017 brings a new, quick batch of hatchbacks to dealerships for customers to purchase. Here are 7 performance hatchbacks coming out in 2017 that will put a smile on the face of everyone who drives them.

The runt of the litter in 2017 is definitely the Fiat 500 Abarth. It is smaller than anything else on this list and also has the least horsepower. There is a lot less car to push around, though, so the 157 horses that the 1.4 liter 4-cylinder cranks out provides a lot of fun for the driver. 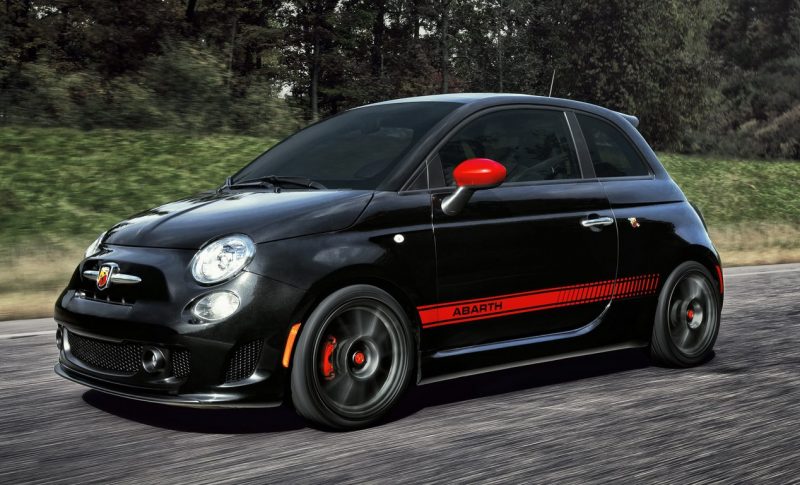 That fun doesn’t necessarily translate into stellar performance, unfortunately. 0-60 takes a sluggish 6.9 seconds. If you’re looking for performance out of a little hatchback, you may be better off looking a little further down the list. The 2017 Fiat 500 Abarth is for people who want a stylish city car that is slightly more fun than most cars its size. And it does that job perfectly. 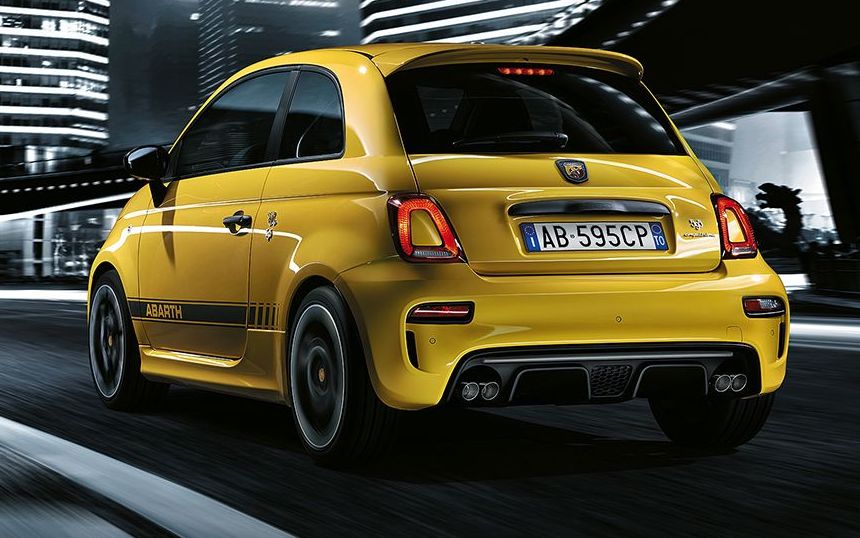 It gets up to 32 mpg, which again isn’t amazing for a car this size. Every flaw aside, all you need to know about this car can be learned from the exhaust note. It snarls, barks, and seems to enjoy making noise more than it enjoys making speed. This car is an inexpensive way to have a great time driving and look good doing it.

The first hot hatch there ever was is still going strong today with the 2017 Volkswagen GTI. Don’t think that the GTI is some dinosaur left over from days past that is being kept alive for the sake of nostalgia. The current trend of VW modification and the massive following the whole brand has certainly helps, but it’s important to remember that this is a great car. 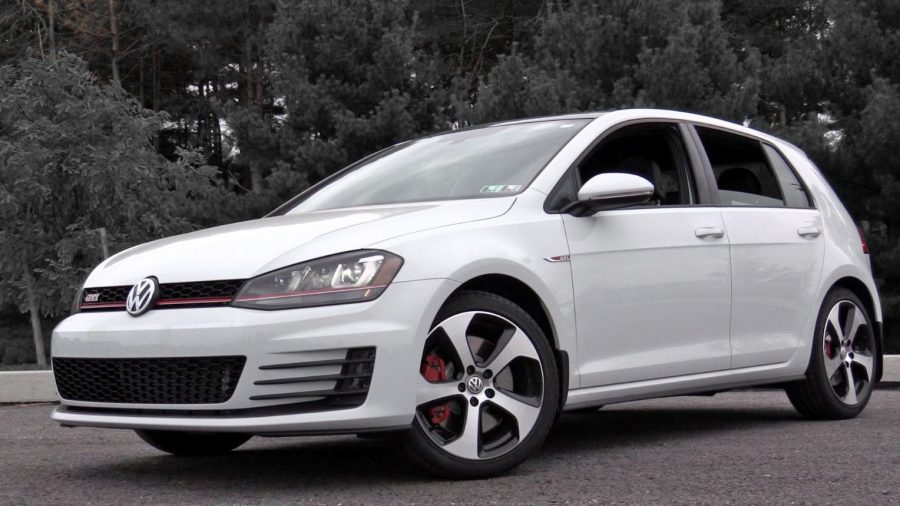 Maybe it’s the image of the typical GTI driver being a college-age male who loves stickers, loud music, and 2-piece rims, but it seems like there is something keeping more normal members of the motoring public from seeing the magic of this car. The 217 model comes with 220 horsepower and manages 0-60 in 5.8 seconds. That is impressive by performance car standards, let along those of a practical family hatchback. 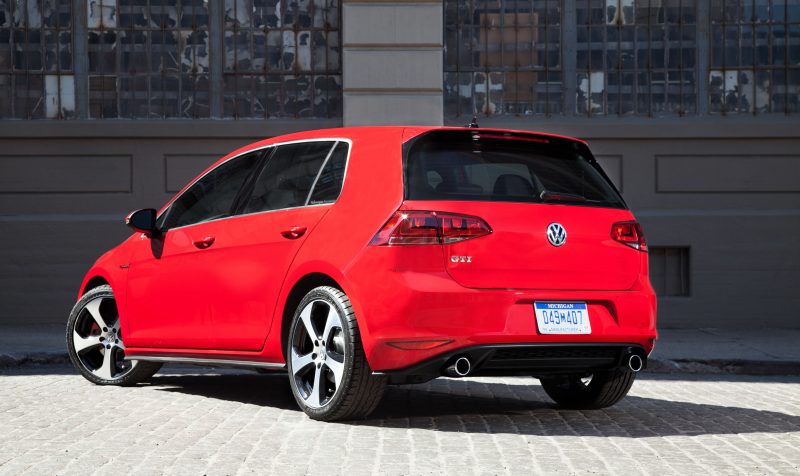 The front diff is a work of art and works to pull the car into corners, making it an excellent vehicle for learning driving dynamics and for just, ya know, driving. The GTI has had decades to work out the kinks, and that really shows in the 2017 VW GTI.

In the world of serious performance cars, new Minis are often overlooked. They are seen as a novelty, and while the Cooper S gets some respect, it doesn’t have a following like VW or Ford. But the 2017 JCW Mini Cooper S has a couple of distinct advantages over other fast hatchbacks. 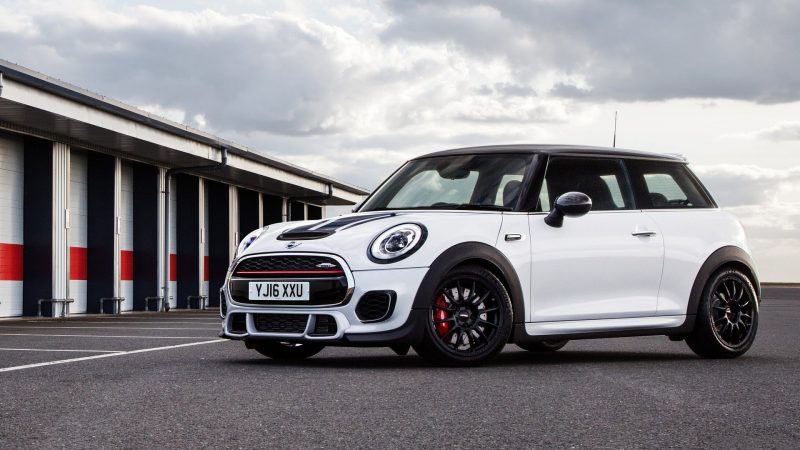 For one thing, the chassis is built as a ready-to-go track car and then things are added on from there, so you benefit from the uniquely wide and long wheelbase for a car this size. Also, with 228 horsepower and a 0-60 time of 6 seconds flat, the Mini blows the other subcompact offerings out of the water in terms of performance. As fast as that sounds, the Mini feels even faster from the drivers seat. 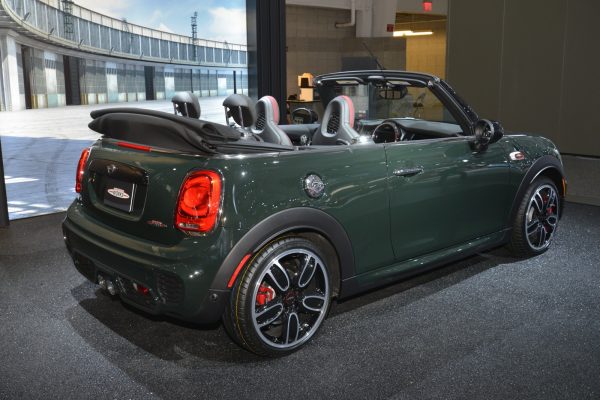 I think the Mini does suffer from an image issue. It hasn’t really captured any of the raw, utilitarian charm that usually accompanies fast hatches. The Cooper S is great and the JCW versions of the Cooper S and Clubman S are fantastic performance compacts. The JCW Clubman S is even available with all-wheel drive and a manual transmission, all in a small wagon! Mini is up to some great things, and I hope they hit their stride and become as popular as they deserve to be.

The 2017 Ford Fiesta ST doesn’t bring a whole lot to the table that is different from the previous years model. In this case, that is definitely a good thing. The Ford Fiesta ST gave customers looking for a small, fun, and inexpensive option for a daily driver. It encapsulates exactly what a small hatchback should be. 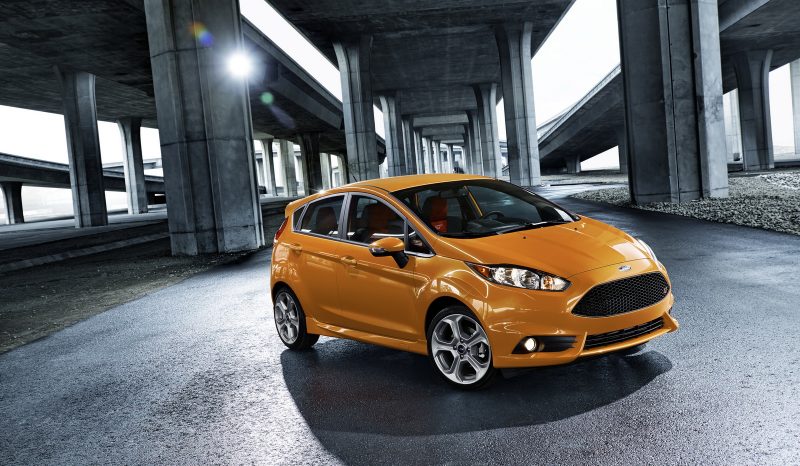 Don’t let the 7 second 0-60 time fool you, this car is built to feel fast to drive and use its dynamic chassis and suspension to eat up the corners. Its 197 horsepower 1.6 liter 4-cylinder engine packs a surprising punch in a car this size. The best part is that everything is designed to allow you to use all of the engine at your disposal at normal times. You don’t need to take it to a track for it to be fun. 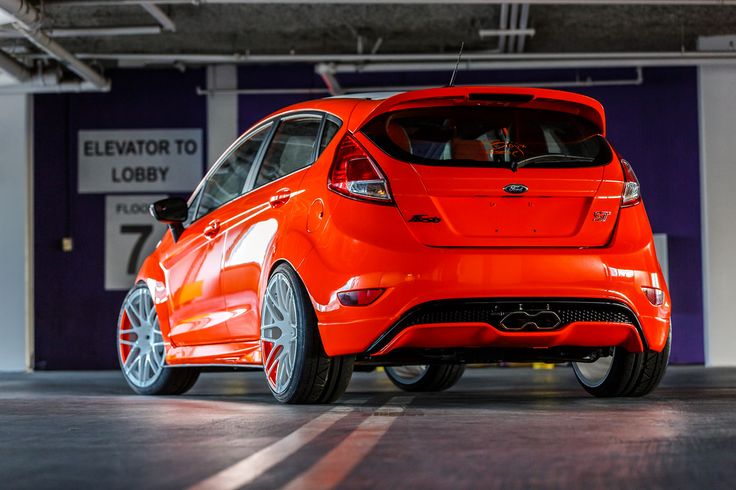 Too many performance cars these days boast about track times to drivers just looking to drive on the highway and put down huge power numbers that increase performance at speeds that most people will not reach. The 2017 Fiesta ST isn’t intimidating or wasteful. Think of it like a friend who is always sort of nudging you to have a bit more fun once in a while.

Now, the 2017 Golf R is this high up on the list because it is an awesome car. That said, I do think it could be improved a little. Remember the Golf R32? It was the previous fast, all-wheel drive Golf that VW made and it had a distinct, wide body and just oozed this certain air of mystery. The Golf R kind of seems like an undercover performance car. 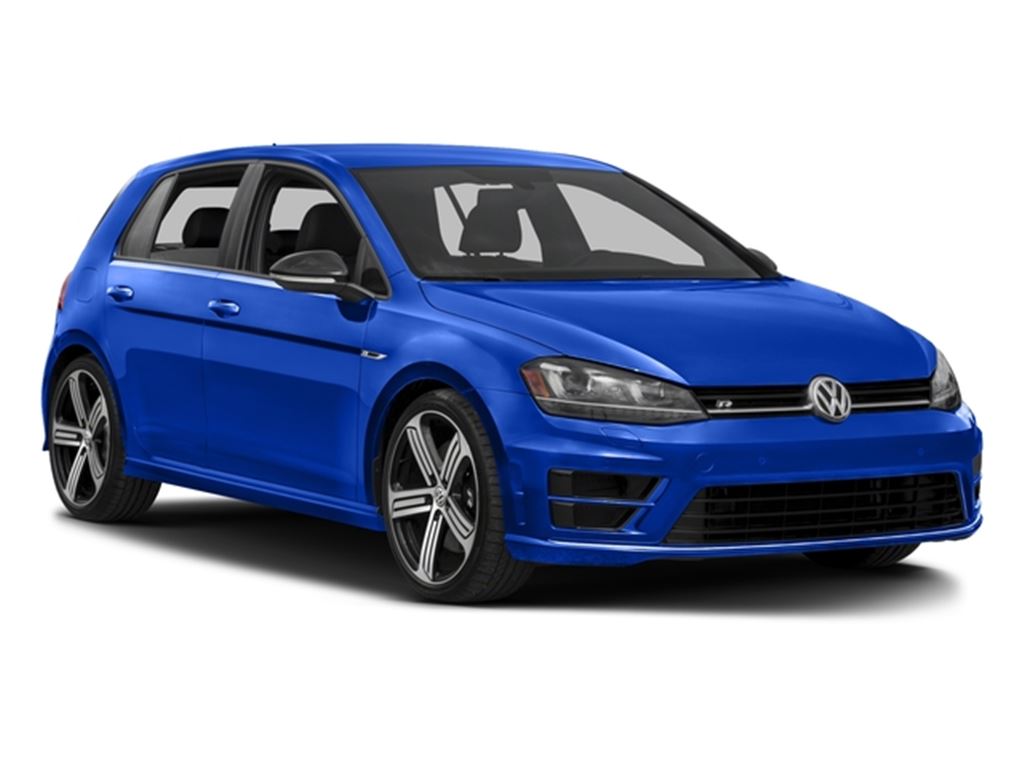 With a turbocharged 2.0 liter 4-cylinder engine and an all-wheel drivetrain, the Golf R can reach 60 mph in 5.2 seconds. The manual does it over half a second slower, but I don’t know it that justifies putting an automatic transmission into a performance Golf. While it looks tame, this is the ultimate iteration of the Golf, which has been a formidable performance icon for decades. 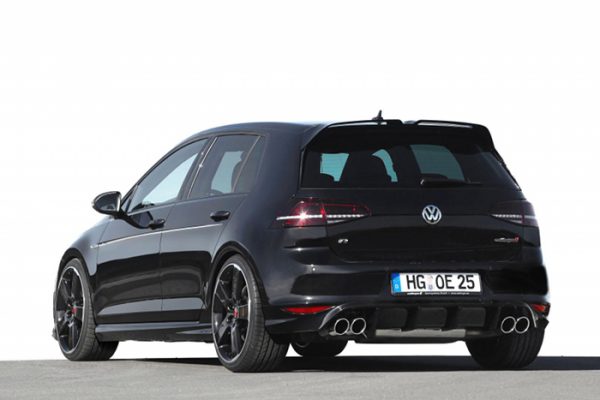 It seems like the 2017 Golf R needs just a little something to push it over the edge. It is the ultimate Golf, but it looks like a very normal car. Some people like that, and they do have plenty of good points, but there is something about big spoilers, hood scoops, and fat fenders from the factory that just get people excited. If you want the craziest yet most normal car on the road today, look no further.

If ever there has been a car that had a real chance of getting Americans to love the hatchback, it lies in the hands (wheels?) of the 2017 Ford Focus RS. In the same way that the Ford Fiesta ST gives budget-conscious but otherwise fun people a wonderful and reliable option, the Focus RS gives serious gearheads and track enthusiasts a practical daily driver And boy can it do a lot. 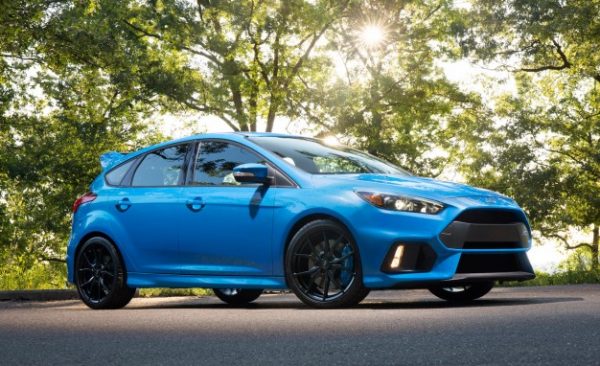 It’s a hatchback with four doors. Groceries? Soccer practice? Moving to a new apartment? The Focus RS has you covered! Then you can unload it, kick your friends out (power to weight ratio over companionship any day). and take it down to the track for some autocross. Or maybe just a few laps. Want to drift too? There’s a button to allow the rear differential to slip less and make more smoke when the track gets windy. And that rear diff is going to have to withstand a lot of abuse from the 2.0 liter, turbocharged engine making an astonishing 350 horsepower. This takes the whole thing from 0-60 in 4.6 seconds. 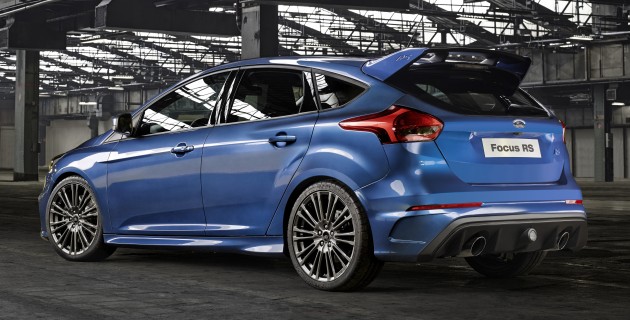 And these aren’t party tricks or some stupid heavy engine crammed into a mediocre chassis. This car is tight, tuned, and precise. There is torque vectoring, adjustable suspension, Recaro seats, and even big Brembo brakes from the factory. In fact, the only reason anyone has for not getting a 2017 Ford Focus RS is the wait behind the 3700 people who have already ordered. This car is just something else, and if Ford can keep up the momentum it’s gained dominating the performance truck and muscle car world and move into hatchbacks, then we will see some awesome things in the years to come.

While this might not be what you would traditionally think of as a hatchback, it does, in fact, have a hatch. And since the hatch is located squarely in the back, that makes the 2017 Ferrari GTC4Lusso the fastest hatchback of 2017. This is not particularly surprising with a name like Ferrari and a price tag of $300,000. 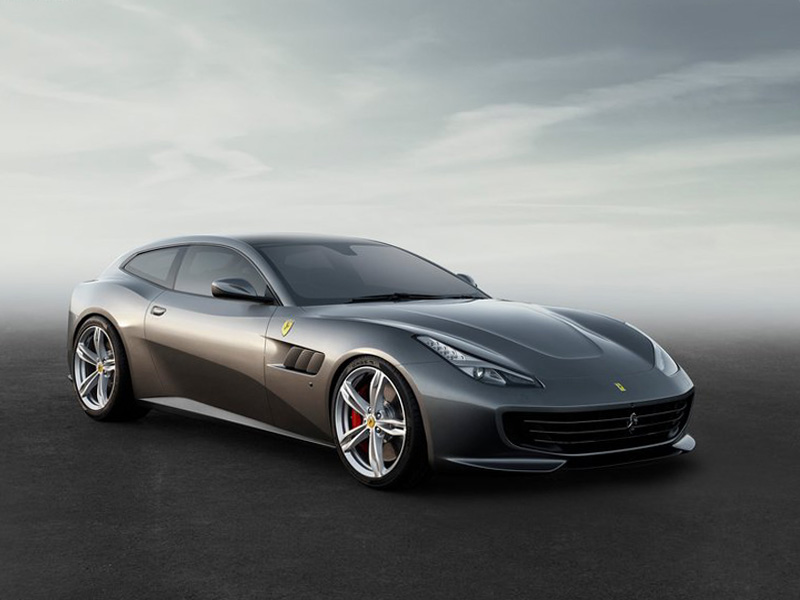 But then again, this car is not for the casual commuter. Sure it has four seats and a nice amount of trunk space, but it can’t shake the fact that it looks like it is up to no good. So what goes into this car that makes it more than ten times the price of other cars on this list? It is, after all, a four-seat, two-door hatchback. It does have all-wheel drive and all-wheel steering; both interesting features to be found on a car with the prancing horse on the hood. 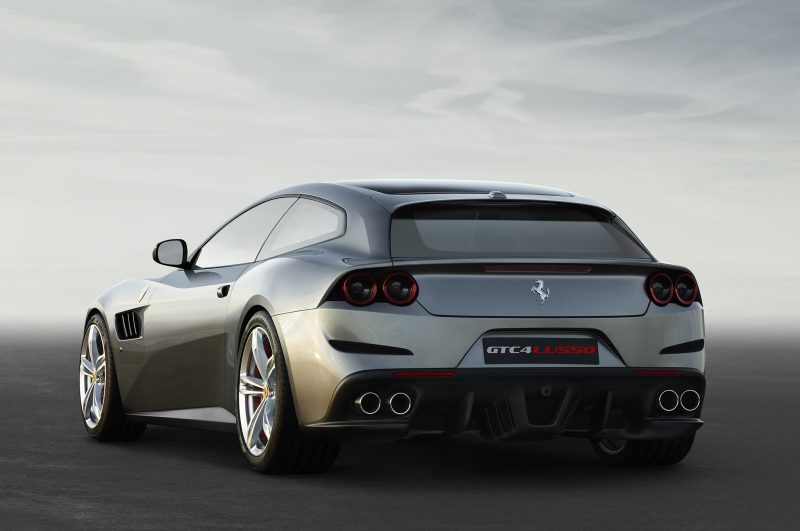 The rest is just a list of dream parts that only Italian craftsmen could manage to put together in such an elegant and ferocious package. A 6.3 liter V12 engine that revs up to 8000 RPM, tuned exhaust, and enough electronic gadgets to keep you occupied for hours. All of this results in a 0-60 time of 3.4 seconds. You and your three passengers will be comfortable as well, given that the interior is as luxurious as any high-end luxury car.


10 Longest Produced American V8 Engines
The Best GPS App: Navigation Made Easy
The Best Cars of 2018
10 Cheap Cars that Can Go Over 150 MPH
10 Best Performance Trucks
7 Facts About the Ford Emblem: A Complete History Since 1903