In the 1970s all the way to the 80s, kids who loved trucks, cars, and motorbikes had a wide range of toys to choose from. Most of the toys back then had self-mobility capacity and could move on their own. They were also modeled after popular TV and movie icons, which made the toys must-have items for most kids back then. The 70s and 80s kids are all grown up now but still can’t let go of their best childhood memories. This is probably why many adults today are willing to spend serious cash to buy some of their favorite childhood toy cars. Let’s look at 12 vintage toy cars whose worth would make you want to turn your attic inside out.

Check Out The Most Expensive Vintage Toy Cars For Sale! 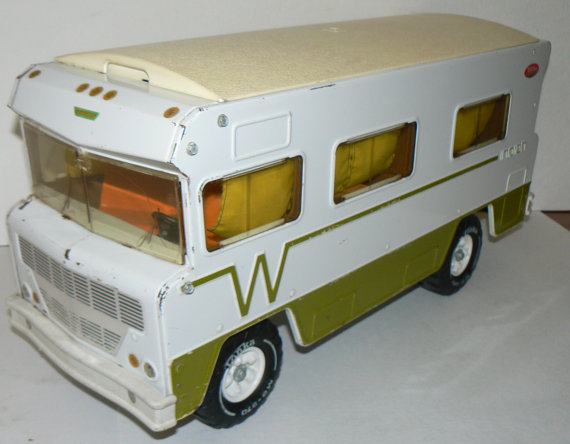 One toy that has remained in fashion since the mid 1960s up to now is the large Tonka truck. A popular version was the Tonka Winnebago motorhome that hit the shelves in the mid 1970s. The Winnebago had a roof that could be lifted to reveal a complete replica of a real Winnebago motorhome complete with a living room, kitchen and bathroom. Many will remember the toy motorhome’s two clothed dolls and Scamp, the dog. It was designed like other steel framed Tonka trucks; two feet long, sturdy, rugged, and quite durable.

How much does it cost today? Vintage Tonka motorhome toys are currently going for between $40 and $150 on EBay. The price much depends on the toy’s condition. There are even listings on eBay for the toy in top condition, box included, that goes for $300. The price shows just how rare this toy is. 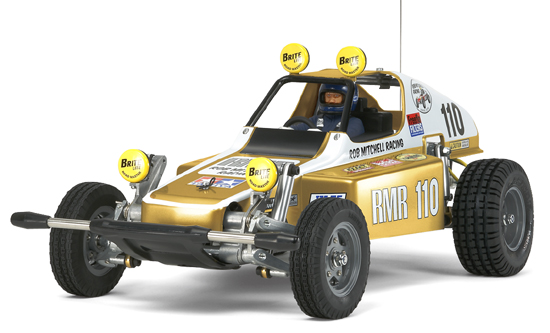 If you are a 1980s kid, you’ll remember how every child in your neighborhood yearned for a Tamiya Wild Willy, those electric radio controlled cars. The cars were sold in a kit and had more powerful features and details than any other toy back then. Popular models included the off-road buggy and 4-wheel trucks. Memorable examples include Hornet and Grasshopper launched in 1984, the Hot-Shot 4×4 released in 1985, and the Monster Beetle that hit the market in 1986. Looking back, the Tamiya remote controlled was an awesome experience for a youngster. You had to assemble the car by yourself, with a little help from your dad or elder brother if you were lucky to have one. They had a real suspension system and huge gripping wheels.

The toy car’s worth today? There have been several re-issues of the toy car from the manufacturer which all look the same to the casual observer. However, the collectors only seek for the original models and are willing to pay as much as $300 for a car in working conditions. If in a box and not yet built, the toy can fetch thousands of dollars. 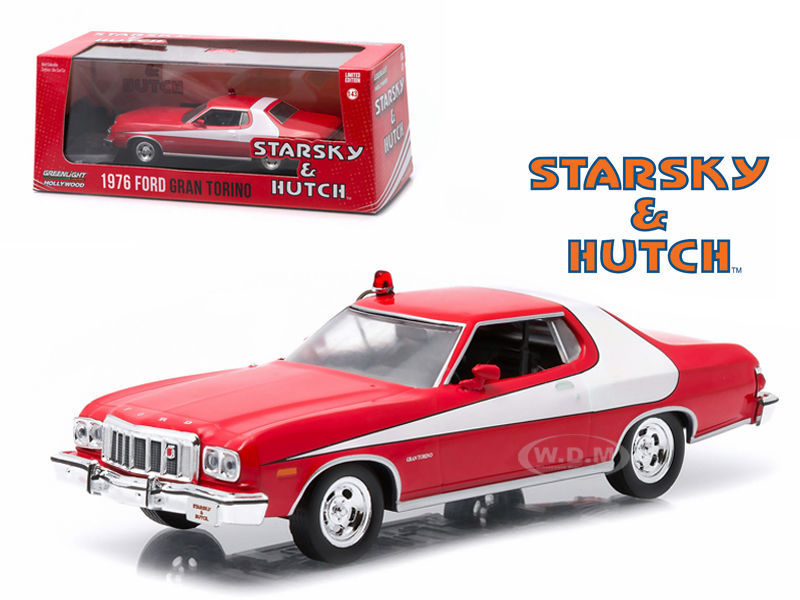 Mego, the cool toy manufacturer of the 1970s, made great toy cars back then including the Gran Torino featured in the TV series Starsky and Hutch. This battery operated toy car carried action figures from the show and could even swivel and spin in any direction using a motorized wheel placed underneath. It was a whole 15-inch long and came with all the features of a 1970s police chase scene, including a barricade and a trash can to run into. Notably, it only cost $12.

How much is the Mego Starsky and Hutch ride worth today? The battery powered toy ride is quite rare to come by today. There is one listed on Ebay for $199, but it’s not in working conditions despite having its original box. A good one in working conditions could cost as much as $300 to $400, if one is lucky to chance upon one. 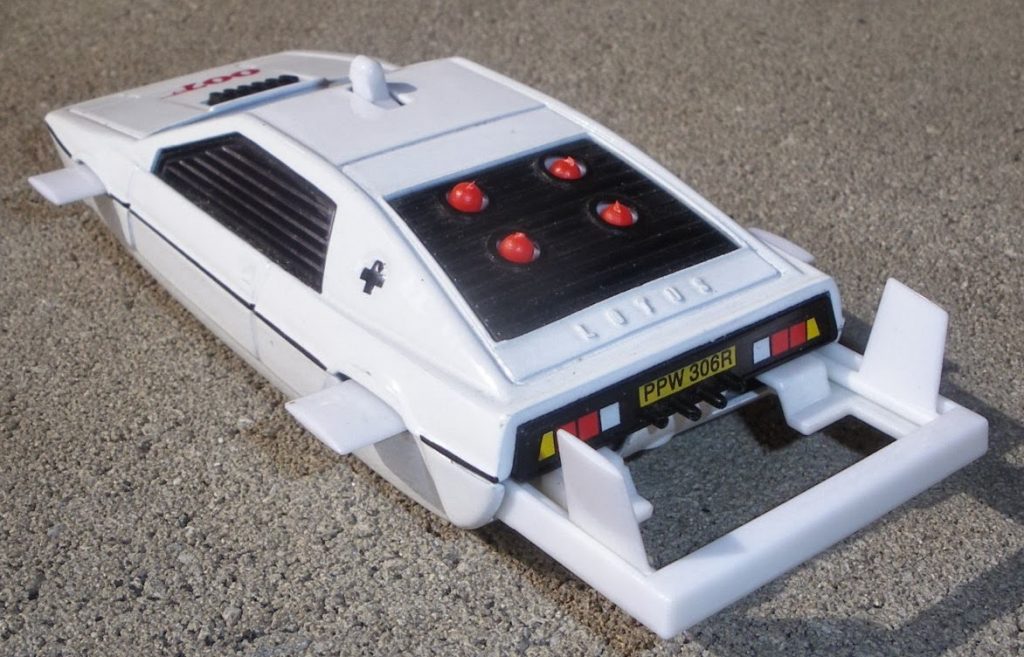 James Bond cars were all the rage in the 1970s. Every kid back then had a Bond car in his or her list of top 10 cars. The white Lotus Espirit featured in the 1977 Bond movie The Spy Who Loved Me was a big hit. Its wedge shaped look was quite captivating not to mention the things it could do such as suddenly turn into a submarine and course underwater with its breathing occupants still intact. So when toy manufacturer Corgi released its toy version of James Bond’s car-submarine, all kids wanted to own one. The toy was a nice replica of the original car, complete with stabilizer fins for underwater maneuvers.

This toy version of 007’s Lotus Espirit is available in the market for varying prices depending on the level of wear. For instance, there are well worn versions going for $20 but getting a good one still in box condition is quite hard. There are a few listings of the toy car in excellent shape on EBay for as much as $200. 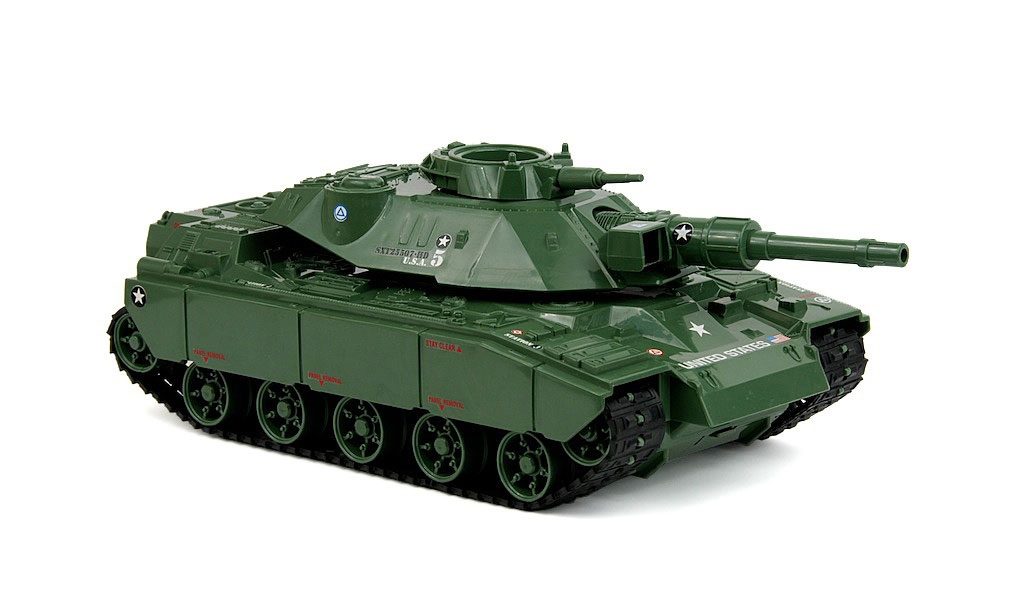 G.I. Joe toys were quite popular in the 1960s. To keep them relevant in later years, toy maker Hasbro released a line of GI Joe toys in 1982. GI Joe toys were further popularized by the 80s cartoon series of the same name. One of the most popular toys in the G.I. Joe line was the Motorized Battle Tank also known as M.O.B.A.T. It ran on two D-cell batteries and was only $14.99.

Today the toy is worth far more than its original price. A G.I. Motorized Battle Tank in prime conditions is valued at $325 according to leading toy seller Toyworth.com. There are a few listings on EBay for the toy.  There is one that comes with its original box, but with a few scratches and dings being sold for $250, while another one that is not actually working goes for the same $250. There is still another EBay listing for a MOBAT in excellent conditions going for $149.

The Dukes of Hazzard 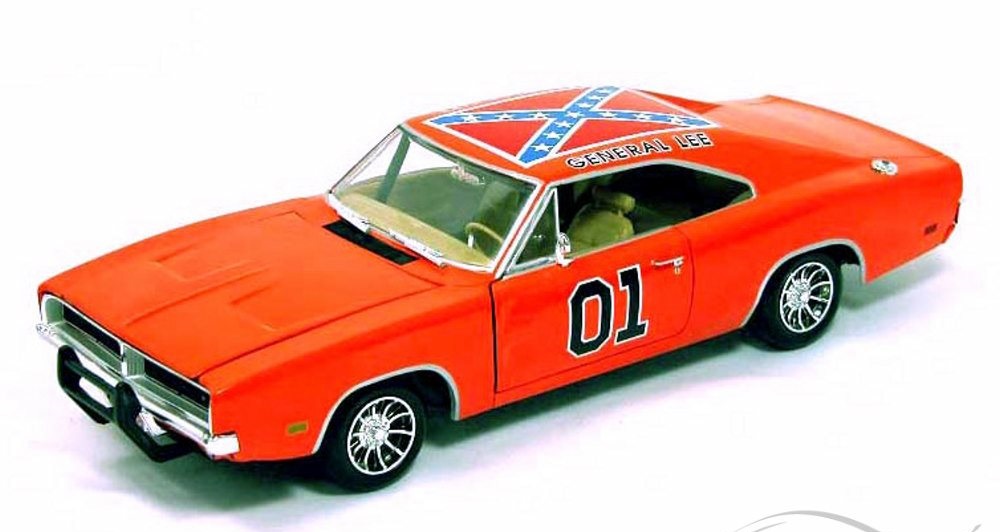 The TV show Dukes of Hazzard is fondly remembered for the toys that followed its launch. Toy companies scampered to have a piece of the Dukes toy market launching everything from watches, sneakers and walkie talkies for kids to big wheel cycles. Not to be left behind, toy maker Mego had General Lee’s 1969 Dodge Charger toy which featured in almost every kid’s list of expected Christmas presents. General Lee’s ride was a popular toy back then.

You can still get your hands on these cars today, but at a much higher price. There are several listings on EBay for the toys with different prices ranging from $400 to $600. The Boss Hogg Cadillac by Mego goes for $500, while a perfect one still in the box sells for between $2,999 and $4k. 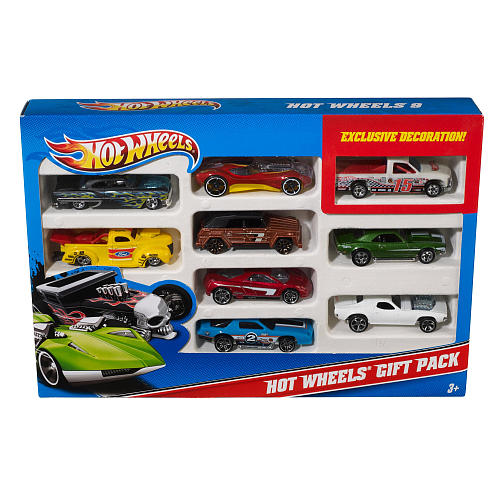 Almost everybody who was around in the 60s and 70s knows Hot Wheels. The Hot Wheels brand was released in ’68 as a fun traditional toy car. There were only 16 cars launched that year, but since then the toy car market has seen thousands of Hot Wheels in almost every imaginable design. There are even devoted Hot Wheel collectors. There are many designs still in the market, but the original funky styled toy cars are rare to find.

The worth of Hot Wheel today depends entirely on the car’s condition and how rare it is. There are other factors too, such as the color and style. For example, a Hot Wheel toy car may be worth $10, but another car of the same design but with different color goes for over $300. The early cars that came with redline tires are quite valuable. One particularly interesting case is that of the 1969 VW “Beach Bomb” toy car that is worth over $70,000. So if you still have a few Hot Wheels gathering dust in your attic, it is about time you dug them out. 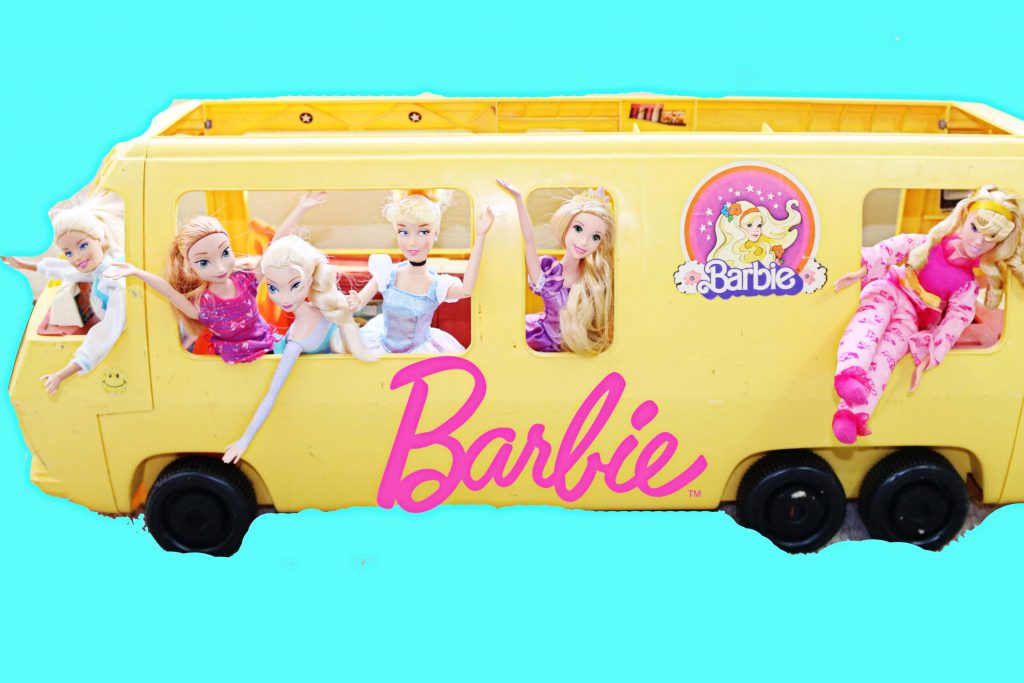 The ever popular doll, Barbie, had a dream car too. Toy maker Mattel came up with a series Corvettes with a Barbie theme design including a hip Beach Bus van. Of all the Barbie rides, the one that really stood out was the 1976 Star Traveler, which was a replica of the GMC V8 motorhome. It had all the cool features of a motorhome including a kitchen, beds, couch, shower, and a detachable sun deck.

If you feel compelled to relieve your childhood memories with one of the original Star Travelers, then be prepared to part with more than the $19.97 original price. Barbie toys are popular collector items and Star Travelers are no exception. There are few listed on EBay going for between $40 and $90, while a good one in perfect conditions plus the original box and all the accessories may be worth anywhere between $100 and $200 or even more. 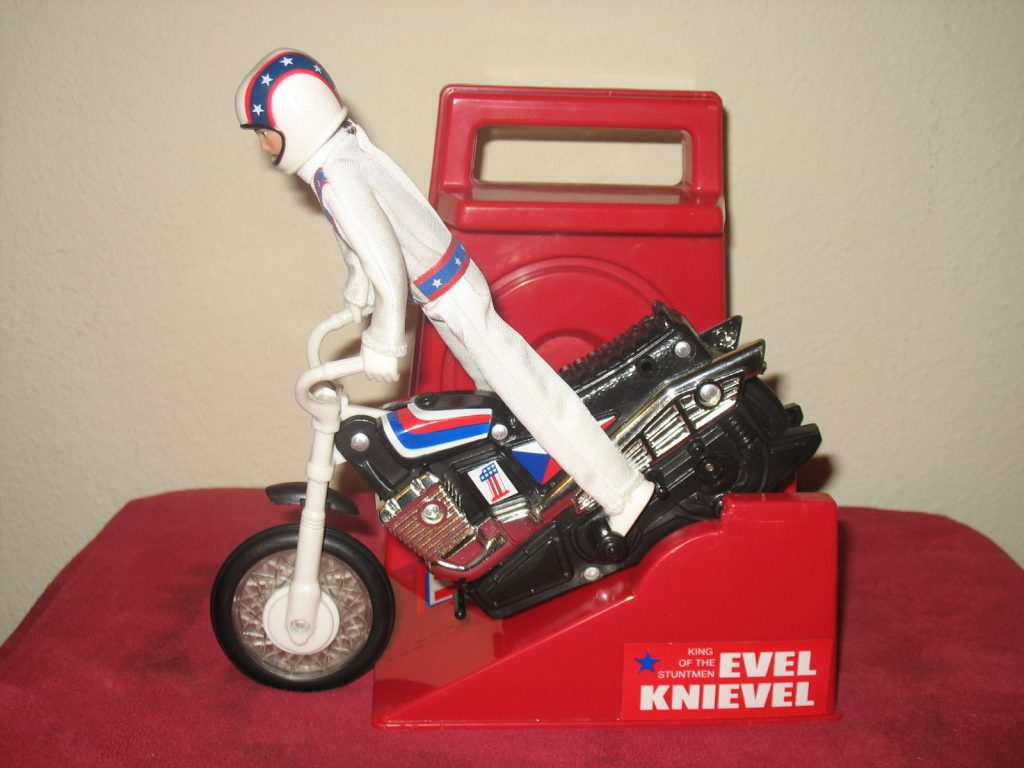 Everyone who grew up in the 1970s knows what a legend Evel Knievel was in the motorcycle stunt jumps. He is known not just for the great jumps he executed, but for the dangerous crashes he endured. From 1972 to 1977, toymaker Ideal released a series of Evel Knievel toys that became every child’s dream toy. A fine example is Evel Knievel Stunt Cycle that became so popular that it was re-launched in the late 1990s and 2000s.

The 1970s Stunt Cycle is a rare toy today, especially the model known as the Silver High. There are a few listings on EBay for Stunt Cycles like the Jumper model, going for as much as $3,000 when still sealed in the box. 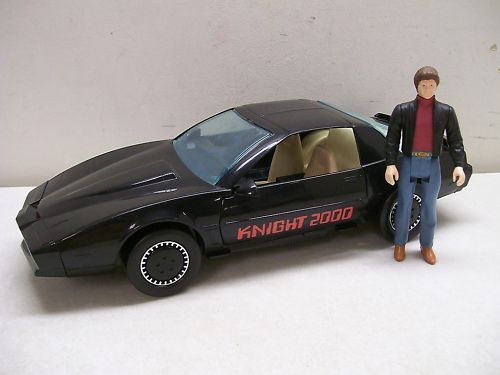 The Knight Rider TV series was quite popular between 1982 and 1986. The show featured a talking Trans Am called KITT which was an acronym for Knight Industries Two Thousand. Toys based on the theme of the show soon flooded the market, among them the Voice Car released by toymaker Kenner. The car came with an action figure of Michael Knight, the star of the show.

Toys based on the Knight Rider show are popular collector items today. There are listings of the Voice Car on EBay going around $50 to $60. A perfect Voice Car still sealed in its box today goes for up to $900.

Also known as an FX slot car, the car was themed around racing cars that were quite popular in the 1960s and ‘70s. Toy race cars were made by many companies including Aurora factory Experimental (A/FX). Electrical race car sets came with plastic tracks and could even fly off the track. They were every kid’s dream toy back then.

In the 70s, an AFX slot car set cost less than $40, but today you would pay much more than that. Rare models of AFX slot car sets go for more than $100. There is even a listing on EBay for one still sealed in its box being sold for $850. 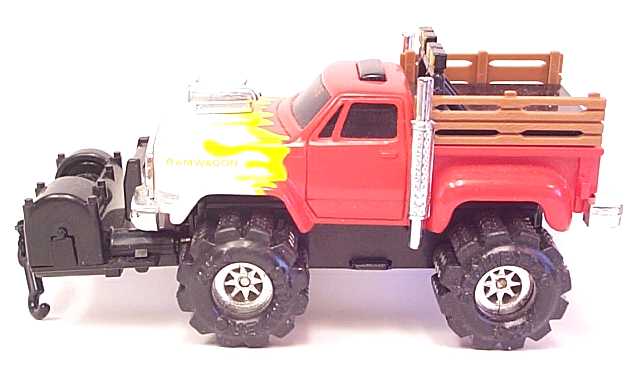 Stomper 4x4s were released by toymaker Schaper back in 1980. They targeted kids who loved the off-road driving craze that dominated the early ‘80s. The toy car was powered by one AA size battery and only cost $10. They had very impressive features such as headlights that really worked. They came in different models including Subaru, Jeep Honcho, and Dodge Power Wagons among others.

It is hard to find a Stomper in good working conditions today, probably because the kids back then played with the toys outside in dirt and rough surfaces. Stompers listed on EBay go for between $10 and $100. A Stomper still sealed in its box will cost a few hundred dollars.