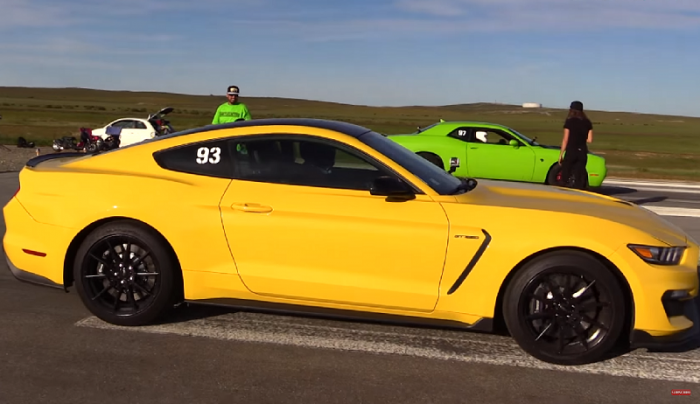 What happens when you pit a new Dodge Hellcat and Shelby GT350 in a drag race?  With a horsepower difference of 200 horsepower, drag race fans would say that such a contest is not fair.  However, nobody ever said life was fair, especially when drag racing is concerned.

In the outside lane, we have a 2016 Dodge Challenger Hellcat with a supercharged 6.2 liter Hemi motor.  This beast puts out 707 horsepower and 650 lb-ft of torque.  In documentation from the factory, the Hellcat does a sprint from 0 to 60 miles per hour in the low three seconds and the quarter mile in 10.8 seconds. 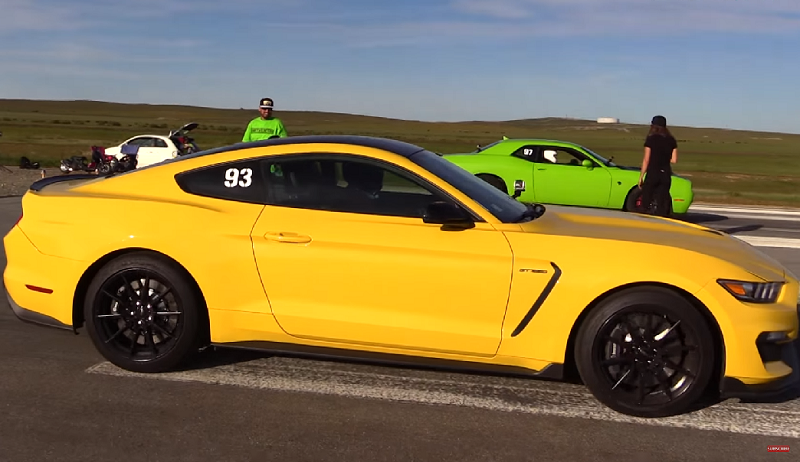 In the inside lane, we have a 2016 Ford Shelby GT350 Mustang with a 5.2 liter flat plane crank V8 engine producing 526 horsepower and 429 lb-ft of torque.  While Ford doesn’t make official claims on 0-60 times, “estimates” have been put forth of less than 4 seconds.  Quarter mile drag times of 10.8 seconds can also be found online.

Now, back to the race at hand…

With such a power difference between vehicles, I would expect the more powerful car to completely humiliate the less powerful vehicle.  Does that really happen?

In watching the video, it looks like the Hellcat pilot is short-shifting.  Perhaps he is trying to avoid wheel-spin and the myth that the Hellcat is overpowered.  However, his straight-line performance does not seem to make sense.

There is that glorious noise of screaming large displacement V8s.  This in and of itself makes who won the final race a moot point.

After watching the video, I realized that American muscle power is back in a big way and that car buyers and car fans are indeed, the winners.  Now, to see who won the race and by how much, you can hit “play” below.  I would also tell you to turn your speakers on full, if you love the sound of roaring American iron.