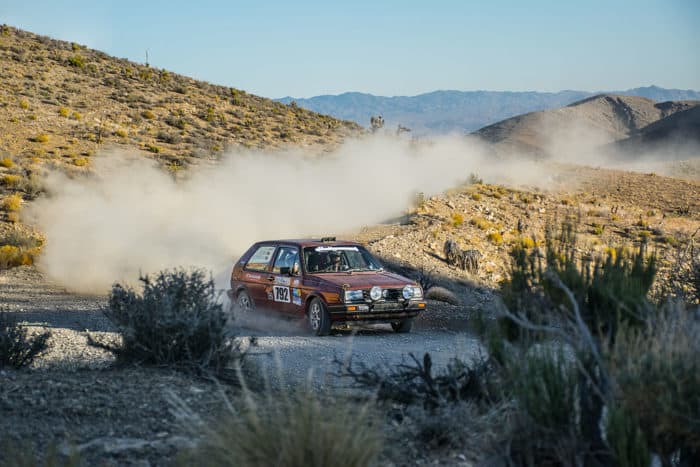 Rally racing is popular across much of the world. Major events like the World Rally Championship are televised in Europe, Asia, and South America. In these regions, top drivers like Henri Toivonen, Hannu Mikkola, and Michèle Mouton became household names, at least among gear heads. But in the U.S., not so much. Rally racing in America today can be compared to soccer 30 years ago: a global phenomenon that has only a cult following here.

But why? Rallying offers many of the elements seemingly beloved of American motorsports fans: heavily-modded cars festooned with colorful sponsor logos engaged in wild, fish-tailing racing punctuated by jaw-dropping wrecks.

We took a look at where rally stands in the U.S., and where it might be headed.

Rally is debatably the original motorsport, in that the very earliest motor races resembled it in format. Though the “rally’ name wasn’t applied until the Monte Carlo Rally of 1911, the first such event was the 1894 Paris-Rouen Horseless Carriage Competition. Most early rally races were in Europe. But some similar contests were held stateside. One was the epic 1909 New York-Seattle race.

Rallying takes place on closed-off public or private roads using modified production cars or specially-built street-legal vehicles. Rallies don’t run on a circuit. Instead, they comprise a point-to-point format. Drivers and co-drivers/navigators race between set control points, against the clock. The most dramatic rallying takes place on dirt tracks winding through forests, deserts, mountains, and snowscapes. 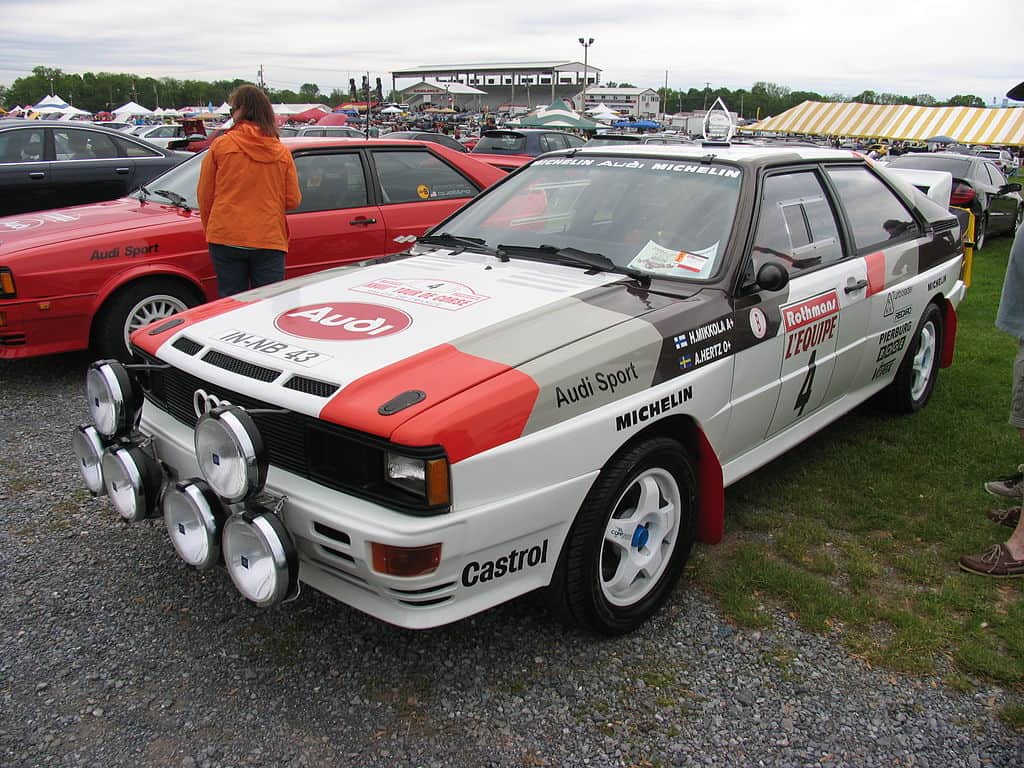 Part of the traditional allure of rallying has been its use of production cars. This meant that fans could go out and buy the very models driven by their favorite rally drivers. Rallying brought cars like the Audi Quattro – as driven by the aforementioned Mikkola and Mouton – to the public’s attention in spectacular fashion. Otherwise obscure models like the Lancia Stratos became posters on suburban garage walls due to their rallying performances.

Major rally races divide cars into classes according to their specifications. Over the years, this has given even modest models like the Mini, Vauxhall Chevette, and the two-stroke Saab 96 the chance for glory. 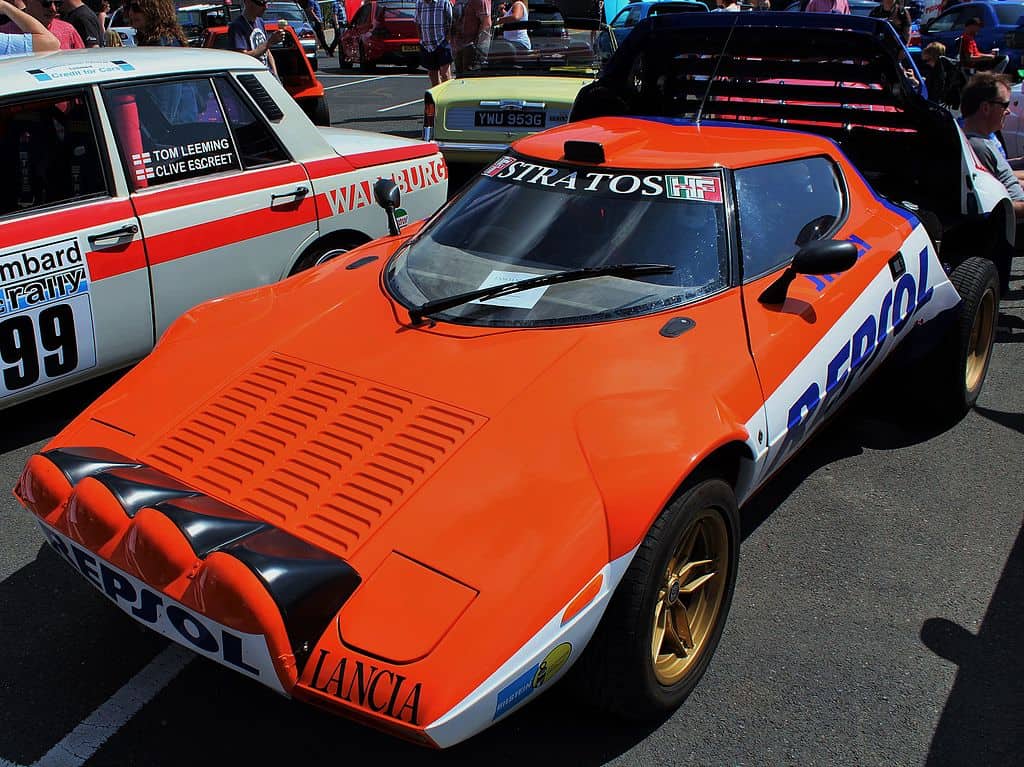 Many fans regard the heyday of rallying to be its short-lived Group B regulations, introduced in 1982. These allowed for some of the sport’s fastest and most powerful cars. Divided into four classes based on engine displacement, prominent Group B rally cars included the Audi Quattro S1, Lancia 037, Peugeot 205 T16, and Renault 5 Turbo.

But the sheer speed of these vehicles, combined with sometimes inadequate crowd control along remote rally routes, lead to tragic accidents. Toivonen and his co-driver Sergio Cresto were both killed when their 600-horsepower Lancia Delta S4 crashed and burned during the 1986 Tour de Corse rally. That same year, 31 spectators were injured and three killed when Joaquim Santos lost control of his Ford RS200 during the Portuguese Rally. Group B effectively died that day, too. It was canceled at the end of 1986. 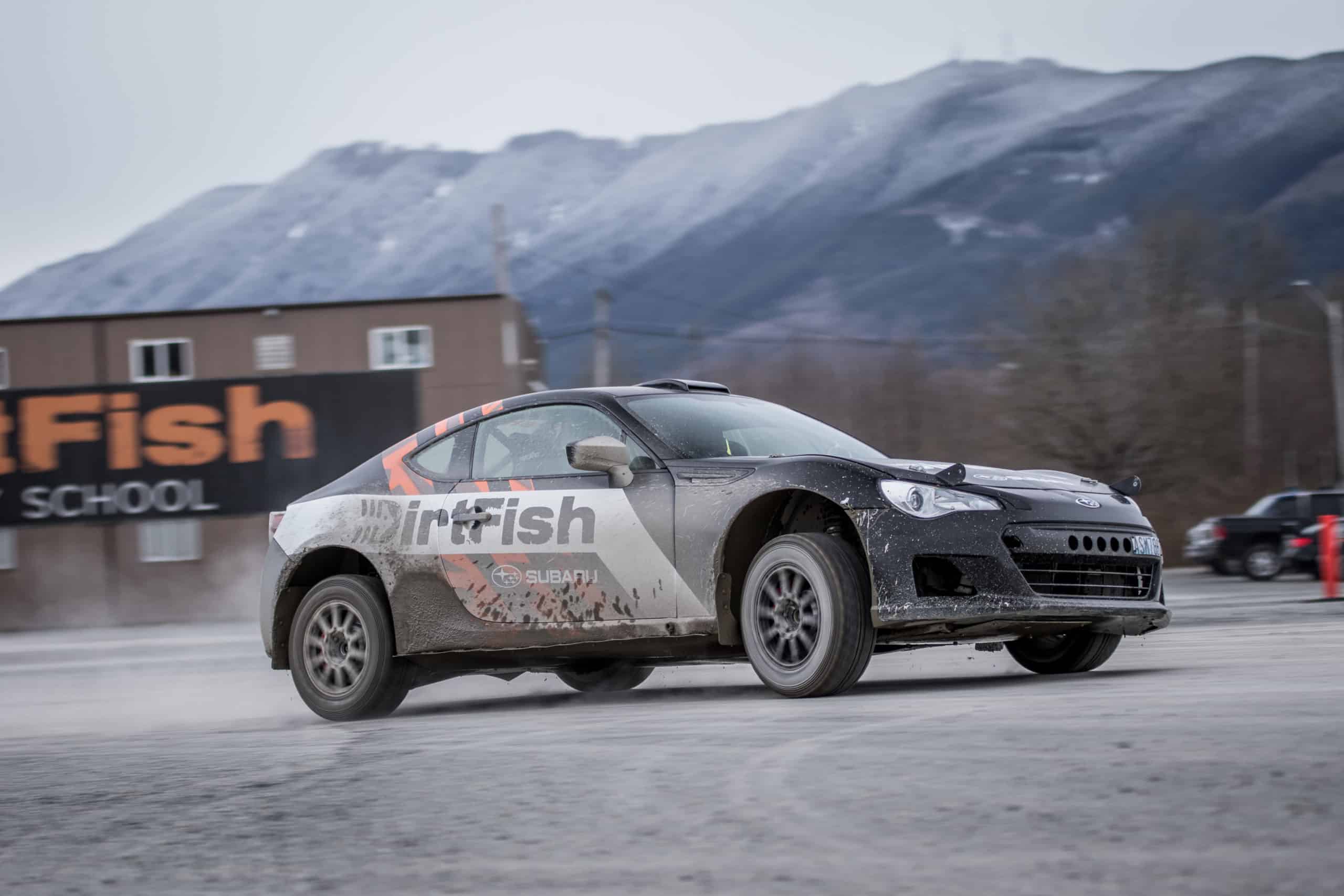 Rally racing also spurred the development and proliferation of automotive technologies which are today mainstream and taken for granted.

“Because rallying occurs on real roads of every conceivable terrain, the sport is often used as a way for manufacturers to prove the strength and durability of their vehicle,” explained Nate Tennis, a rally driver and Lead Instructor at DirtFish Rally School in Snoqualmie, Wash. “Also, since rallies often happen on loose surfaces (gravel, snow, etc.), rally was the reason for the creation of AWD in standard production cars, as well as accelerating the progress of turbo-charging and many other innovations in regular road-going passenger cars.”

Until recently, manufacturers were required to make the parts they used in their rally cars available to the public. This homologation impacted the cars seen on public roads everywhere.

“These ‘homologation specials’ brought many of the exciting cars to the world,” said Tennis. “Such as the Subaru STI, Mitsubishi Lancer Evolution, Audi Quattro, etc…”

But today’s top-spec rally cars bear only a cosmetic similarity to anything you’ll see on the streets.  This is because, with the cost of producing special models for rallying proving prohibitive, the major rally organizations relaxed their rules. Automakers no longer have to produce their rally racing models in large numbers for public sale. They just have to bear a visual similarity to their road-going counterparts.

“This provides an opportunity for the manufacturer to be competitive with a vehicle that they may not have in their lineup, and therefore ensure more brands/competitors in the sport,” Tennis explained. “While purists may say that this reduces the number of cool cars available in showrooms, the reality of top-level rallying disappearing due to manufacturers pulling out is far worse.” 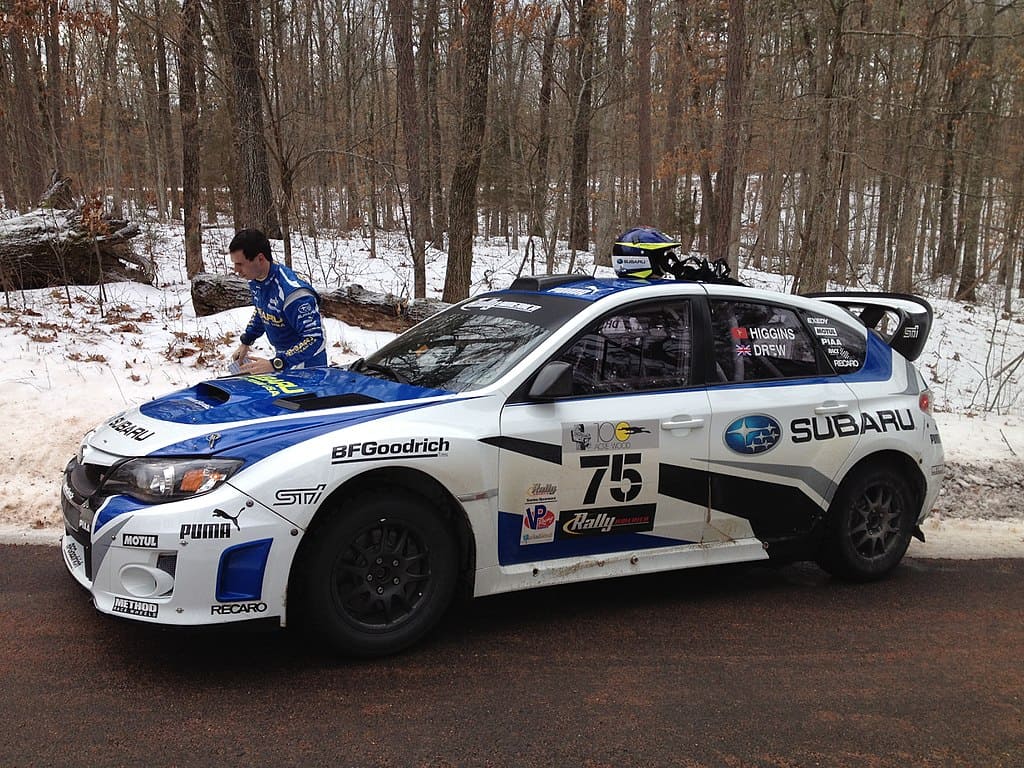 Rally Events in the USA

The World Rally Championship (WRC) has sanctioned events in the U.S., but not for over 30 years. The Olympus Rally in Washington state was a WRC event from 1986 to 1988. But currently, America isn’t even on the shortlist of countries aiming to join rallying’s top series.

“Rallying has largely been a curiosity in the US over the years, with random spikes of popularity,” said Tennis. “But with the advent of online production capabilities the rally world is accessible to anyone, and the limitations the sport has seen in the past are dwindling.”

There was a national championship of rallying events in the U.S. called Rally America. Starting in 2005, it was dominated by Subarus and included titles for American drivers Travis Pastrana (2006-2009) and Dave Brown (2018). But Rally America ended in 2018. Interest from manufacturers was still lukewarm. In Rally America’s final season, Rally Wyoming was twice canceled due to a lack of participation.

Founded in 2016, the American Rally Association (ARA) is today the only stage rally sanctioning body in the U.S. with a National Championship trophy. Pastrana was ARA champ in 2017, with David Higgins claiming the title in 2019.

Over the years there have been American drivers in WRC events around the world. These include John Buffum, the most successful U.S. rally driver. Buffum competed in at least one WRC event in every decade from the 1960s through the 2000s. But American WRC drivers remain a rarity.

Nonetheless, some contemporary American rally drivers command huge online followings. Pastrana, who recorded a 5th-place finish in the P-WRC class in the 2007 21º Corona Rally México, is one. Another is Ken Block, who has finished as high as 7th place in WRC events. Both men are well known for their success in a variety of action sports.

With such celebrity drivers leading the charge, it seems that America – the world’s biggest economy and its largest car market – is ripe for a rallying resurgence. Yet the culture of rally racing is still obscure and befuddling to most Americans. 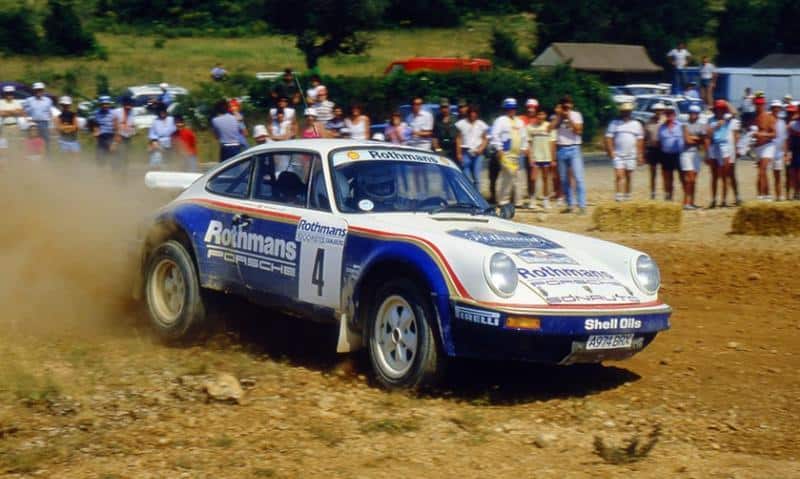 “Rallying has a large, colorful history outside the US, so it is more ingrained in other cultures and understood,” said Tennis. “Think of the popularity of rallying in the US as similar to soccer; it’s a sport that is incredibly popular all over the world, yet we only recently developed professional soccer teams who compete in a national championship.”

U.S. motorsports culture centers around watching car-versus-car events in audience-friendly, easily-accessible venues. Rallying often happens in remote locations not designed for crowds, with vehicles racing against the clock rather than directly against each other.

“The rules and reasons for how rallies work can often be confusing, which adds another layer of complexity that can be off-putting,” said Tennis. “And it’s been hard to find. When it was on TV, it was extremely popular, with manufacturers campaigning the national championship and sponsors incentivizing competition. When that went away, so did the big teams and potential growth.”

The Future of Rallying in America

The future of rallying stateside will depend upon raising awareness of the sport here. This means educating not only existing motorsport fans, but also Americans who’ve perhaps been put off auto racing by the domestic dominance of NASCAR.

“Along with [online production capabilities] comes a generation of enthusiasts looking for a sport that doesn’t follow the typical American racing path (ahem, repeatedly turning left),” offered Tennis. “So rallying becomes appealing to an audience that may not have been interested in motorsports.”

Just as we’ve seen with soccer in the U.S., rallying faces the vicious-circle challenge of growing the sport to a point where big-money sponsors want to get involved, while lacking that very money with which to grow. But Tennis remains optimistic.

“As more people are aware of the sport and can follow it, the popularity grows, brands find unique advertising opportunities, and the snowball escalates,” he continued. “All signs point to this happening for rallying in the U.S.”

Where to Watch Rally Racing in America

The lack of rallying coverage by the mainstream American media has left motorsport fans here in the dark. They’re largely unaware of individual rally events and lack an understanding of how these work.

DirtFish is aiming to counter this with its newly-created DirtFish Media. A digital media company devoted to the world of rallying. Initially focusing on the WRC and ARA, DirtFish Media intends to gradually encompass more regions and rallying offshoots, such as rallycross.

“Rally is set to explode in this country, with a base of enthusiasts looking for an exciting sport that is more diverse and adventurous than any other (car-based) motorsport,” Tennis concluded. “It is accessible and identifiable to fans in the fact that the cars resemble something that they can actually attain, and the action-sports stars they worship often find a regular seat in the top rally cars in the U.S.” 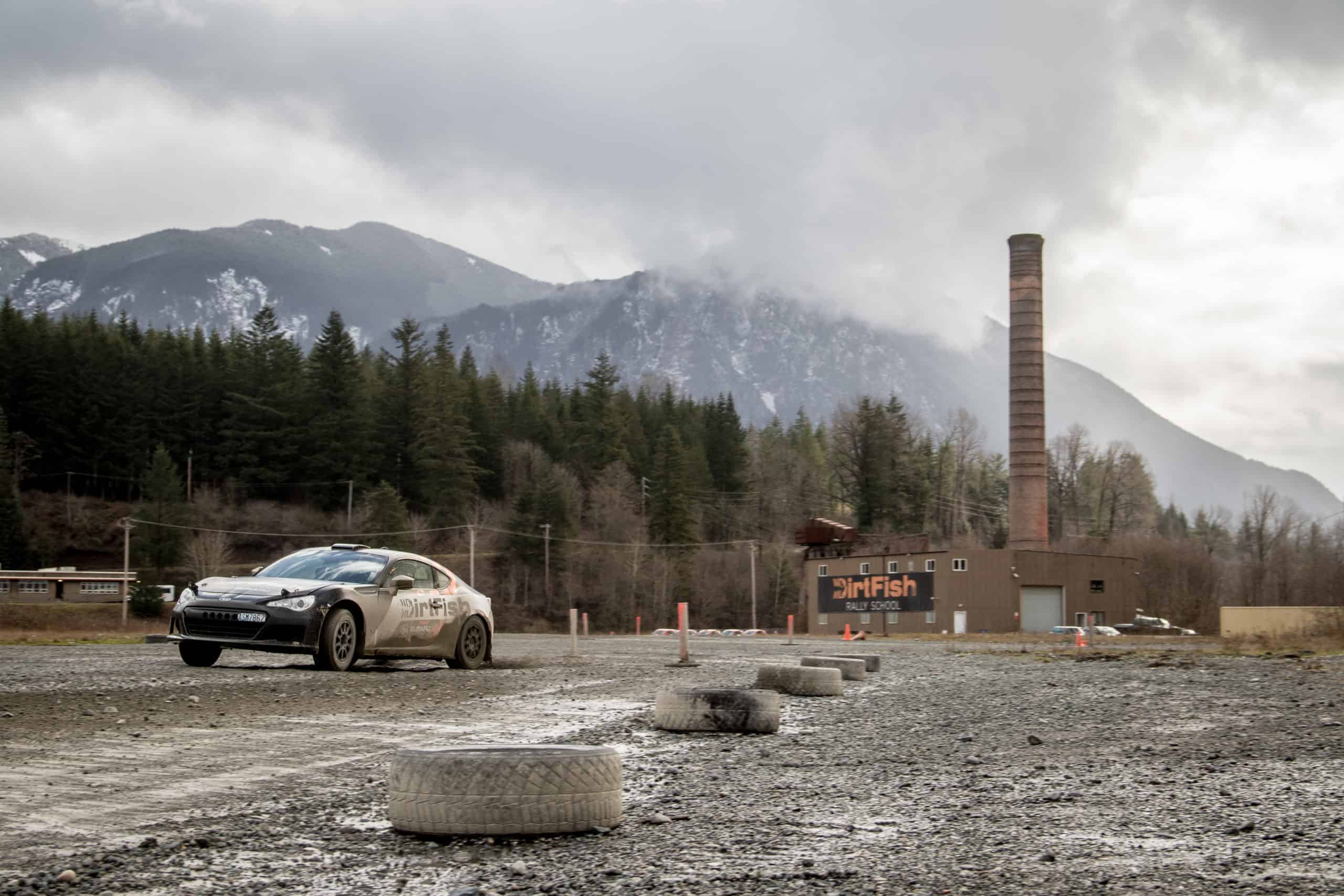