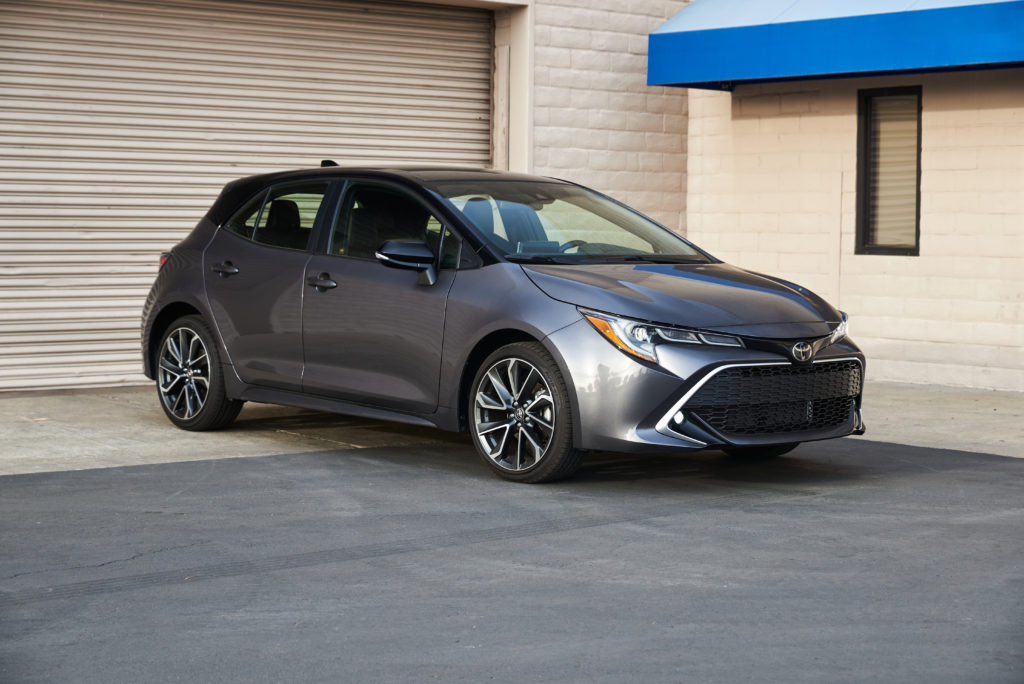 What I thought would just be a city car, the 2021 Toyota Corolla XSE Hatchback, pleasantly surprised me in the 300+ miles I spent behind the wheel. It seems Toyota cares about more than just reliability. Good looks, adequate power, Apple Carplay, and a car that’s easy to park but big enough to sleep in. What more could you ask for?

The 2021 Corolla Hatchback comes in two trims, base SE and the higher end XSE. Both have a 2.0L 4-cylinder and are available with an automatic (CVT) or manual (6-speed) transmission. I spent a week with a manual Corolla XSE Hatchback, which has an MSRP just north of $25,000. 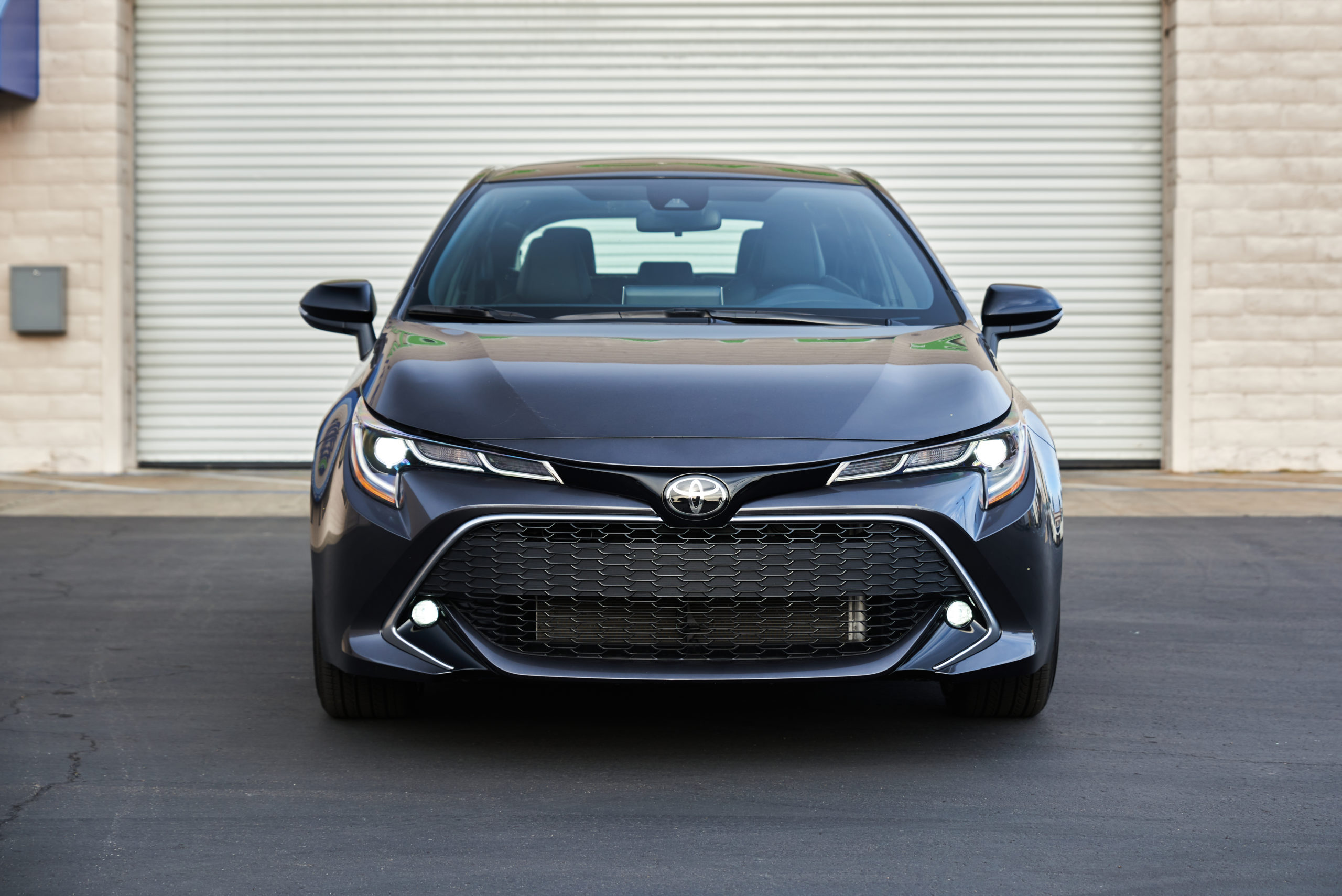 As a city car to run errands, it’s great. Easy to maneuver and park, plus if you go for the 6-speed manual the clutch is fairly light, which makes driving in traffic easy enough.

I never thought I’d be writing about a Corolla in the mindset of it being an enthusiast car but I can honestly say that I enjoyed the driving experience. The car really enjoys being revved up to redline, it grips surprisingly well in corners, and the steering weight isn’t too light, as I find to be the case often in commuter cars. If you drive it like a sports car you’ll be impressed with its capability, but a sense of drama and emotion is lacking. The intake is all you’ll hear. The exhaust is quiet as a mouse from inside the cabin, even at redline. 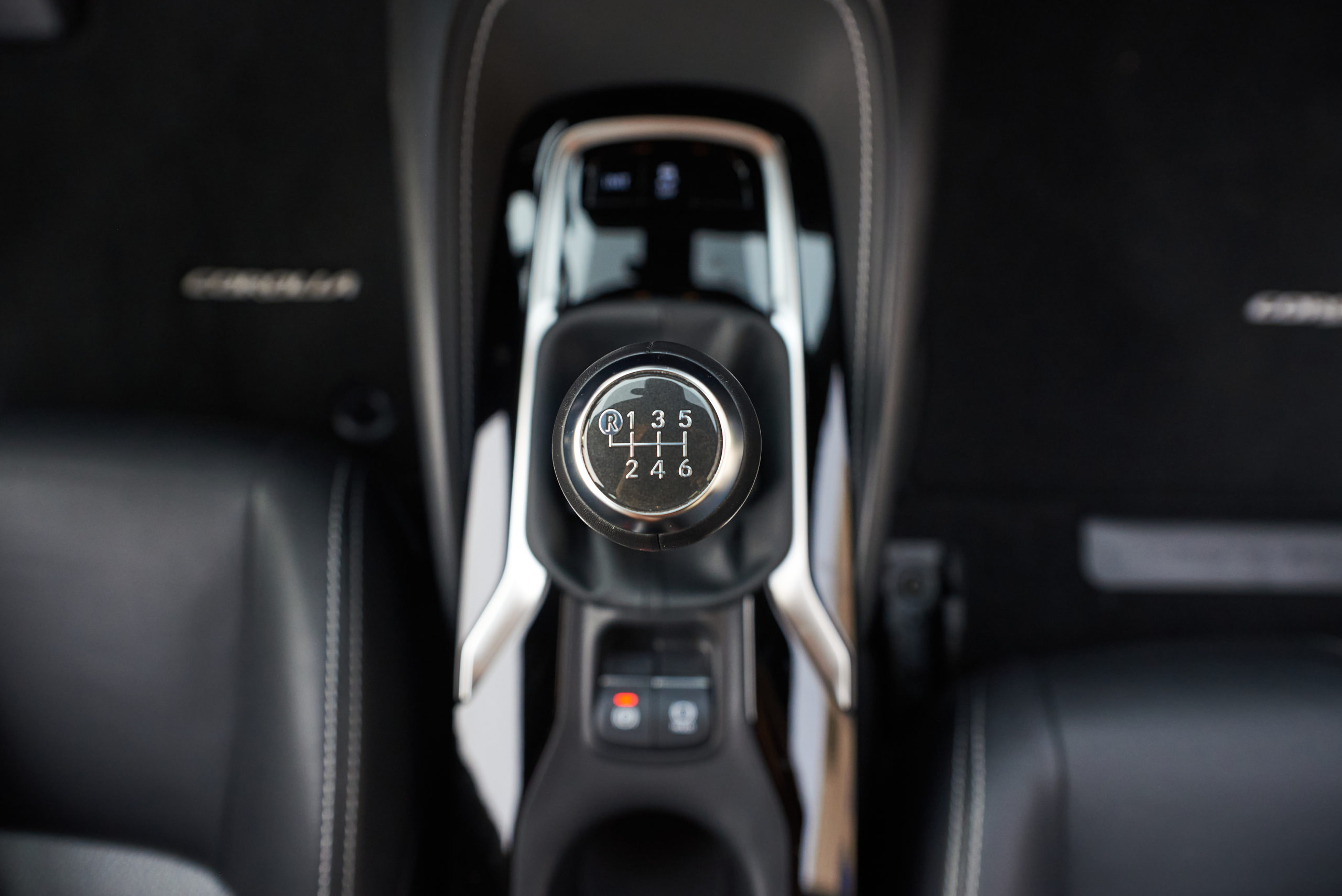 Tapping the “iMT” button in front of the shifter is essentially “sport” mode for the 6-speed version. It enables auto rev-matching for downshifts, which makes every gear change feel perfect, no matter your performance driving skills. My biggest gripe with the manual transmission is the grip on the shifter. The stick is too tall to be comfortable, so my hand felt like a crane grabbing from the top rather than from the side.

If you have a large water bottle in the cupholder which is behind the shift knob you’ll be sure to scrape your forearm against the bottle on every shift. To offset this, I stopped using the cupholder and put my bottle in the door storage compartment on each drive.

Radar cruise control is extremely nice to have and works well. Unfortunately, the lane tracing assist is lacking and is a reactive system saving you from departing the lane rather than really steering for you. Brake-hold is nice to have and it automatically sets the electronic parking brake for you whenever shutting off the engine.

Naturally Aspirated: A Rarity in Its Class 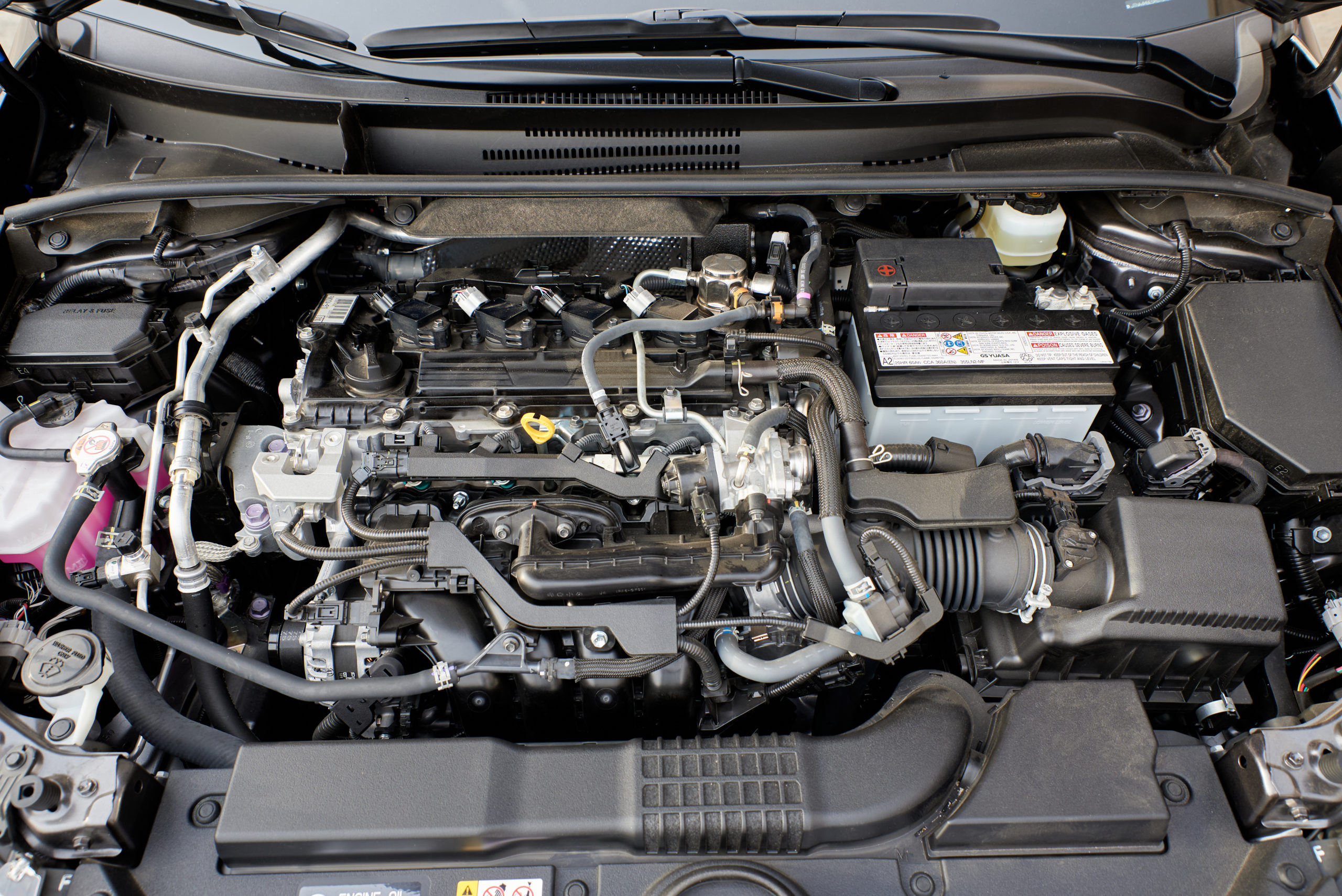 The 2021 Corolla XSE Hatchback’s 2.0-liter naturally aspirated (NA) engine has benefits beyond reliability. A naturally aspirated engine lets you rev out the car to give you slow car fast sensations, similar to the feeling of a Mazda Miata, in which you can hit the top of 3rd gear without getting in trouble with the law. Rev the Corolla up to 6,600rpm to reach the peak of 168 hp. Let off the throttle and you won’t be met with “rev-hang,” a very common occurrence in small turbocharged engines like Honda’s 1.5-liter turbo in the 2021 Civic Hatch.

Getting off the line is still fun with the Corolla’s 151 lb.-ft. of torque being able to spin its front tires through 2nd gear. The top of the torque curve is reached at 4,800 rpm. The engine lets you have fun revving out the gears and has fewer moving parts so it should last longer than the turbocharged competition. An advertised 32.5 mpg combined fuel economy rating is pretty impressive as well. Over my 350 miles of testing, I averaged 34 mpg.

Sharp Looks Inside & Out 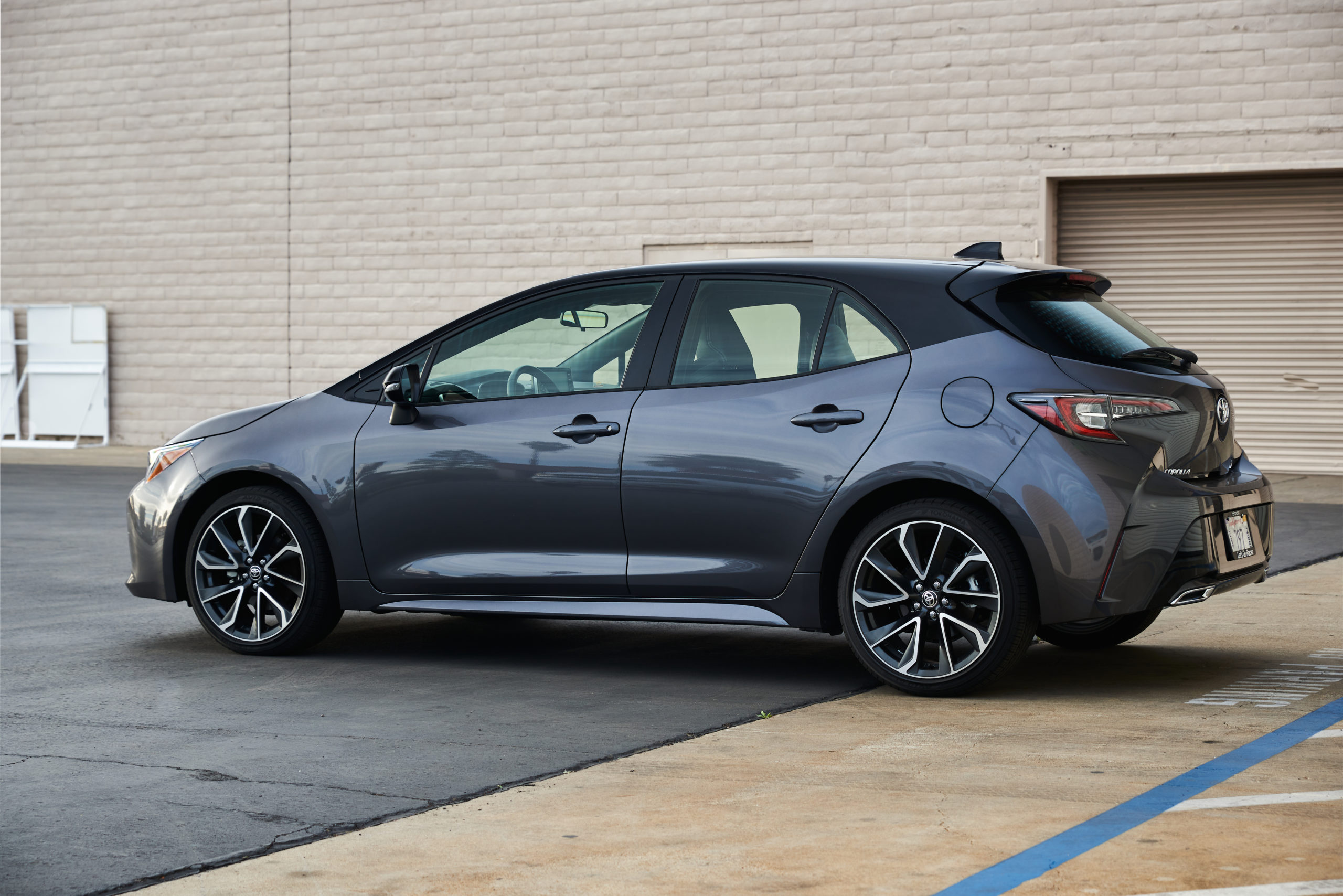 Without a doubt, the Corolla looks great to me. I am a sucker for hatchbacks. The front end looks just like the sedan version, very underwhelming with a basic yet elegant design. The rear 3/4 shows some aggressive angles in the taillights and rear fascia. The spoiler on top of the hatch is a sleek touch.

Inside the black and gray two-tone works well and flows throughout the car. Silver and black continues on to the screen and radio controls. Even the dashboard stitching matches the two-tone of the seats. 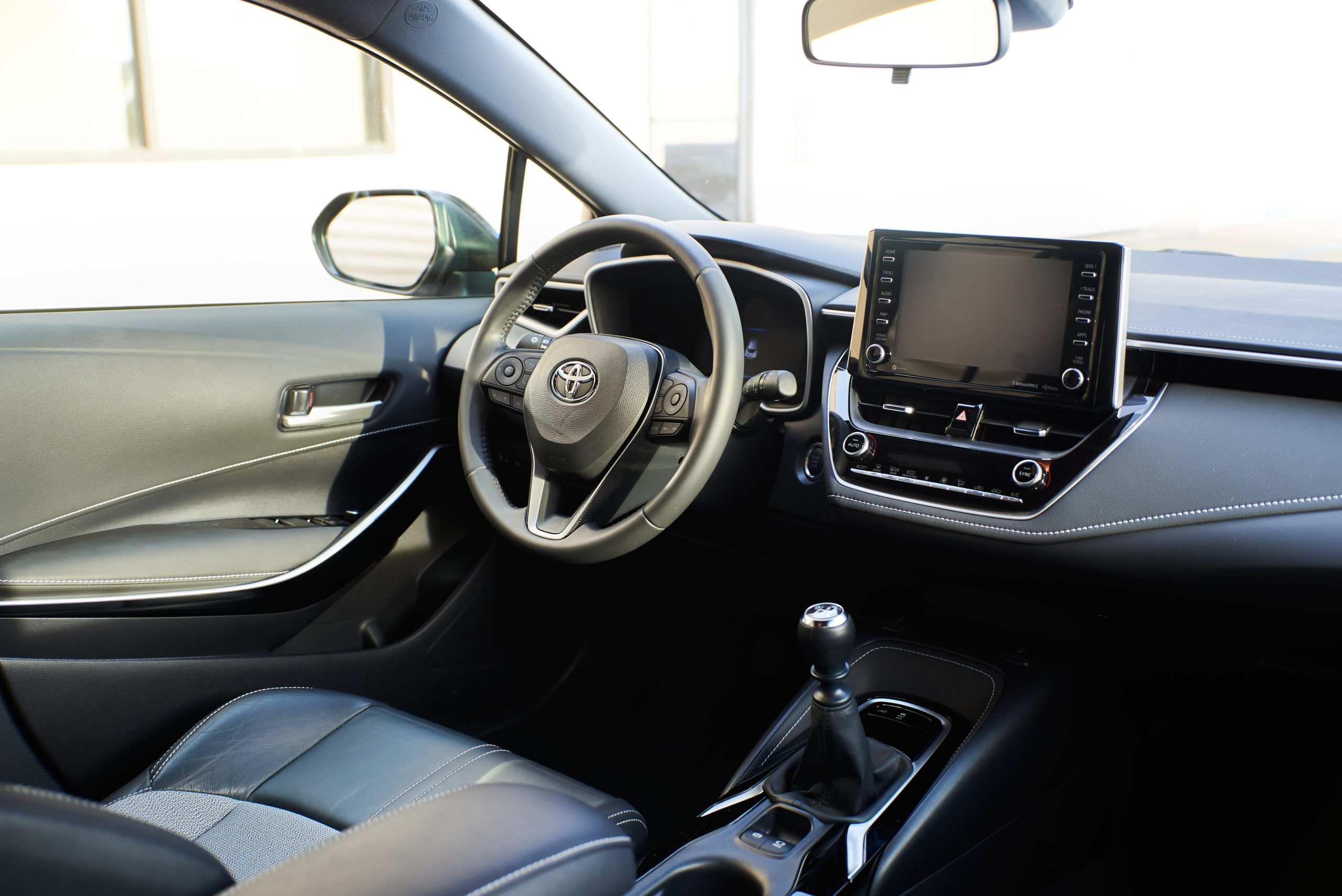 Speaking of seats, there is just enough space inside to fit four adults and squeeze in a fifth if you need. Although the base Corolla Hatch has the same shape, I really like the 18-inch alloys on the XSE, which are wrapped in P225/40R18 Yokohama Avid GT tires. 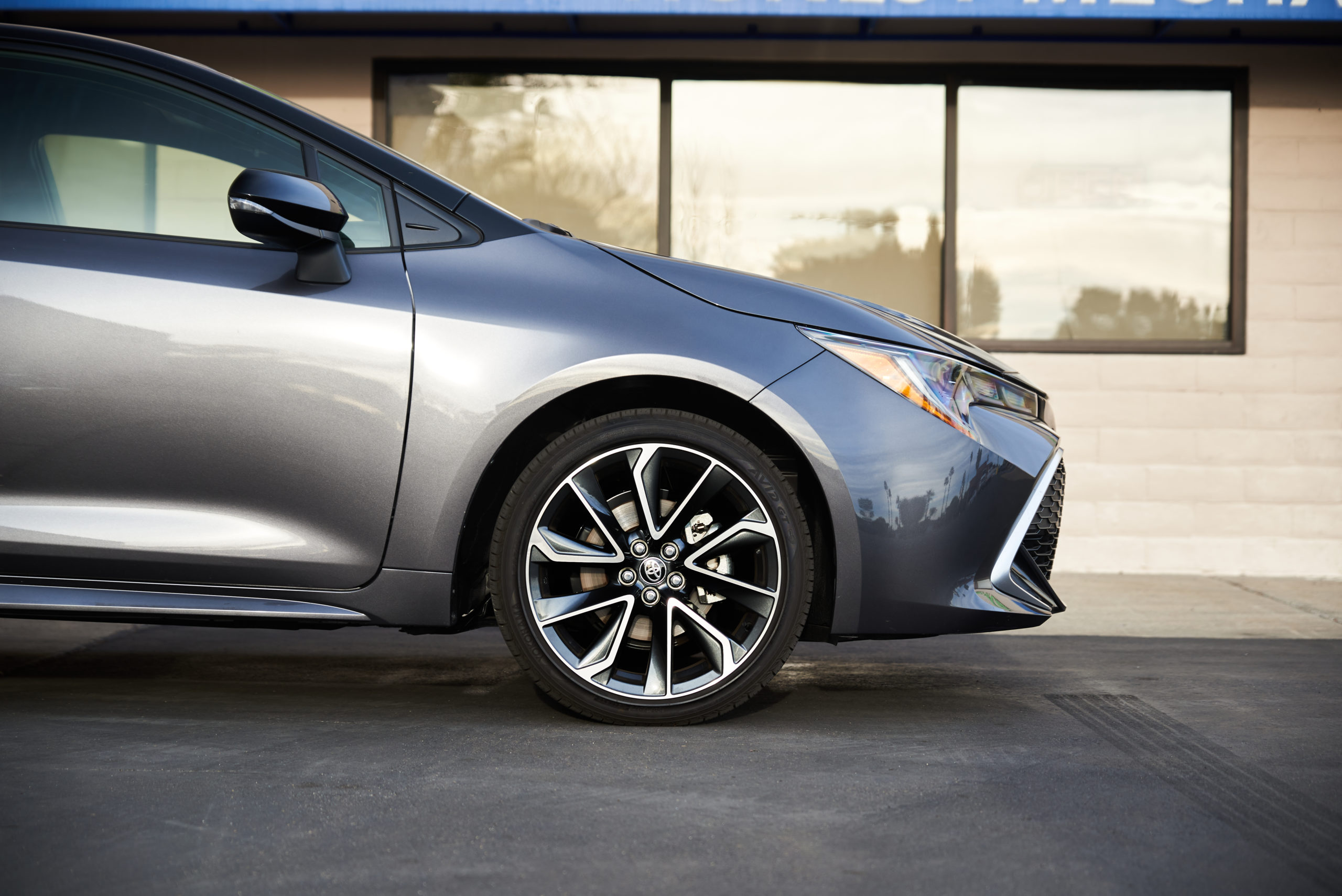 Hatchbacks are made for utility and a key feature is having a large trunk. Although the Corolla can fit 4 carry-on bags easily, the trunk is smaller than expected. Some of the width is taken up by the rear wheel wells, making the usable trunk space much narrower than the car. Of course, you always have the option of folding the rear seats and getting tons more cargo space, when you don’t have backseat passengers. 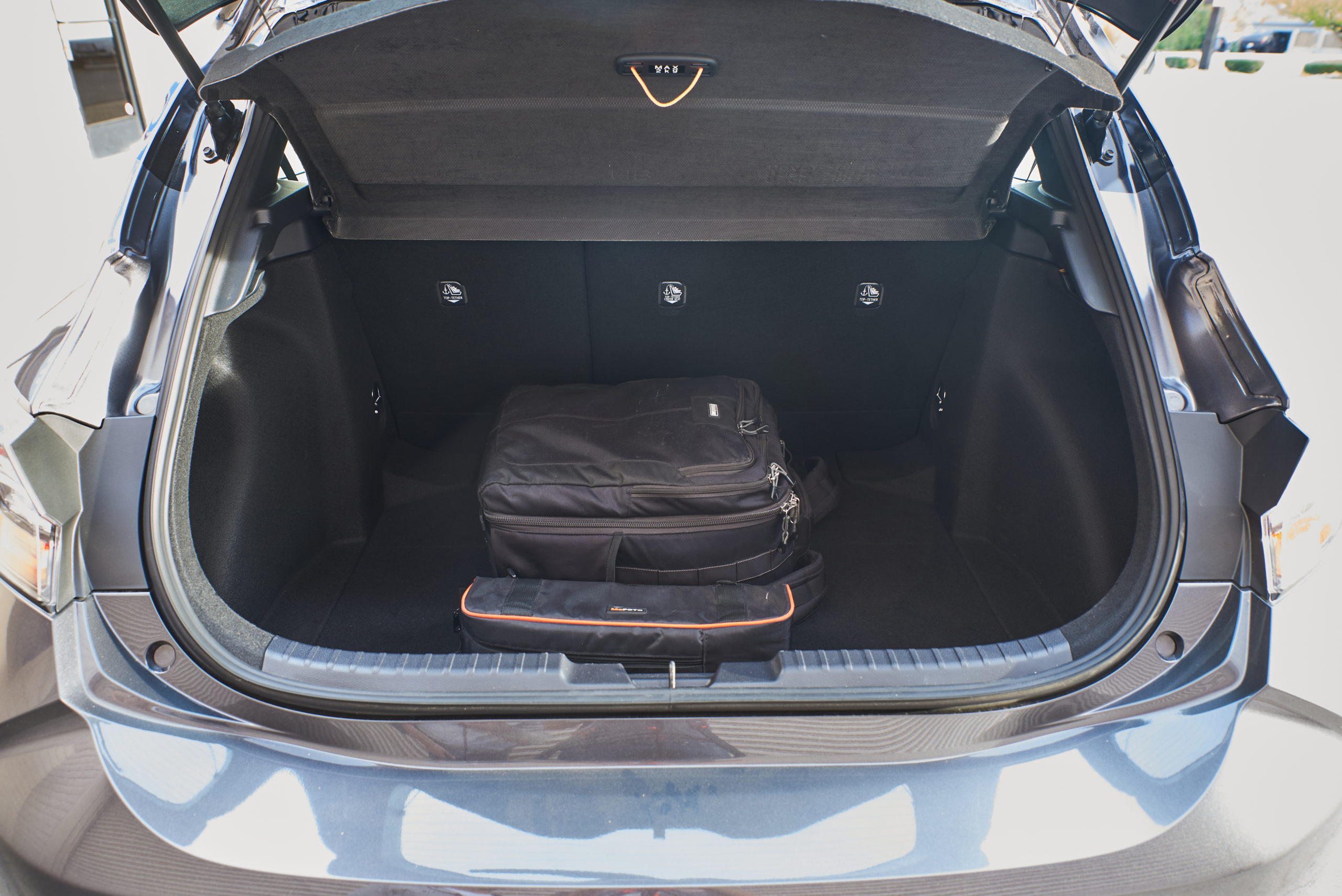 Also, if you’re doing a solo road trip and under 6-feet tall, leave the tent at home. Just fold the rear seats flat, put down a pillow and you could easily sleep in the car. A small caveat with the trunk is the lack of a trunk release button inside the car or on the key fob. The only way to open the trunk is by pushing the button on the bottom of the hatch itself. Being that it’s a hatch, the NHTSA refers to the hatch as a fifth door, rather than a trunk, so it doesn’t even have the internal emergency trunk release found in all sedans. 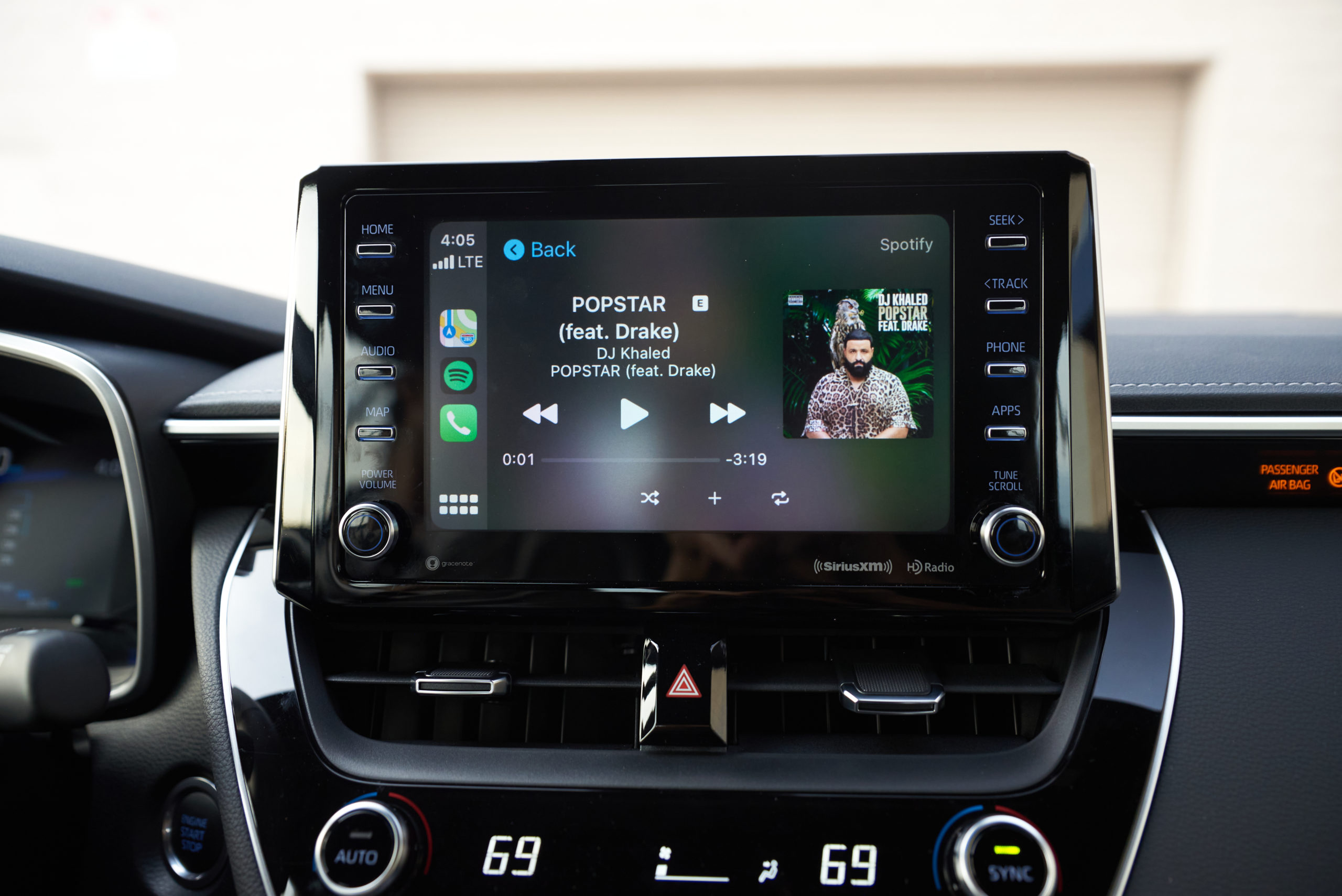 Bluetooth streaming and the radio work well in the Corolla. Plugging in your phone steps it up with included Apple CarPlay and Android Auto. One caveat however is the USB port positioning for using AndroidAuto or Carplay. The port is on the bottom side of the dash tucked away. The cubby in front of the shifter next to the port is too small to fit a modern phone. There is a USB port in the center console cubby below the armrest. However, that port only works for charging and is rated at less than 3 amps. A typical USB port on a computer is 5 amps. It would be much nicer to have the phone and cable out of sight and out of mind, isn’t that what phone mirroring systems are all about? 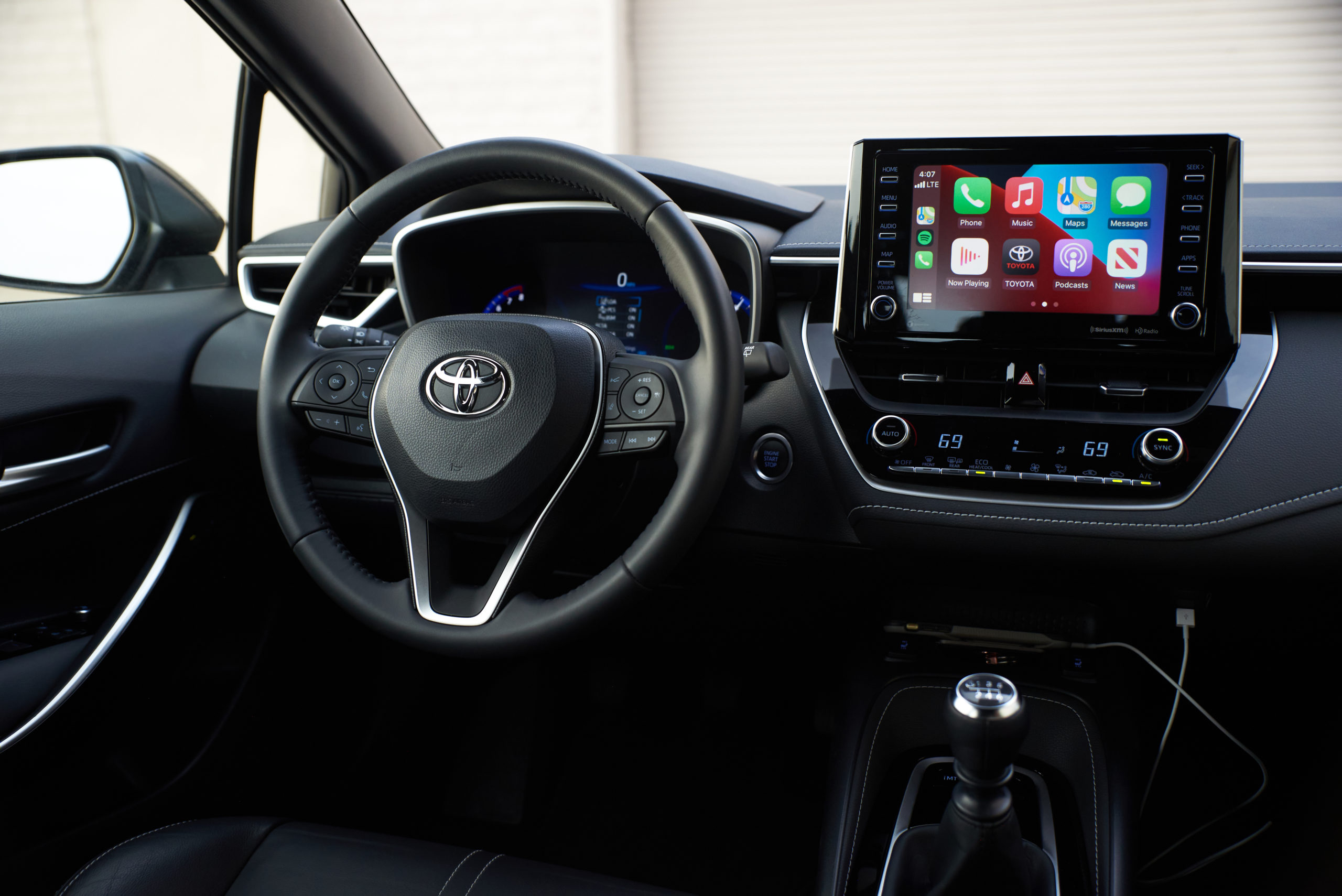 Design-wise, the display which Toyota uses in many of its models does look like an iPad for toddlers mounted onto the dash. Hard buttons on the side for easy shortcuts to maps and audio settings are nice but seldom used. A button-free bezel along the screen would really modernize the interior. It already feels like the steering wheel has enough buttons to keep your hands full. 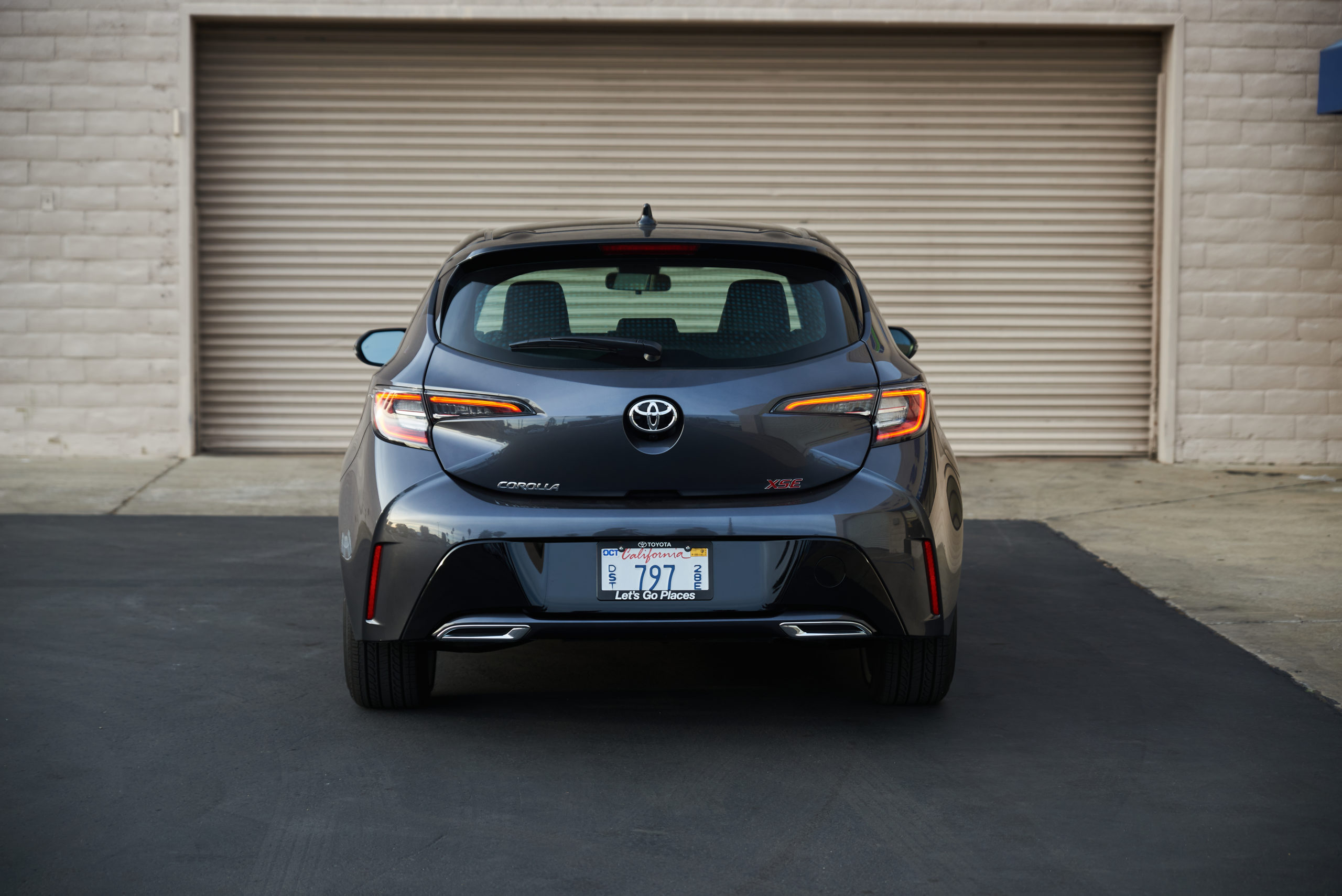 Here are some quick numbers to think about. The 13.2-gallon fuel tank can get you over 400-miles of range, with the EPA certified 32.5 mpg average. I was able to get 34 mpg with mostly highway driving in testing. That’s almost 450-miles on a tank, making the Corolla great for interstate road trips.

Some of the competition is now requiring premium fuel, whereas the Corolla runs on regular. 87-octane fuel is roughly 25 cents cheaper per gallon than 91 oct, currently in the LA area. The Corolla would use roughly 387-gallons a year for 12,000-miles of driving. Taking a look at Honda’s specs page for the Civic Hatchback shows that the 2021 Civic Hatch Sport requires premium fuel, and it gets a very similar 32 mpg. The savings in gas between the two would be about $96 a year. Not a huge sum in the scheme of things, but something to think about.

If you want truly impressive fuel economy, the Corolla Hybrid is always an option, with a combined 52.5 mpg, but is only available in sedan form. 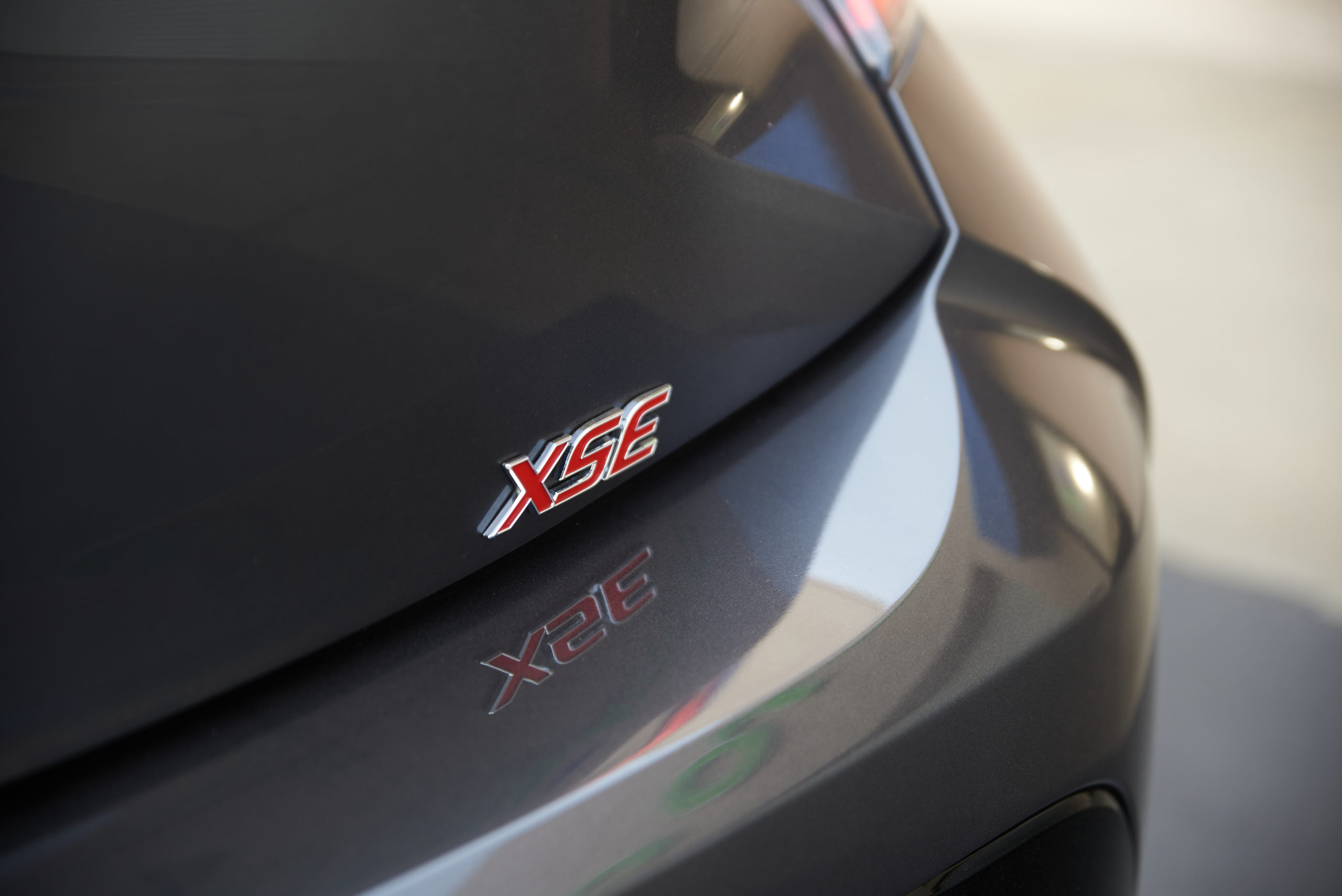