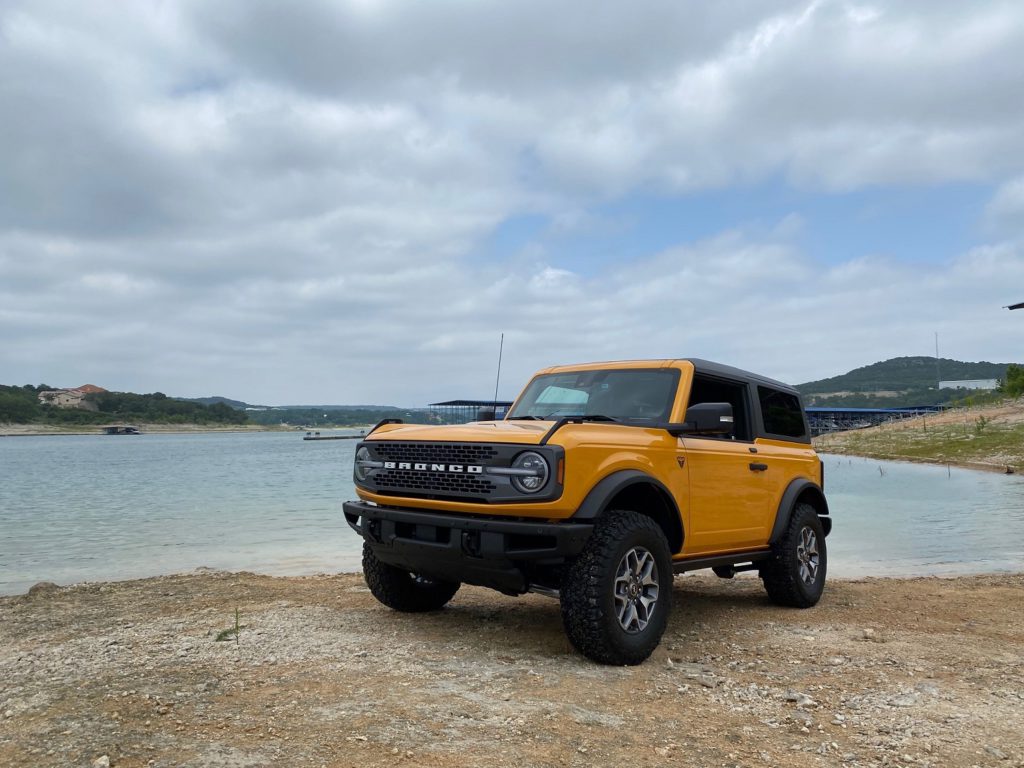 Twenty-five years after it was pushed out of the Blue Oval’s SUV lineup, the 2021 Ford Bronco is back, and it’s not messing around. Formerly only available as a two-door vehicle, this Bronco now includes a four-door option, putting it squarely in the realm of the family SUV.

There’s no doubt that Ford is gunning for the Wrangler, brazenly pitting the Bronco head to head with its veteran competition during the media launch in Austin, Texas. Where better for a rough-and-tumble SUV than the Lone Star State? I had a chance to drive from downtown Austin to the outskirts of Llano, where Ford has built one of several Bronco Roadeo (yep, spelled just like that) courses for customers to enjoy.

I had heard the buzz about the Bronco — there was no way to miss its ubiquity in automotive news — and I went into the drive feeling intrigued but unsure. I didn’t know if the 2021 Ford Bronco would live up to the hype. But I was about to find out.

Good On-Road but Made for Off-Roading 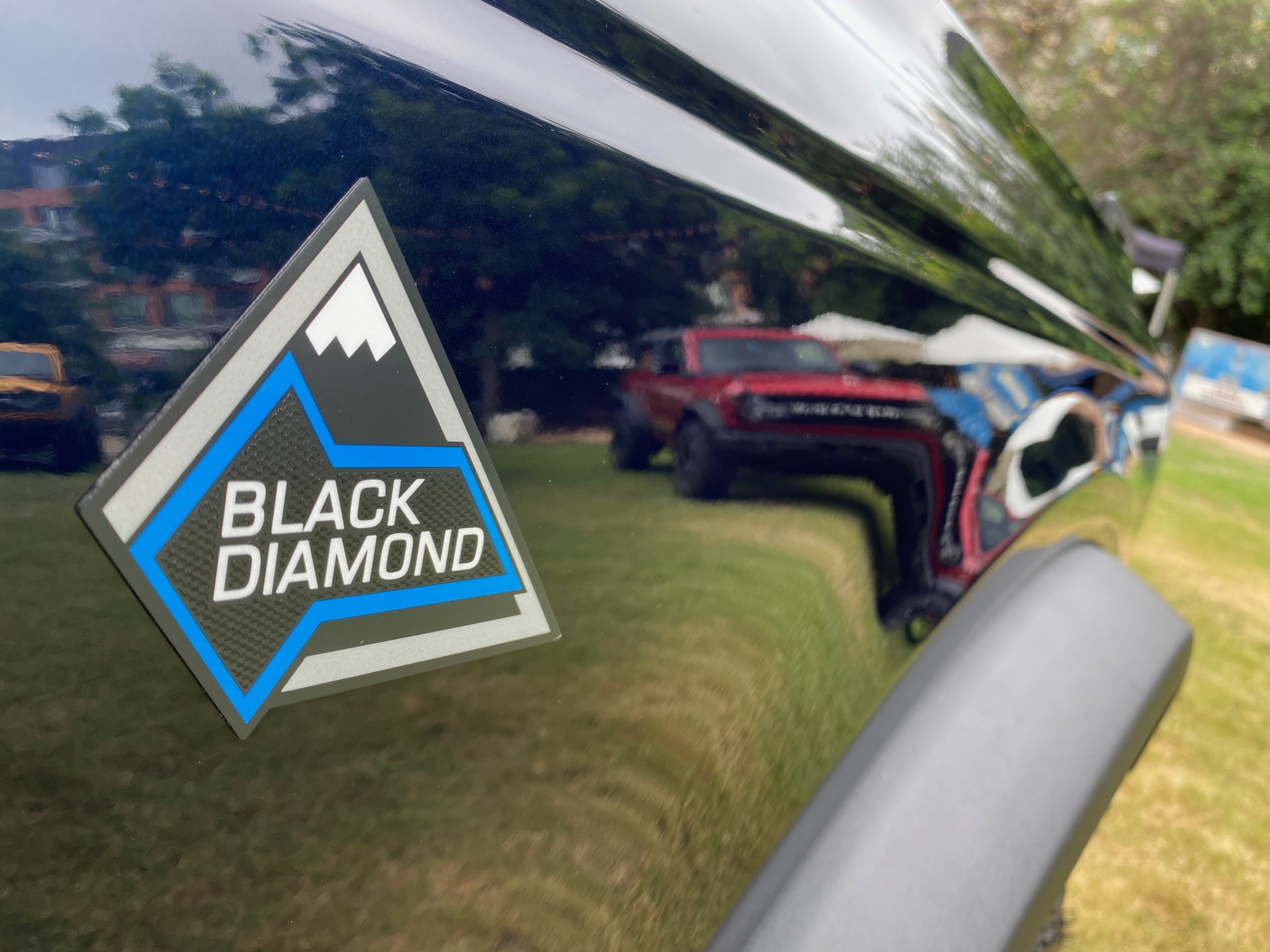 We compared notes from the drive and agreed on three things. First, the cornering was a little loose, more noticeably so on the four-door version. Second, the tires felt giant and formidable. And third, the celebrity factor was unmistakable; when we stopped in Marble Falls for chocolate meringue pie at the famous Blue Bonnet Bakery (totally worth the slight detour), people were snapping photos and taking video as we drove through town. I mean, we were somewhat conspicuous in matching-color Broncos.

Overall, the 2021 Ford Bronco was fine on city streets and sweeping highways with the 10-speed automatic transmission. Cruise control worked the way it’s supposed to, and while it felt big, the haunches of the Bronco were firmly planted.

Chief Program Engineer Eric Loeffler, who spent many years working on the Escape and the EcoSport, says the Bronco development was the highlight of his 33-year career. The new SUV is built on a modified Ranger platform and definitely has a truck-like feel on the road with its body-on-frame setup. The “baby Bronco” — the smaller and not-nearly-as-brawny Bronco Sport — is positioned on an Escape platform and is much different.

I had a feeling that going off-road would reveal the real personality of the Bronco. If its on-road manners were the mild-mannered Bruce Banner, the off-road Hulk was surely going to emerge in the best of ways. 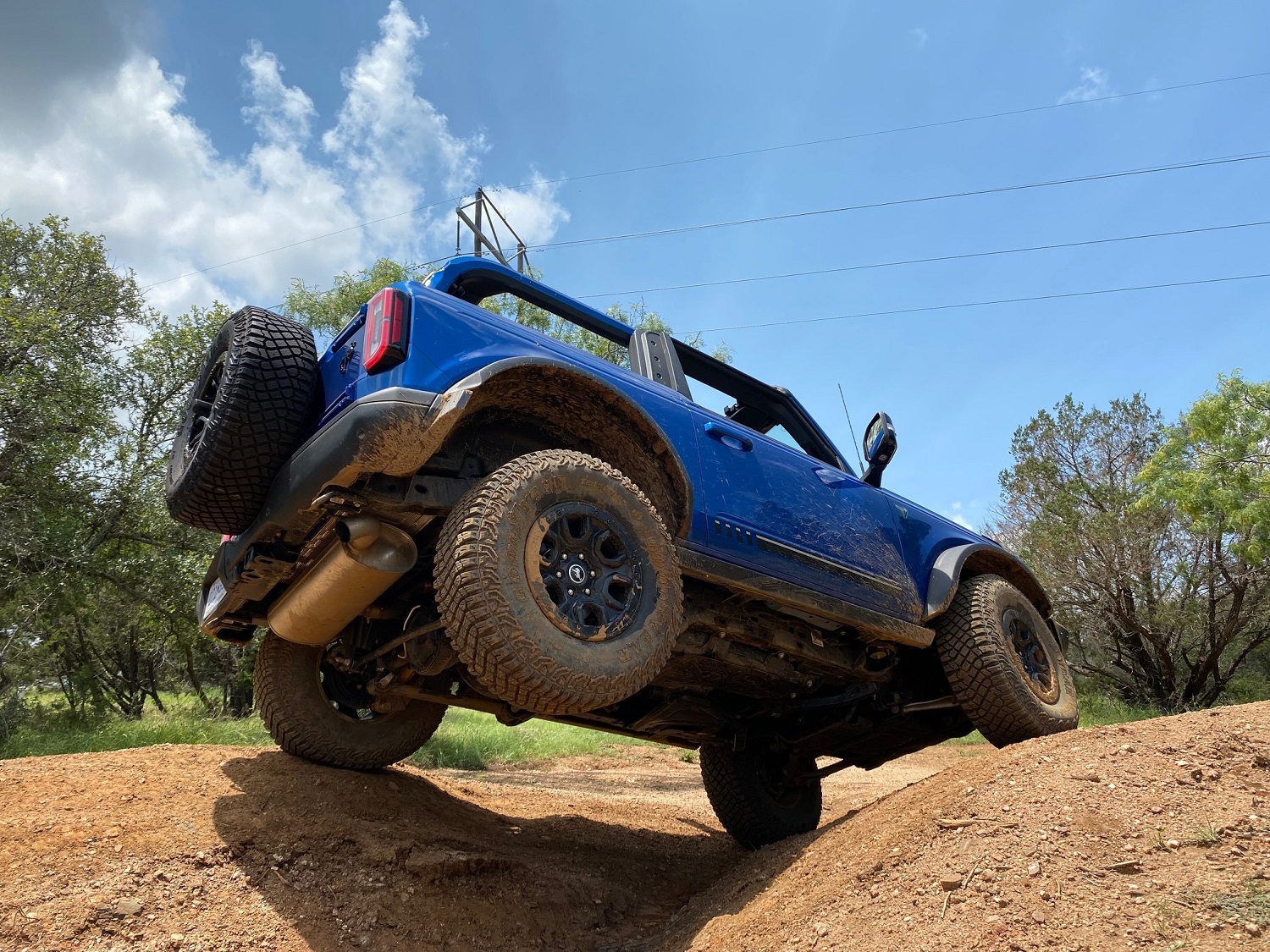 Three separate off-road courses were available at the Roadeo, each named for the hot peppers Texans love: Jalapeno, Habanero, and Ghost Pepper. I was in the group that started on Ghost Pepper, which turned out to be my favorite course. I live for this kind of rock crawling, dirt hill scaling, hard-core off-roading, and the 2021 Ford Bronco impressed me from start to finish. I was not concerned by anything, and my confidence increased rapidly as I drove.

My first run out was in a Wildtrak two-door Bronco, which was made for speed and didn’t include the stabilizer bar disconnector. That particular feature, which is standard on the Badlands and First Edition trims and adds increased articulation, would have made a slight difference, but the Wildtrak was more than capable without it. The Sasquatch package, which is available with any trim starting from the base model, comes with front and rear lockers. 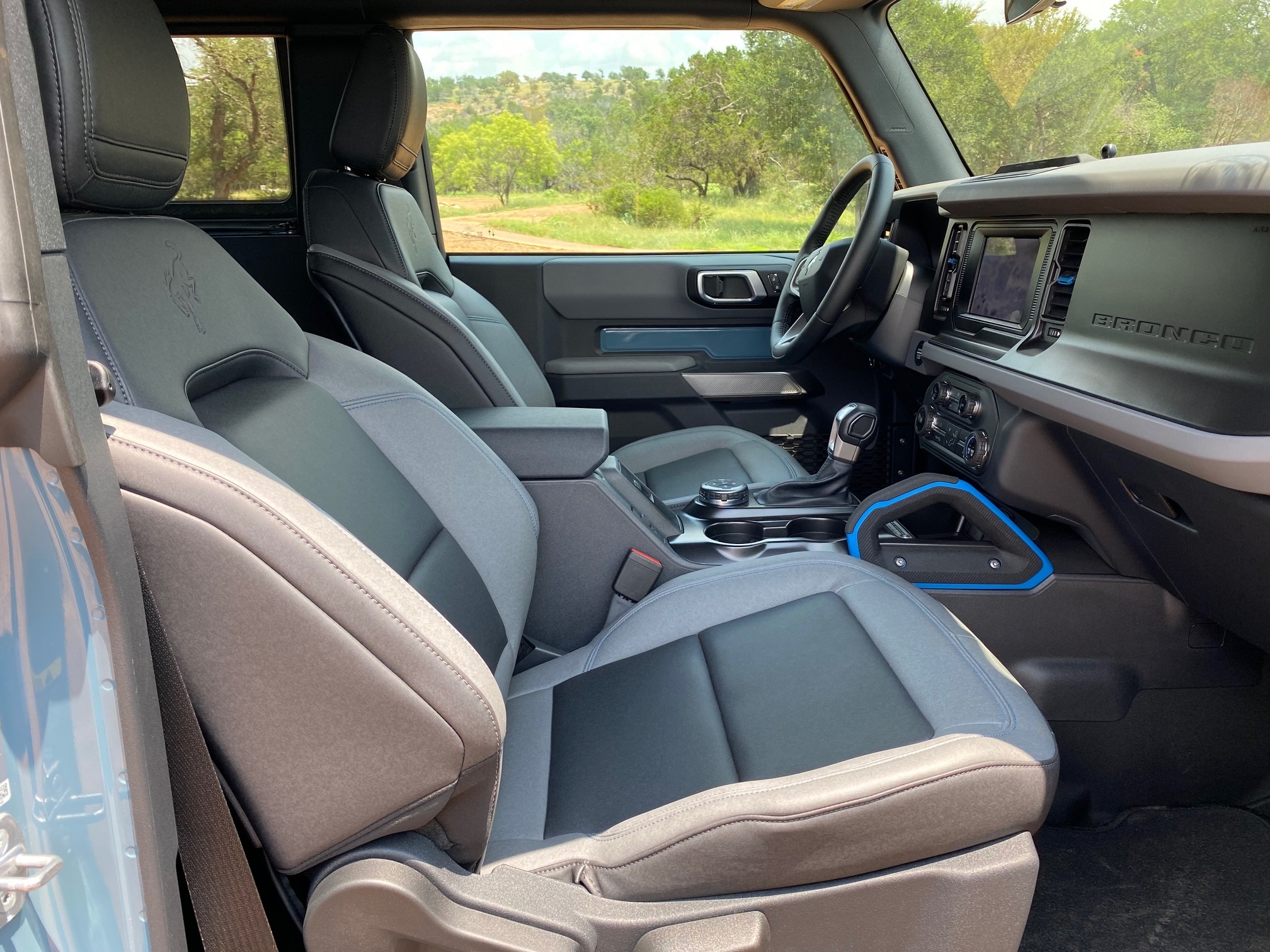 Another feature you’re going to want is Ford’s Trail Turn Assist, which applies the brakes to the inside rear wheel to decrease your turning radius. You can only use it if your Bronco is set to 4H or 4L mode and the rear locking differential is disengaged. It’s also only going to click on if you’re going less than 12 mph and the steering wheel is almost fully turned to the left or right. I saw this feature in action in a sandy patch where the Bronco gleefully spun around on demand.

All of the trail controls,  including the lockers, sta-bar disconnect, and trail turn assist, are called “hero buttons.” They’re located on top of the dash within easy reach and engaged quickly. 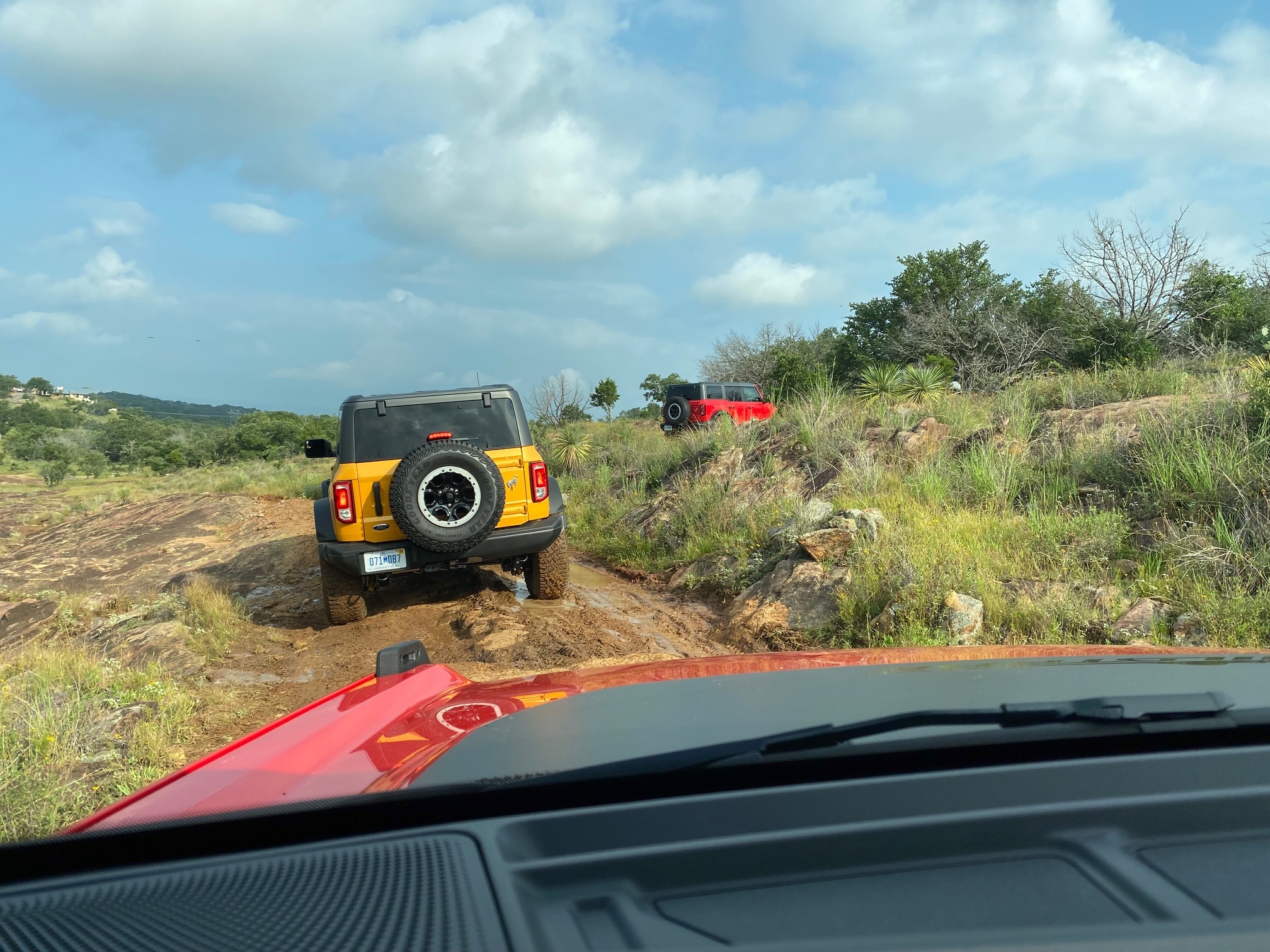 Ford veteran and marketing pro, Mark Grueber, says the Bronco has the wildness of a Mustang and the toughness of an F-Series truck. Formula D champion Vaughn Gitten Jr. along with fellow Baja/off-road experts Loren Healy and Brad Lovell, were on hand at the Bronco course to illustrate that statement.

From the passenger seat, I felt like we were doing at least 60 mph when they blasted off, catching air on the first hill, but they were keeping it right around 40 mph for most of the drive. On uneven dirt terrain, that’s pretty quick.

For sandy drives, the desert-running Wildtrak variant was best suited to the terrain with the addition of a Baja G.O.A.T. (Goes Over Any Type of Terrain) mode. The monster tires of the Sasquatch package, standard with the Wildtrak trim, chewed up the terrain like a bulldozer on treads. 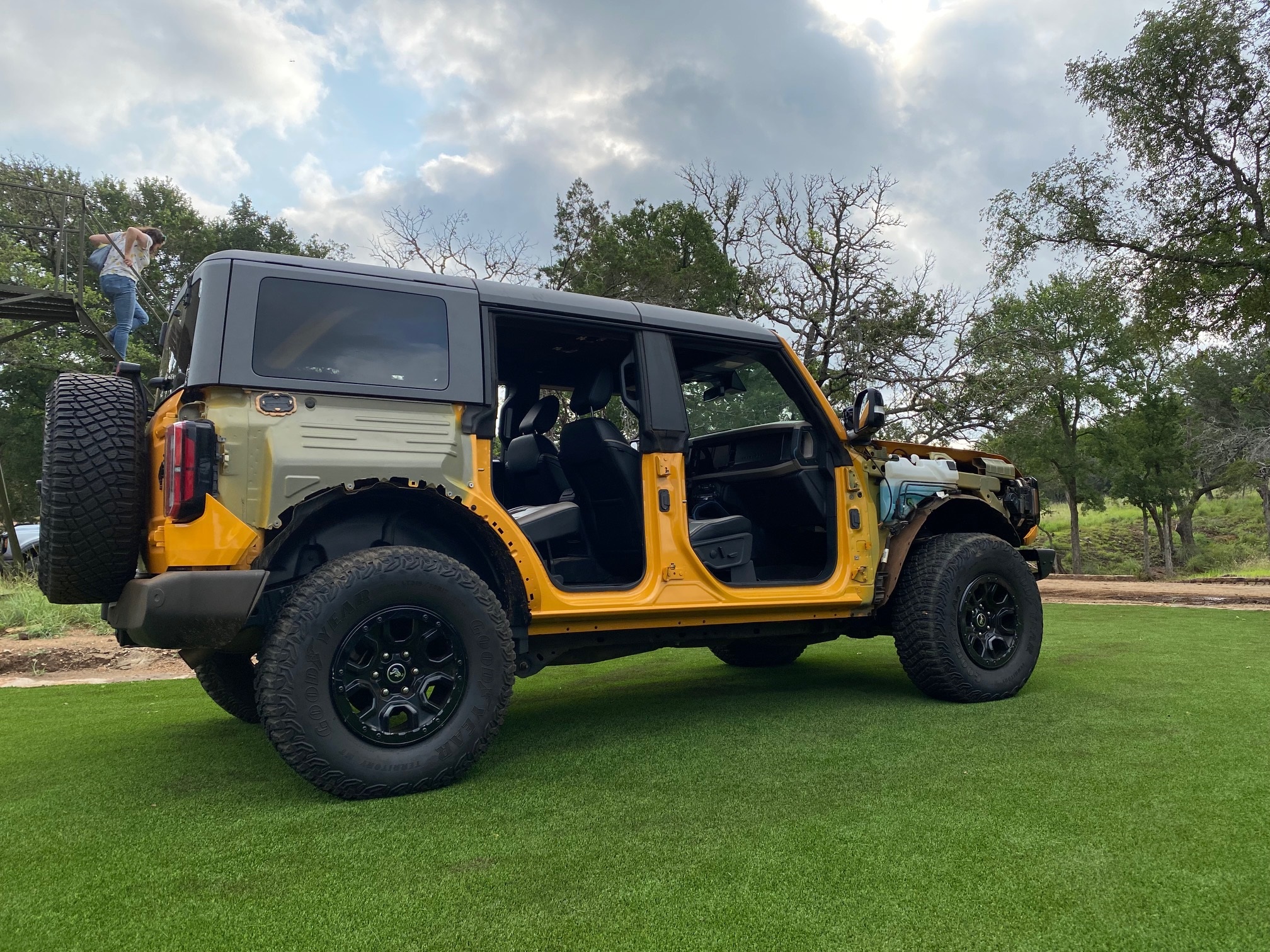 Let’s talk a little about the modularity of the 2021 Ford Bronco, which Grueber says is like “a LEGO set for adults.” The SUV comes with its own set of tools in a handy Bronco-stamped case, and Ford makes it easy to see which bolts are removable and adjustable: they’re stamped “Bronco.”

The doors on the two-door version weighed in at a hefty 60 pounds each, even though they are frameless and mirrorless. That’s 10 pounds lighter than a Jeep Wrangler door if you’re keeping score. On the four-door Bronco, the doors are closer to 40 pounds each, which is definitely more manageable.

Ford’s big coup is that the mirrors are mounted to the body instead of the doors, so you get to keep those even if you take the Bronco apart. The downside of that, however, is that if you’re on a tight trail, the mirrors could get ripped off anyway. 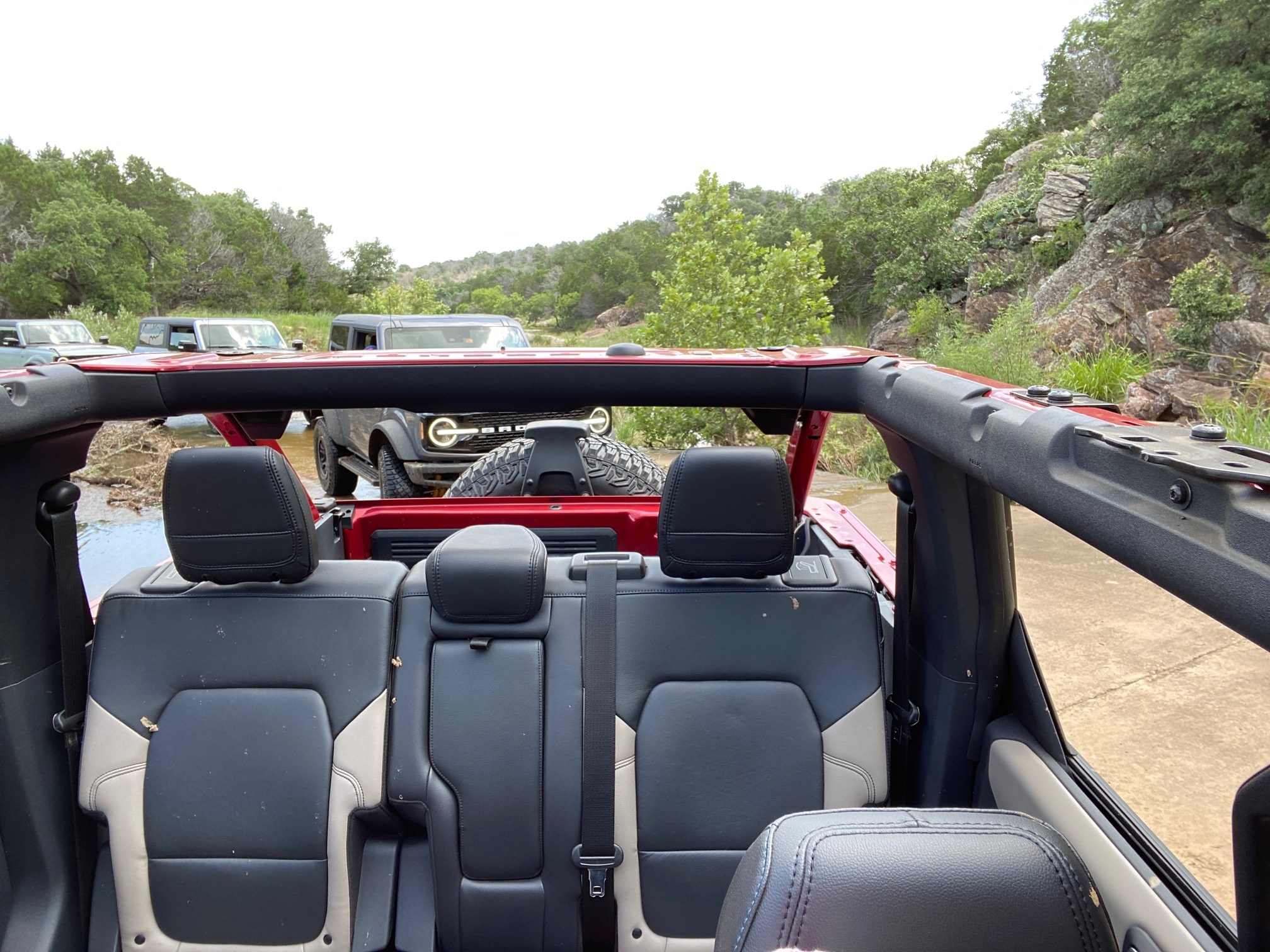 Ford planned for door removal by including storage bags. These bags are stacked together in the cargo area for easy access so you can whip off the doors and other panels even when you’re on the move.

I found that the two front panels of the Bronco, weighing about 15 pounds each, were easy to remove. The rear panel, however, definitely required two people. And ideally, they need to be taller than I am (5’5″) to lift and walk the panel off the back end comfortably.

If you’re an active off-roader, you might appreciate that you can remove the front and rear fender panels of the Bronco. Simply pull them off before hitting the trail to keep them from getting scratched up. 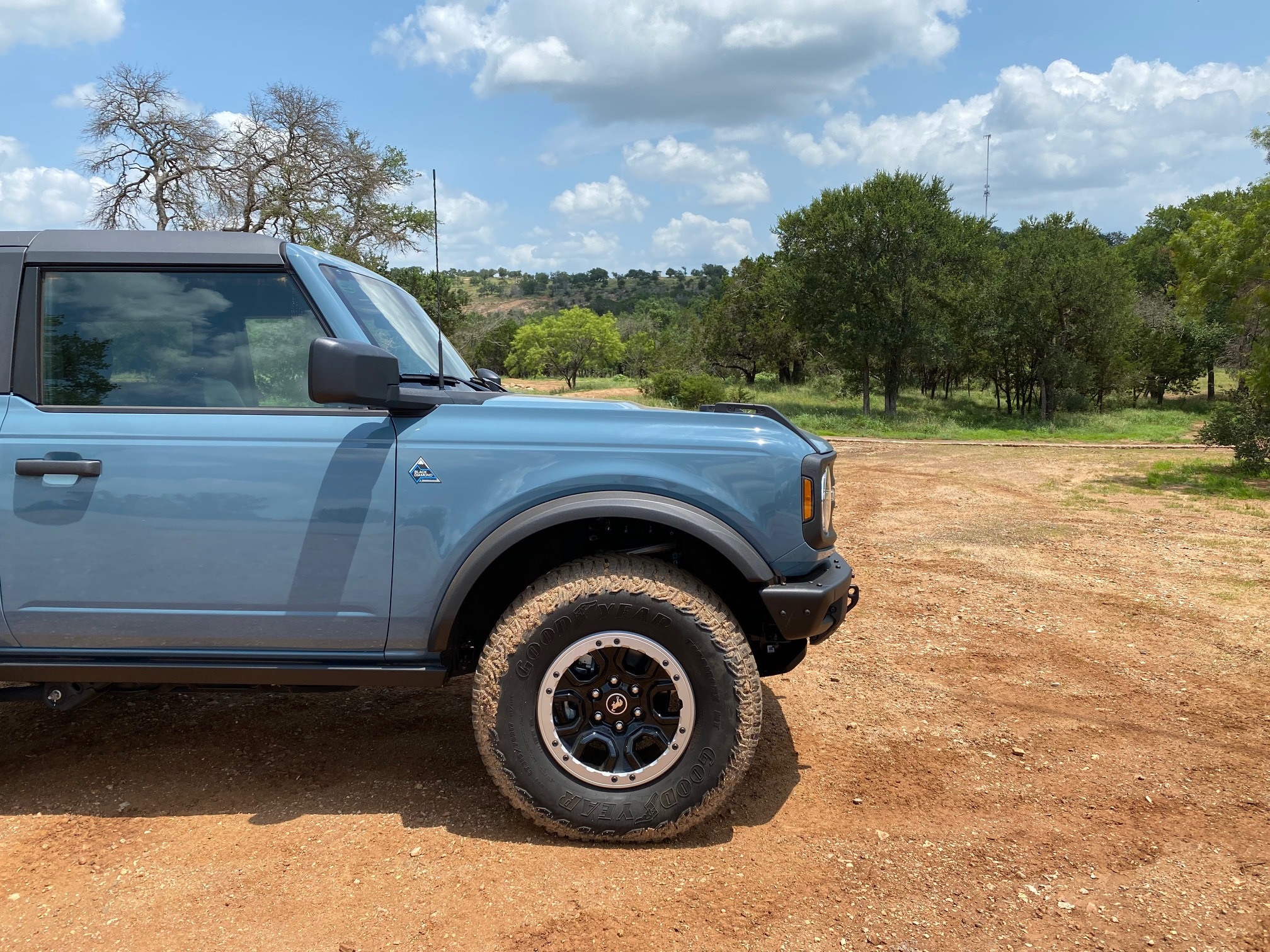 Frankly, I didn’t think I’d fall so hard for the 2021 Ford Bronco. I didn’t have a particular affinity for the old-school Broncos though I thought they looked cool. The 2021 version of this classic transcended its history and lived up to the hype. If you’re willing to wait for it, this is a vehicle that is incredibly fun to drive, and the price point is reasonable.

My best advice: get the Badlands trim, which includes the Sasquatch package. Definitely be sure to get the 12-inch touchscreen so you’ll benefit from the front-facing camera. And get the hardtop because it’s quieter in-cabin than the soft top.

And go get it dirty. Regularly. If you do, you’re going to want to take a look at the wash-out interior with vinyl seats. But most of all, don’t miss your chance to take it out for a run at one of the Ford Roadeo sites and see what it can do.

Base Model: A 7-speed manual transmission, four-wheel drive, and an electronic two-speed transfer case are standard, along with a turbocharged 2.3L EcoBoost inline-4. If you want more power and don’t wish to row your own, a 2.7L EcoBoost V6 engine and 10-speed automatic are optional. Five of the seven available G.O.A.T. (Goes Over Any Type of Terrain) driving modes and all-season tires wrapped around 16-inch steel wheels are included. Cloth seats come with the base model along with an 8-inch touchscreen (which will feel very small and inadequate once you’ve seen the 12-inch version).

Big Bend: This trim gives you the same engine options as the base model and tacks on an additional G.O.A.T. driving mode. The 17-inch aluminum wheels match the carbonized gray grille, and a leather-wrapped steering wheel and shifter amp up the interior.

Wildtrak: The Sasquatch package is standard on this trim, adding 35-inch mud-terrain tires and locking front and rear axles. Bilstein dampers add to the smooth ride, and Baja mode makes its debut as one of the G.O.A.T. modes. On-demand 4H engagement is standard, as are heated cloth seats and carpeted flooring.

Badlands: The Badlands trim is my favorite. It comes with an exclusive suspension system designed to tackle all kinds of rough terrain and includes a sweet hydraulic front sway-bar disconnect. A Rock Crawl G.O.A.T. mode is added to the mix, and a hardcore steel rear bumper protects your SUV from the terrain. For serious off-roaders, this is the best option, especially if you add the monster tires and other capabilities of the Sasquatch package (33-inch tires on 17-inch aluminum wheels are standard with the Badlands trim).

First Edition: Only 3,500 total of the First Edition will be built, and they’re loaded with everything the Badlands includes, plus the Sasquatch package. A stellar 10-speaker Bang & Olufsen sound system is included on all First Edition models and which also get adaptive cruise control, a wireless charging pad, and special badging to bring to the party.


Ricky Bobby Strikes Back: Dodge, Sony Collab on Film's Anniv...
2021 Honda Civic Type R Review: One Last Dance With The Quee...
Land Rover Helps Those Who Help Us: Defender Above & Beyond ...
2021 Ducati Scrambler Nightshift: A Classic Gets a Stealthy ...
The Best of 2021 Kia
The Best 2020 Cars Kia Has to Offer